The CAPA World Aviation Outlook Summit 2018 on 27-28 November in Berlin will include a panel discussion on the commercial outlook for airlines and their revenue optimisation strategies. This report provides some background for that discussion.

Unbundling – dividing the product or service into separate elements and selling them each at a different price – is a profit maximisation strategy primarily aimed at segmenting the market and attracting the more price sensitive customer.

Customers who are not prepared to pay for a traditional airline ticket – one that, even in the economy cabin, normally includes elements such as checked-in bags, assigned seating, onboard catering and inflight entertainment – represent lost revenue.

If those price sensitive customers are happy to pay a lower price for the airline seat only and to forego all the other elements, then unbundling attracts incremental revenue that the airline would otherwise have missed.

FSCs have followed LCCs in unbundling

Unbundling was pioneered by low cost airlines, starting with Southwest Airlines in the US and then adopted by the likes of Ryanair and easyJet in Europe, AirAsia in Asia and many others around the world.

The success of LCCs, and the consequent loss of market share by full service carriers, has prompted the almost universal adoption of unbundling by FSCs.

This started with short/medium haul flights but now, prompted by the growth of long haul low cost competition, has expanded to include many examples of long haul flights where FSCs offer hand baggage only (HBO) fares.

For FSCs, unbundling allows them to offer a basic fare that can look competitive with the LCC offer and to capture at least some portion of the more price sensitive end of the market.

Typically, FSCs do simplify the process by designing fare families that vary in price and also the extent of unbundling/bundling included in the price.

At the same time, LCCs have added bundled fares and fare families to their offer, in order to appeal to the less price sensitive passengers (often, although not always, business travellers). This is a way to maximise yield by charging for features such as assigned seats, checked-in bags, schedule flexibility and priority boarding.

In many cases features such as assigned seats, priority boarding and flexibility were not offered at all by the more purist LCCs in the past. This means that today's LCC bundled fares not only group together product features previously sold separately, but also product features not previously available.

All these features are also now available to all customers on an unbundled basis and passengers are prompted to add features after booking, all the way up to boarding (a practice also used by FSCs). Successful conversion is great for revenue maximisation, since buying a number of features separately is usually more expensive than buying the right bundle at the outset.

With both FSCs and LCCs now offering unbundled fares, fare families and branded fares, the differences between their product propositions are not as distinct as they once were.

Unbundling can dilute an FSC brand

For FSCs, one of the challenges resulting from unbundling is to maintain the airline's brand value. If passengers have been accustomed to all-in fares, it can be damaging to the brand if features are separated out and sold for an additional fee.

For example, when British Airways stopped offering free onboard catering on its short/medium haul flights in 2017, introducing paid-for Marks and Spencer sandwiches, this led to much negative comment and media coverage.

A related problem is that unbundling adds to the focus on price as the main dimension of competition, reinforcing the commoditisation of air travel and undermining the role played by brands in seeking to differentiate an airline's offer from that of its rivals.

FSCs must limit the availability of unbundled fares

A further challenge of unbundling by FSCs is controlling the availability of the lowest unbundled fare. In general, additional product features do not significantly alter the cost base (with the obvious exception of onboard items, such as food and drink, where the cost is directly recovered, with a margin, through the sale).

This means that, in itself, unbundling does not lower the unit cost (certainly not to the same extent that the fare is lowered) and the lowest unbundled fares are likely to be below the operating cost (although possibly not below the marginal cost), particularly if they are to be competitive with LCC fares.

As a result of this, and for brand integrity, the supply of such fares must be limited. This can frustrate passengers attracted by a headline fare, only to find it unavailable.

This reflects the inescapable reality that, for all the blurring of lines between what FSCs and LCCs offer to the marketplace, the unit cost differential remains significant.

This means that LCCs, and in particular ultra LCCs, can afford to offer a much higher proportion of their seats at the lowest fare.

When fuel prices were falling, fares fell at a slower rate, partly thanks to ancillaries

Airline initiatives to lower unit costs were softened in the period of lower fuel prices from 2015 to 2017, when ex fuel CASK changed little, according to CAPA calculations based on global data from IATA.

Although falling fuel prices went hand in hand with lower fares as airlines passed on some of the benefit to customers, unit revenue (RASK) did not fall as quickly as total CASK and so, margins widened.

Growing ancillary revenues helped to offset part of the impact of lower fares and further underpinned airline profitability. With fuel prices now rising, it may not be possible to recover all of the additional cost through fare increases and so, ancillaries will remain an important focus.

However, much of the growth of ancillary revenue in recent years has been due to unbundling, rather than to genuinely new activities that grow the overall revenue pool for airlines.

Data from IdeaWorks/CarTrawler estimate that ancillary revenue grew from 4.8% of total airline revenue in 2010 to 10.6% in 2017. The biggest segment, also with the fastest growth, was what it calls 'A la Carte' revenues, which are almost all items that were previously part of the core ticket price for FSCs.

World airline industry: ancillary revenue as a percentage of total revenue, 2010 to 2017e. 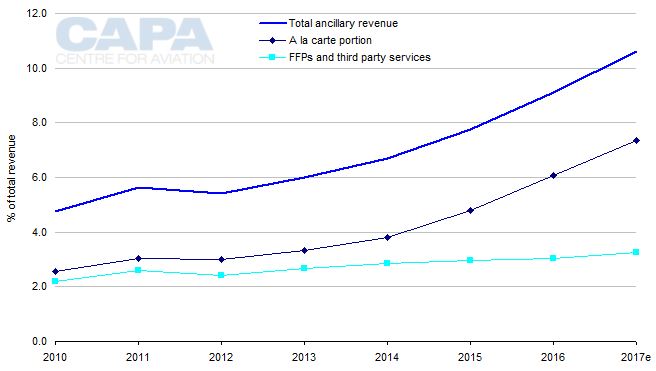 The twin commercial challenge for the airline industry involves both maximising core revenue through the right mix of unbundled fares and bundled fare families and developing genuinely additional, and sustainable, revenue streams.