It is the decade the global airline industry would rather forget – USD56.6 billion in combined net losses (or a net margin of -1.4%) between 2001 and 2010, according to IATA’s latest industry outlook. This decade, the airlines will have handled just under 20 billion passengers. Therefore, airlines have lost USD2.83 for every passenger boarding an aircraft this decade.

It started with USD13 billion in net losses in 2001 as the dot.com bubble burst and the world was shaken by September-11. There were only two profitable years (2006 and 2007) in the intervening period before the ‘Great Recession’ exacted an even heavier toll on airlines, with losses of USD16.8 billion in 2008 (revised up from USD10.4 billion), USD11 billion in 2009 (up from a previous estimate of a USD9 billion loss) and USD3.8 billion predicted for 2010. 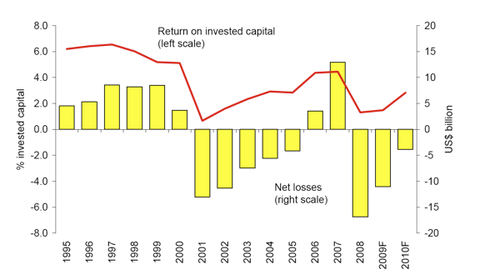 Industry revenues for the year are expected to fall by USD80 billion (or 15%) to USD455 billion, as worldwide passenger traffic declines by 4.0% and cargo by 14%. Yields are expected to fall 12% for passenger and 15% for cargo, compared to declines of 7% and 11% respectively in the previous IATA (June) forecast. The fall in passenger yield is led by the 20% drop in demand for premium travel.

Spot oil prices have been driven up sharply in anticipation of improved economic conditions. Oil is now expected to average USD61 per barrel (Brent) for the year (up from USD56 per barrel in the June forecast). This will add USD9 billion in cost for a total expected fuel bill of USD115 billion.

IATA’s Director General and CEO, Giovanni Bisignani, stated that while larger carriers have built-up sizeable cash reserves, the outlook for small and medium sized carriers - with limited options to raise cash - is “much more severe”.

Airlines are in a fight for survival. Mr Bisiginani stated that “conserving cash, careful capacity management and cutting costs are the keys”.

Structural changes will touch everyone

IATA stated there is “little hope” for an early recovery in yields in either the passenger or cargo markets”, noting the reductions will “leave a lasting mark on the industry’s structure”.

The industry body noted a “key uncertainty” for the future is whether this premium demand will return, adding even if a large part of the fall in premium ticket demand is cyclical, “average fares for all classes have also fallen sharply as excess capacity has intensified competitive pressures”.

IATA noted that declines in yields are usually structural. Industry revenues are not likely to return to 2008 levels until 2012 at the earliest.

Mr Bisignani stressed the entire aviation value chain must be prepared for change and to cut costs and improve efficiencies. He also said governments need a wake-up call to create a policy framework that supports a competitive air transport sector capable of driving economic expansion.

Mr Bisignani concluded, “we don’t want bailouts. But we need governments to look more seriously at this sector by (1) investing in efficient infrastructure, (2) replacing the proliferation of environmental taxes with a global solution for the environment and (3) giving airlines normal commercial freedoms to merge where it makes sense and to access markets and global capital like any other business”.