Although airlines on the whole are financially stronger and becoming more countercyclical than at any previous time, investors often ask if an airline plans to spin off its loyalty programme. The perceived opportunity is for an airline to generate short term cash and reduce management distractions in what are typically complex organisations.

Yet the increasingly common view is that loyalty divisions – like an LCC subsidiary – are too valuable for total control to be given up. These units are core to an airline, unlike previous assets (hotels, GDS stakes) that airlines have disposed of. Loyalty programmes are a licence to print currency.

Through design, and accounting, they are almost always profitable – so selling them off creates revenue conflict between the airline and loyalty programme shareholders. The advantage is that outside ownership and management can bring loyalty programmes the innovative environment they need to benefit the airline but can also, increasingly, achieve the new objective: utilising data.

The topic "The FFP Trinity: data, loot and loyalty: Using data to generate revenue" will be discussed at CAPA's Airline Leader Summit at Dublin's Powerscourt on 17/18-May-2018, with MORE THAN 13 AIRLINE CEOs in attendance

One argument to spin a loyalty division off and/or bring in outside management is that loyalty programmes need to be in a different business culture from airlines, which are asset-intensive, and through safety priorities are highly risk-averse – even in making non-safety decisions.

Loyalty programmes, the argument goes, should be more similar to industries ranging from tech companies, to finance, to consumer goods. That can attract talent, but can also foster the right environment to innovate and take risks.

The downside is the considerable loss of influence and control, amplified by airlines already being relatively sensitive to control.

Airlines recognise the need to improve their loyalty programmes, but only sometimes recognise the urgency. Although airlines may lack a medium term improvement plan, they have a long term vision – or at least recognise theoretical opportunity. That is precluding them from spinning off the programme.

In the previous decade from 2000, through the 9/11 downturn and then the global financial crisis aftermath, airlines sold off their business units.

Loyalty may be seen by investors as yet another unit that can be disposed of to generate cash. Earlier sell-offs were typically distant units or investments, such as hotels or stakes in a GDS. These may not have been long term decisions (the sale enabled urgent cash flows or reduced management burden/distraction).

Selling a loyalty programme, however, is selling a core unit. Even if it can be given its own public P&L, a loyalty division is tied to its airline. Like a low cost unit in a dual brand strategy, a loyalty programme is perceived by many airlines to be too valuable even to consider selling in whole or part.

Not all airlines have a dedicated business unit for their loyalty programme. Loyalty is sometimes grouped with ancillary revenue. There is rare public disclosure of loyalty programme P&Ls but when disclosed it is almost always a profit, since loyalty programmes are designed – through operation and accounting – to be profitable.

One of the few publicly disclosed loyalty businesses is at Qantas, where its loyalty division is nearly guaranteed to be profitable due to internal calculations that allow points to be redeemed at a lower cost than they are issued (“billings” on the chart below). This comfortable gap (“margin on points”) is one of the loyalty division’s profit pools. In essence: so long as tickets are purchased, irrespective of eventual profit from flying that passenger the frequent flyer division bills the airline segment for issued points, and the programme generates a profit.

There is a trend towards traditional frequent flyer businesses moving towards more non-flying earning opportunities, including credit card companies. Many such programmes have thus become broader “loyalty” offerings, since flying to earn points may not be as frequent as other earning options.

Yet flying remains aspirational and key to reward programmes, meaning their revenue value to the airlines far outweighs the value perception of the passenger.

Some airlines – such as LCCs with infrequent repeat passengers – are shifting to the term "rewards" programme, since infrequent passengers may not perceive the benefit of "loyalty" but are attracted to the concept of constant rewards. 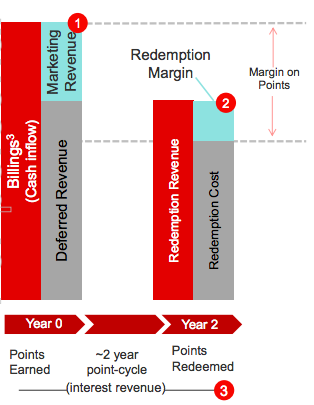 This standard accounting for a loyalty division creates challenges if loyalty is separated from the airline. Since the airline is paying the loyalty division for points that passengers earn but will redeem at a lower value (if redeemed at all), the airline loses money on a strict accounting basis, before considering other benefits (marketing, network value, etc.)

If the loyalty division is wholly owned within an airline group the financial discrepancy is minimised, since the group-level P&L is unaffected. The airline and loyalty divisions may compete with each other, but proper group governance should ensure the best outcome – not for a division, but for the group. This is not too different from the principles of a group managing a dual brand strategy, which requires the group to ensure that its flying brands act in the interest of the group.

Avoiding conflict requires work and time but is theoretically easy, since the loyalty and other divisions are 100% owned by the group. There is a leap in complexity and conflict when an airline does not own 100% of its loyalty division, such as when the division is spun out and has an outside investor, or is moved to a sister division with similar but still separate ownership.

Some examples of airlines with different loyalty ownership (but that do not necessarily have or experience the generic challenges referenced in this report) are:

Airlines that do not have 100% ownership of their loyalty programme may be hesitant to engage in promotions that benefit the loyalty programme but not necessarily the airline. At worst, this can give rise to conflicts.

That will result in the airline having to debit funds for earned points for passengers who may not want to be members and may travel infrequently – possibly never again. The loyalty programme will book a profit on the points, whereas the airline perceives the situation as throwing revenue away.

Loyalty programmes are a gateway to greater customer data and insight

The loyalty programme conversation is evolving away from traditional rewards, recognition and low level marketing. The target is the vast – and for many airlines, probably unknown – field of data and savvy marketing opportunities that can result.

Whereas loyalty was once the objective, it is now a means to an end.

FFPs, loyalty programmes and airline strategies will be analysed in a panel discussion on 17-May-2018.
The discussion will be led by Evert de Boer, Partner, FFP Investment and Advisory and author of the industry-leading book, "Strategy in Airline Loyalty"

Ever since Air Canada first floated the concept of combining loyalty with using the FFP entity as a revenue centre in its own right, there has been an uneasy and highly dynamic equilibrium between maximising income and generating loyalty. Later came the recognition that there was intrinsic value in the intimate data that passengers delivered – even those whose loyalty was limited at best.

Today, any FFP that does not maximise the benefits from analysing and applying the data it gathers is falling short of its potential. Finding partners who can expand datasets and help in the analytics process is increasingly a must.

This is one of the data-related topics for discussion, following an opening session about data from loyalty and other areas of business:

Keynote. Who provides the data, who collects it – and who knows how to use it?

A keynote address from the author of "Data for the People: How to Make Our Post-Privacy Economy Work for You" and Director of the Social Data Lab.

"My expertise is the future of big data, social-mobile technologies, and consumer behavior. I study people and the data they create. In today's increasingly digitized world, consumers share data in unprecedented ways. This Social Data Revolution represents a deep shift in how people make purchasing and lifestyle choices."

Panel: who provides the data, who collects it - and who knows how to use it?

Data has become about a lot more than collecting information that your own customers provide you. Every step we take, every move we make is contributing to massive databases that provide the basis for a level of transparency that we could not have dreamt of as recently as a couple of decades ago. This is in many ways fearsome, as much of our business structuring has been built around an absence of transparency, allowing some form of manipulation of the customer.

But, as airlines - and their suppliers - seek to open up new distribution avenues that share key information, the ubiquity of data is beginning to threaten, to disrupt the existing system on a much broader scale. Let's build the history and try to project where things are going.