Revenues are being “further undermined by the need to aggressively discount fares to stimulate demand in a shrinking market”, according to AAPA.

Accordingly, Director General, Andrew Herdman, stated the region's airline industry “remains in critical condition, despite some signs of a modest recovery in traffic volumes in recent months”. He added, “even with the benefit of capacity cutbacks and other cost reduction efforts, airlines are still suffering heavy losses, and are focused on survival.”

AAPA members carried a total of 11.9 million international passengers in Aug-2009, down 2.9% year-on-year, although a noticeable improvement from Jul-2009’s 7.8% reduction and Jun-2009’s 16.5% reduction. Traffic (RPKs) in Aug-2009 declined 5%, indicating continuing weaker demand for long-haul travel, according to the industry body. RPKs started contracting in Aug-2008, so declines are now compounding. 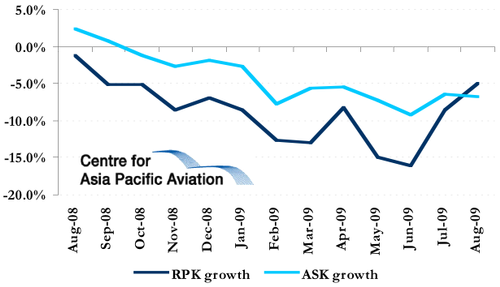 In positive news, the member carriers experienced 1.5 ppt improvement in international passenger load factor to 77.9% in the month (following a 1.7 ppt deterioration to 76.6% in the previous  month). Carriers reduced capacity (ASKs) by 6.7%. The load factor improvement is the first in over 12 months for AAPA airlines. 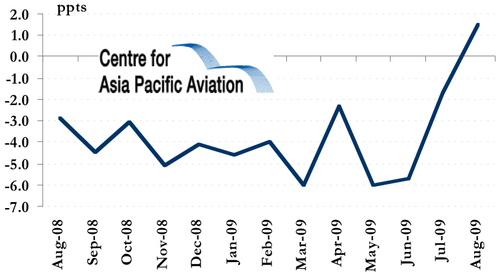 Air cargo traffic volumes are “slowly recovering, but remain weak”, according to AAPA.

In Aug-2009, AAPA international freight tonne kilometers (FTKs) were down 12.2%, a slight worsening from a contraction of 11.4% in the previous month, but an improvement from a cumulative decline of almost 20% in the eight months to Aug-2009. Matched by a 12.9% reduction in cargo capacity, the average international cargo load factor was 66.9% in the month. 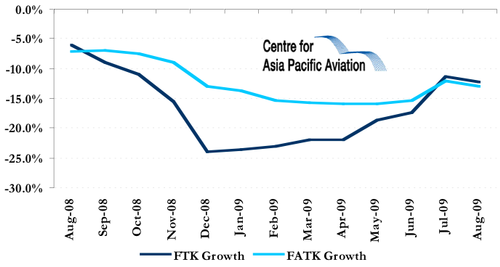 In attempting to navigate their way through the current crisis, Asia Pacific airlines have been cutting capacity, focusing on cost reduction efforts and discounting fares to stimulate demand. While this strategy has had some success in stimulating demand in a shrinking market, it has also placed considerable pressure on yields, which will further undermine revenues and affect profitability.