As full service airline groups rapidly expand into the long haul low cost sector, questions on whether to include LCC subsidiaries in intercontinental JVs naturally emerge. Scoot’s upcoming launch of service to Berlin adds urgency to bringing Scoot into the JV that Singapore Airlines and Lufthansa launched in 2017.

The Singapore Airlines-Lufthansa JV currently includes SIA's full service regional subsidiary SilkAir but excludes the LCC subsidiary Scoot. SIA and Lufthansa are now working to add Scoot to the JV, a sensible move as it will enable Scoot to start cooperating rather than competing against Lufthansa.

SIA began codesharing with the Lufthansa LCC subsidiary Eurowings in 2017 but Lufthansa does not yet codeshare with Scoot. There is also no relationship yet between Scoot and Eurowings, which has been expanding in Berlin – opening up the possibility of Scoot using Eurowings to feed its new Berlin-Singapore flights.

The Lufthansa Group and Singapore Airlines (SIA) forged a joint venture agreement in Nov-2015 and commenced the JV in Oct-2017, following a lengthy approval and implementation process.

With ATI immunity, Lufthansa and SIA would be able to start jointly pricing itineraries from Malaysia and Indonesia to the four European markets via Singapore. Lufthansa and SIA already engaging in joint prices from eight cities in Australia, which are served by SIA or its regional subsidiary SilkAir.

Lufthansa and SIA share revenues on all trunk flights connecting their home markets. For itineraries connecting beyond Singapore, Germany or Switzerland to markets outside the JV only the Singapore-Germany/Switzerland segment is included.

In addition to jointly pricing flights, the two JV partners have started to coordinate schedules and align corporate sales programmes. The coordinated schedules are designed to improve connectivity and reduce transit times.

Capacity under the JV increases as Lufthansa launches Singapore-Munich

The Lufthansa Group and SIA have both added capacity in the Singapore-Europe market since forging the JV.

Lufthansa launched on 27-Mar-2018 a new five times weekly service from Munich to Singapore with A350-900s, generating 2,930 weekly seats. The new flight increased the capacity covered under the JV by 9% to 34,690 weekly return seats.

Lufthansa Group subsidiary SWISS increased capacity on the Zurich-Singapore route by 55% in 2017 as it replaced A340-300s with larger 777-300ERs.

SIA added capacity to Germany in Jul-2016 as it launched three weekly flights to Dusseldorf using A350-900s. SIA added a fourth weekly flight on the Singapore-Dusseldorf route on 27-Mar-2018, which resulted in a further 1.5% increase in capacity covered under the JV. 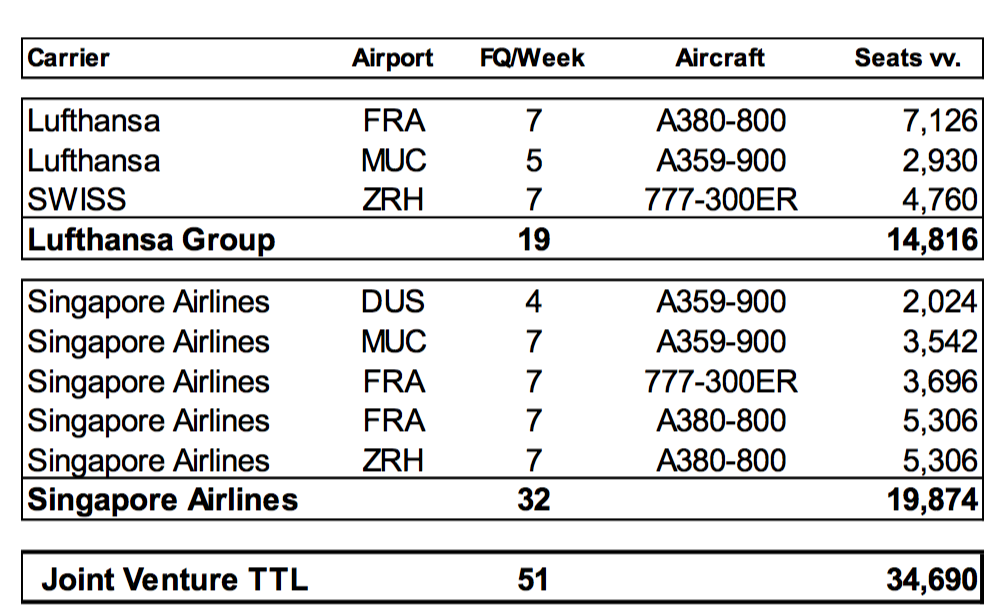 As the above chart highlights, SIA currently has 5,000 more seats than Lufthansa on the JV routes.

However, the actual gap is less because passengers that continue to New York on SIA’s daily A380 flight to Frankfurt are excluded from the revenue sharing pool. Lufthansa Group has a separate transatlantic joint venture with United and Air Canada, making it impossible to cooperate with SIA in the North American market.

Scoot could be added to the Lufthansa-SIA JV

SIA LCC subsidiary Scoot is also now excluded from the JV. However, Lufthansa and SIA are working to add Scoot and its new Singapore-Berlin flight to the JV. Scoot is launching four weekly flights to Berlin on 20-Jun-2018 using 329-seat two-class 787-8s.

Adding Scoot has the benefit of removing a layer of complexity.

SIA is already selling Scoot’s Berlin flight under the new SIA-Scoot codeshare arrangement, which was implemented in late 2017. SIA is not selling the Scoot service in the local Berlin-Singapore market and is instead offering one-stop connections via Dusseldorf, Frankfurt, Munich and Zurich using Lufthansa Group. However, SIA is selling Scoot in the Berlin-Australia market, offering the Scoot flight from Berlin to Singapore and SIA operated flights from Australia to Singapore. SIA is offering this option at a significantly cheaper price and with faster overall transit times than two-stop Berlin-Australia connections under the JV using Lufthansa Group to operate the first leg (from Dusseldorf, Frankfurt, Munich and Zurich to Berlin).

Scoot is also selling in Berlin-Australia flights with both legs operated by Scoot. It is also of course selling in the Berlin-Singapore market, offering much cheaper fares than the SIA-Lufthansa JV (generally  less than half the price).

Adding Scoot to the JV would enable Scoot to cooperate with Lufthansa and further strengthen its ties with SIA. This is particularly important for passengers Singapore-Germany passengers with multiple stop itineraries. For example, a passenger originating in Singapore who visits both Berlin and Munich.

Lufthansa could also benefit from gaining access to Scoot short haul flights within Southeast Asia. SilkAir is already included in the Lufthansa-SIA JV. Lufthansa began codesharing to several SilkAir destinations in Asia Pacific (including Australia) after the JV with SIA was initially forged.

Scoot has several unique destinations in Southeast Asia that SIA and SilkAir now sell via their new codeshare. Scoot does not yet have any codeshare partner outside the SIA Group but Lufthansa would be a logical place to start.

Eurowings also has been expanding in Berlin since the demise of airberlin. A codeshare or interline between Eurowings and Scoot would be sensible as it would provide Scoot with feed beyond Berlin. Eurowings now links Berlin with nearly 20 destinations in Europe.

The anticipated addition of Scoot to the Lufthansa-SIA JV would be the first time an LCC is included in any of the Asia-Pacific JVs. However, it will almost certainly not be the first as full service airline groups continue to expand and launch LCC subsidiaries.