As unprecedented numbers of aircraft sit idle and airline coffers are laid bare by the pandemic, a lifeless and even dull environment for airline inflight product development might be expected.

But the reverse is true. The inflight connectivity (IFC) market is bustling with energy. Changes are afoot also in the way airlines are looking to configure new and existing fleets.

One outstanding trend is the greater focus on premium economy seating, as a reduction in business travel promises to reshape passenger demand and the airline yield profile.

There have been some big moves and new trends emerging, all tracked and made available courtesy of the newest edition to the CAPA Fleet data offering: The CAPA Aircraft Interiors Database.

This short report highlights some of the major innovations are under way in Wireless inflight entertainment (IFE), seat amenities and seating products.

Key Fact #1: Chinese airlines are stepping up to take leading roles innovating with IFE to be more competitive

Many of the major recent developments in inflight product are coming out of China. This has been helped as the Chinese domestic market has been among the least affected domestic markets by the coronavirus pandemic.

After years of all talk and very little action, Chinese airlines are rapidly making major inroads into inflight WiFi.

This has not led to full connectivity, but there are important steps being taken in a trend towards wireless inflight entertainment (IFE):

Chinese airlines had been touting WiFi since the middle of the past decade. But, except for China Eastern introducing a fully connected widebody fleet, other Chinese airlines have either been locked in the “trial” phase or only operated a minor subfleet with internet connectivity or wireless IFC.

The leading region for w-IFE remains North America, with some 60% of the fleet covered – close to a 5ppt increase from the end of 2020, according to the CAPA Aircraft Interiors Database.

Latin America’s airlines come a distant second and Europe, perhaps surprisingly, lags well behind with on 12.5% of its fleet connected in this way. Asia, led by China, is however growing at a faster rate.

Chinese airlines, notably, have some of the highest levels of usage of dropdown screens, even seatback screens, on narrowbody aircraft.

It appears that the push for personalised entertainment and dual screen experience is taking hold in China’s highly competitive marketplace as airlines struggle to differentiate in a much more competitive and experience-oriented landscape.

However, the inroads in w-IFE seem to indicate that Chinese airlines are, in the near term, not interested in connected narrowbodies or are awaiting a cheaper and more reliable solution (such as perhaps ATG 5G).

Globally, some of the major IFC developments include Delta officially embracing a dual-vendor solution with Viasat, in addition to Gogo, and KLM officially starting to offer IFC on narrowbodies, also with Viasat.

KLM's partner Air France also decided to double down on the multi-vendor approach, tapping Gogo for its upcoming A220s.

Key Fact #4: Wireless IFE vendors get creative to make inroads during the pandemic

Accelerated announcements are being made in the wireless IFE space, such as from Inflight Dublin and LiFE in the Air, on wireless IFE trials.

Providing trials allows vendors to hook cash-drained airlines so that once demand returns, airlines will immediately sign up to these innovative offerings.

There have been recent cabin revelations from LCCs such as Tigerair Taiwan and Blue Air, marking a general trend that LCCs see the competitive advantages of offering more than ‘just a seat’.

More LCCs now offer in-seat power, often in the form of USB-A ports, and/or device holders, to allow passengers to view content more comfortably on their own devices.

For obvious reasons there have been few major announcements from airlines on seating and configurations. Many new deliveries have been delayed, leading to the postponed introduction of new products.

But, as airlines look to reorganise fleets to position competitively for the post-pandemic environment, new moves are under way. Retrofits have recently resumed. These can take years to plan and involve millions of dollars of investments, although emergence from pandemic conditions will accelerate the process.

There are also many unknowns regarding the pace and scale of the return of the crucial business travel market. In short, many airlines are unlikely to have the cash flow to respond to new COVID market conditions in major seat/cabin reconfigurations.

But there are trends emerging – some that have been years in the making:

Something of a half-way house, but one which gives an indication of the way some airlines are anticipating the profile of the post-2021 marketplace is the potential expansion of two types of economy class seating.

Both developments signal that airlines are aiming for differentiation and flexibility as they continue navigating uncertainties in the post-pandemic market.

Some recent developments in seats offer a glimpse into the potential nature of a post-pandemic airline marketplace.

Delta recently revealed plans to install only Premium Economy on its A330ceos and 767-300ERs, while leaving business class untouched.

Delta appears to be taking a risk-averse approach. As the future of business travel remains uncertain, it is clear that there will be a clear need for a premium leisure market and a low cost corporate travel market.

Premium Economy can potentially offer the perfect middle market solution for this.

Emirates is also doubling down on Premium Economy, announcing plans to install the seat type on its existing A380s, in addition to just the factory-new ones. Swiss, meanwhile, has announced that it will proceed with installing Premium Economy as planned.

Lufthansa also announced earlier in 2021 that it is considering decreasing the number of business class seats to make room for Premium Economy; Japan Airlines made a similar announcement for its A350-1000.

While many airlines airlines are taking a wait-and-see approach for products at both ends of the aircraft, it now seems very clear that the trend towards investment in the “middle”.

Some 30% of the world’s fleet now has some form of premium economy offer – and this percentage is only set to rise through the pandemic recovery phase.

However if there is a sudden lift in demand, issues like potentially disrupted supply chains and skilled employee shortages may mean delivery delays. New suppliers emerging - and market share changes - can be anticipated.

Four companies dominate the premium economy market, including Collins, Safran, Recaro, and ZIM, should be beneficiaries of this development. 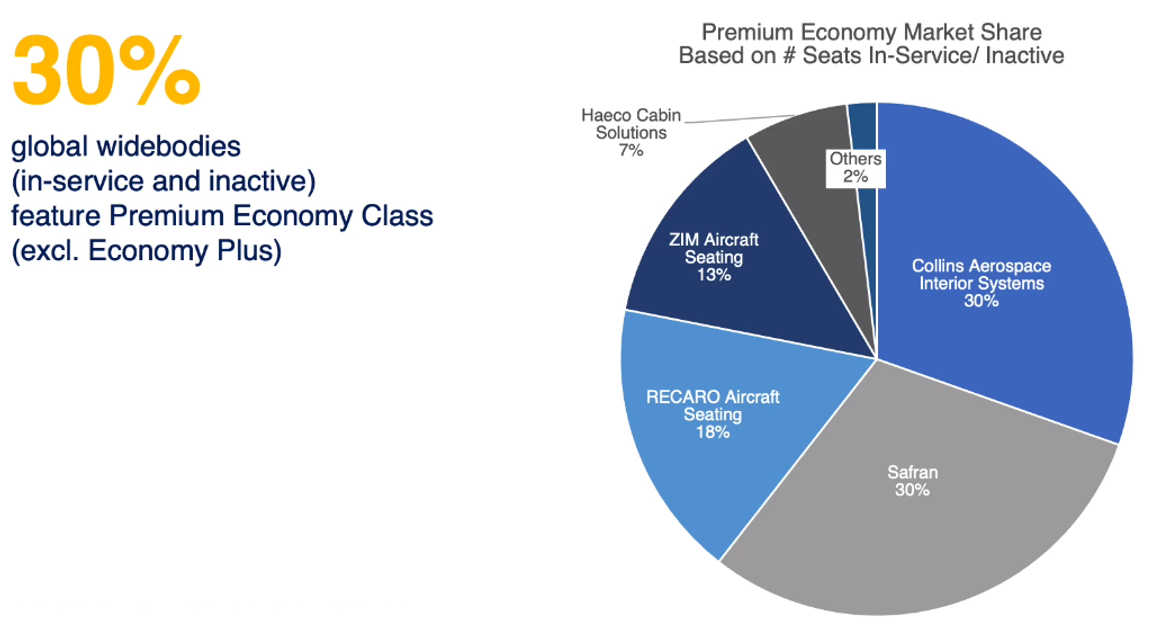 There are still many unknowns, but the unique CAPA Aircraft Interiors Database removes the complexity

As the industry continues navigating new developments and aims to figure out a clear strategy, CAPA will continue to offer unparalleled insights to minimise unknowns and help the industry craft data-backed strategies.

If you’re interested in understanding more about CAPA’s database of more than 4.5 million seats, 43,000 commercial aircraft, 600 airlines, and more than 50 seats, IFE, and IFC OEMs, please log your interest here.