AerCap, Babcock & Brown Air and Aircastle all posted sharp stock market gains yesterday, as market confidence in aircraft lessors continues to send their share prices upwards. Most lessors are reporting full order books and continued interest in sale and lease backs and other financing arrangements, as airlines continue to look for ways to reduce the capital costs for their fleets due to continues financing difficulties.

AerCap gained 6.1% yesterday, after a 7.5% spike on Tuesday. The lessor reported earlier in the week that agreements signed in 2Q2009 have essentially filled its order book and it expects 2010 to “show signs of significant market recovery”. The stock has gained more than 75% over the past three months, reaching a peak of EUR7.50 per share in late June.

Babcock & Brown Air rose 7.0%, after declaring a quarterly cash dividend of USD0.20 per common share for 2Q2009. The dividend is in-line with previous quarters, although is down from the 0.50 per share dividends paid in 2007 and the first two quarters of 2008. Since the end of March, the company’s share price has gained close to 70%.

Aircastle was up 7.3% while Genesis Lease gained 5.2%. The exception to the strong upwards trend was private and business aircraft lessor, Air Partner. The lessor is expected to face continued weakness in its markets, with conditions deteriorating through most of the year. The company remains cautiously optimistic about the future of its markets, but is pursuing a diversification strategy to insulate it from the demand drop in particular market segments.

Embraer traded the most strongly of the major aircraft manufacturers, up 5.7% yesterday, The company continues to report only modest ordering but was helped by a 3.1% surge on Brazil’s Bovespa index, related to better inflation and manufacturing data from the US.

The company also confirmed it is considering a new aircraft design, slightly larger than its current E-195, and is talking to engine manufacturers regarding requirements and new technologies. The company’s main competitor, Bombardier, launched its 110-140 seat C-series last year, and expects the new aircraft, featuring Pratt & Whitney’s geared turbofan, to enter commercial service in 2013. Mitsubishi also has a new regional jet under development, while Sukhoi launched its new regional jet last year. 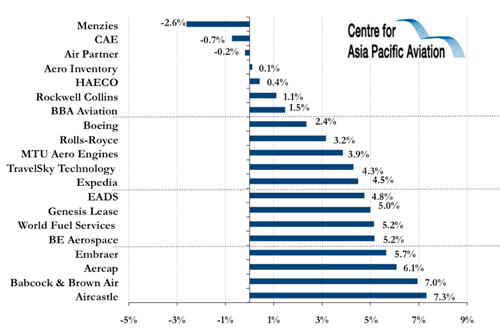