While airlines in Europe and North America are agitating against Export Credit Agency (ECA) financing for their Asian and Middle Eastern rivals, international aircraft leasing firms have been quietly tapping traditional and new sources of funding. Much to the chagrin of airlines, this includes new methods of funding backed by ECAs.

ILFC announced in early Oct-2010 that it has repaid a USD2 billion bank loan. The loan was issued as a revolving line of credit in Oct-2005 and fully drawn in Sep-2008, when the leasing company was facing major financing uncertainty. The collapse of parent, AIG, and the collapse of its credit rating, shut off ILFC’s easy access to cheap debt, forcing it to strike out on its own.

ILFC - and other lessors large and small - are viewing much more favourable debt and capital markets than they did just 12 months ago. Since Sep-2008, ILFC has been able to increase its liquidity position by more than USD12.5 billion, through the issuance of debt, extension of debt and sales of aircraft. ILFC has raised USD4.4 billion in debt this year, although the unit’s funding problems are not yet completely solved and debt repayments and asset related impairments have taken a toll on the company’s bottom line. ILFC will however be “self-financing going forward” according to ILFC Chairman, Douglas Steenland, with AIG support promised through to Feb-2011.

Financing is still there for the smaller companies as well. Air Lease Corp (ALC), a new aircraft leasing company being launched by Steven Udvar-Házy, the founder and ex-Chairman of ILFC, and John L Plueger, a former ILFC executive, managed to secured initial financing of USD3.3 billion before its Jul-2010 launch. Aviation Capital Group has closed more than USD850 million through private debt placements this year.

ECA funding is one avenue for lessors

Even with bank lending easier than before, leasing companies are increasingly looking at different sources of financing, including asset sales, secured and unsecured debt markets and ECA financing. Mr Steenland commented in early Oct-2010 that aircraft lessors “are going to need to be in a position where they will be able to tap all of the levers of financing available to them”. ECA financing is taking on increasing importance for aircraft lessors, with a number of deals going through recently.

In mid-2009, Aviation Capital Group (ACG) announced plans to use a new financing structure in conjunction with the Export-Import Bank of the US (Ex-Im) for aircraft financing. AerCap has recently closed two Airbus aircraft financing transactions with the European Export Credit Agencies, led by the Export Credits Guarantee Department - the UK ECA. These come on top of a USD1.4 billion facility agreement, under which the European ECAs may provide guarantees until 2012.

As financing concerns ease, lessors are getting back into the business of ordering aircraft in large numbers. Leasing companies have ordered 216 aircraft from Airbus and Boeing this year, or just under one third of total orders for the year to date. More large orders could be coming as air travel returns to pre-recession levels.

ILFC is looking at beefing up its narrowbody orders, although it may wait until Airbus and Boeing decide on the future direction of their narrowbody programmes. GECAS is considering more widebody purchases, although narrowbody orders are expected to account for nearly two-thirds of leasing company orders. 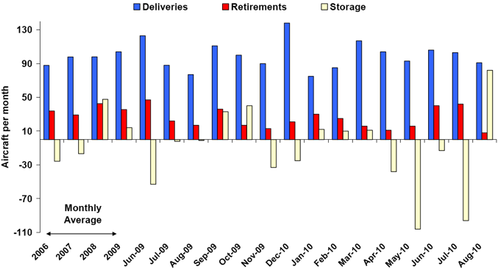 According to a report from Frost and Sullivan, aircraft lessors now account for 31.5% of the global commercial aircraft fleet, but this will increase, particularly in markets such as Asia and Latin America. At the end of 2009, lessors held 6,180 aircraft in their fleets. This is expected to increase to close to 8,650 by 2015, a growth rate of 5.8%.

Start-up, low cost carriers and airlines in growth regions such as the Asia Pacific region are increasingly favouring aircraft leases over outright purchases. The CAAC recently stated that 60% of the 3,000 aircraft expected to be operated in China by 2025 could be leased.

Aircraft lessors are in a stronger position than most to benefit from the upturn in airline markets over the next few years. ALC CEO, Steven Udvar-Házy, believes that leasing companies will control 45% of the global commercial aircraft market by 2020.

With large order backlogs continued profitability and a rapidly changing marketplace, the structural shift towards aircraft leasing will only continue to accelerate.