Willis Aerospace, reporting on insurance premium renewals for the October month – the beginning of the annual renewal cycle – has reported a substantial increase in premiums for the month, after the most costly year ever for insurers. But even though the headline premium increase is very high, Willis says fleet values have inflated this, with the actual increase around 17%.

The following is quoted from Willis’ monthly Airline Insurance Insight: “Many in the market believe October marks the start of a new renewal cycle. With losses in 2009 being at their highest in history (excluding September 11, 2009 losses) and lack of investment income available to insurers, it was expected that the level of premium increase would see a rise on the 17% increase seen during the first nine months of the year.

Rating and premium levels have continued to increase for risks renewing in October, with the headline premium increase currently standing at 30%. However this figure is distorted by the fact that the Average Fleet Value (AFV) has increased by 21% and passenger numbers by 4%, primarily as a result of the Arik Air, Lion Air and Libyan African Holdings (the name of the new combined programme of Libyan Arab Airlines and Afriqiyah Airways) programmes renewing with substantial growth in exposures.

If these renewals are excluded, then the AFV increased by 12% and passenger numbers by 1% and the level of premium increase drops to 17%, the average for the preceding months of 2009.

Although insurers are still succeeding in forcing through large increases in premium when compared to the levels of 2008, the level of percentage increase in premium is not rising significantly. This is likely to set the benchmark from which insurers will base renewals negotiations later in the fourth quarter and renewals going forward into 2010.” 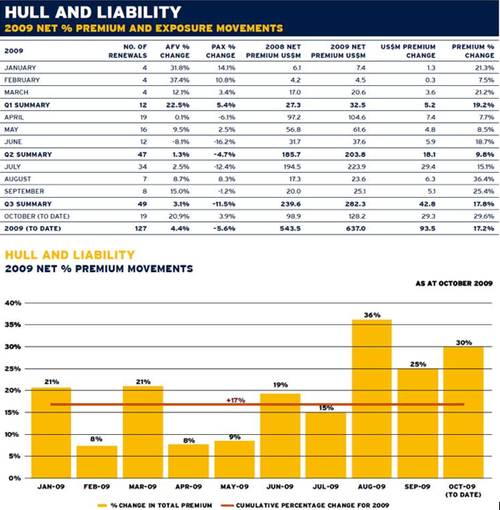 But, even though October is a pivotal month, Willis notes that the major airlines have still to step up, so that November will also be a strong indicator of the market:

“It will not be until later in November when some of the world’s largest programmes have renewed that we will see how the market will treat the large flag carrier programmes. These will include the Gulf Co-operation Council (GCC), Singapore Airlines and SFIT (SAS, Finnair, Icelandair and TAP), although Austrian Airlines will not renew as part of this programme following its purchase by Lufthansa earlier in 2009.”

Major US airline renewals to come in December; increases possible after early-2009 losses

Once the new renewal cycle is under way, Willis notes that “December is the busiest in terms of the number of renewals offering a varied selection of renewals, in terms of size, sector and geography.

There are 69 risks expected to renew during the month, including the majority of the ‘U.S. Major carriers’ within the 18 U.S. airlines scheduled to renew. There will be interest within the market to see what effect the losses sustained by U.S. carriers earlier in 2009 will have on these renewals.

In 2008, with U.S. insurers primarily only participating on U.S. domiciled programmes, they had seen a relatively low level of loss activity since 2001. This resulted in them giving smaller increases in rates and premium than the non U.S. markets required. There are 19 programmes that will renew with an expiring AFV in excess of US$5 billion.”

As ever the renewals during December will have a significant impact on the final figures for the year, in 2008 they generated in excess of US$800 million in premium.”

According to Willis, losses in 2009 to date amount to USD2,081 million, composed of USD625 million for hull losses, USD1,081 million for “liabilities” and a pro-rata figure of US$375 million for “attritional losses”. This, despite the airline industry achieving its safest years ever in terms of passenger fatalities.

The following graph shows the relative changes in loss levels over the past five years, with the 2009 figure rising above USD2 billion.

1 October: a Wind Jet Airbus A319-130, registration EI-ECX, sustained impact damage when it flew through a hailstorm whilst on a flight from Palermo to Cantania, Italy. The aircraft landed safely with no further incidents.

2 October: a Boeing B737-400 of Malaysian Airlines, registration 9M-MMR, sustained damage when the aircrafts left main undercarriage collapsed whilst parked at Kuching Airport, Malaysia. The aircraft had recently arrived from Kuala Lumpur and was being prepared for its returned flight. There were no reported injuries.

7 October: a Boliviana de Aviacion (BoA) Boeing B737-300, registration CP-2551, sustained damage when it flew through a hailstorm whilst on a domestic flight from Sucre to Cochabamba, Bolivia. The aircraft landed safely with no further incidents. There were no reported injuries.

20 October: A Boeing MD-11 of Centurion Air Cargo sustained substantial damage to its right main undercarriage when the aircraft made a hard landing in Montevideo, Uruguay. The aircraft was operating a flight from Miami, USA. There were no reported injuries.

An uneasy feeling under the surface…

From an industry perspective the current relatively low number of passenger casualties is clearly a major positive, but under the surface there is a challenging equation for insurers.