Airbus and Boeing, which still have the ongoing determinations from the World Trade Organization hanging over them, will reportedly oppose Bombardier's use of export-financing arrangements for its new CSeries regional jet, according to a report in the Wall Street Journal.

The new aircraft will transport up to 150 passengers, bringing Bombardier into direct competition with the larger manufacturers' narrowbodies. Bombardier’s financing agreement for the aircraft with the Canadian Government will take advantage of terms only permitted for smaller regional jets, which Airbus and Boeing oppose, as they are unable to access similar terms.

The opposition will be addressed at a 01-Feb-2010 OECD meeting of representatives from the EU, US, Brazil, Japan, Russia and China. They will discuss the Aircraft Sector Understanding (developed in 2007 to cover aircraft financing) and address rules concerning the use of export-financing.

Bombardier and the Canadian Government maintain that the financing terms used are within regulations. However, Airbus and Boeing feel that using the relaxed rules would distort competition, as the regional jet and narrowbody markets had not previously overlapped.

Competition for Airbus and Boeing in the narrowbody segment will continue to tighten over the next decade and a half, with new aircraft entering the segment and A320 and B737 replacements not due until after 2020. Both manufacturers are under pressure to offer updated versions of their aircraft, featuring new technology engines.

There are several new aircraft families in development (requiring billions in financing and support over the next few years) which seek to challenge the comfortable narrowbody duopoly. Apart from Bombardier’s CSeries, there is also the MC-21 under development by Russia’s UAC and the C919 currently being developed by COMAC in China.

There is also a possible stretched version of Mitsubishi’s MRJ regional jet with more than 100 seats. Bombardier is also stretching its CRJ family to 100 seats, although the CRJ-1000 test flight programme stalled in late 2009, due to software problems. Embraer is also reportedly looking at a new, larger aircraft, and already has its E-195 which seats up to 120 passengers.

In Friday trading, most major aircraft manufacturers were down amid weaker equity markets globally. EADS, parent of Airbus, was 2.2% lower at the close of trading, while Embraer and Boeing were down 2.2% and 2.4%, respectively. MTU Aero Engines fell 5.8%. 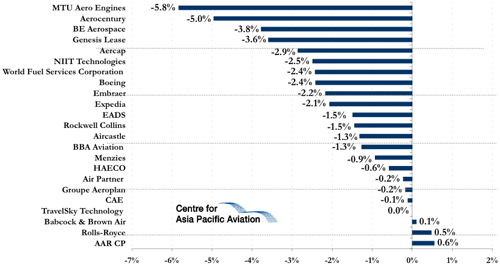