Airbus records its 1,000th delivery as the A330 goes from Cinderella to princess

Airbus delivered its 1,000th A330 on 18-Jul-2013, with the special liveried aircraft going to Cathay Pacific Airways. This is the first time that Airbus has surpassed the 1,000 aircraft milestone for a widebody programme and was cause for some celebration at the company. Its main competitor Boeing has already reached the same milestone for the 767, 747 and 777 and in all likelihood the 787 will pass the 1,000 deliveries mark by the middle of next decade.

After two decades of service, the A330’s popularity shows little sign of diminishing, even in the face of new widebody programmes such as the A350 and Boeing 787. In Apr-2013, A330 programme head Patrick Piedrafita said more than 800 sales have been logged since Boeing launched the 787 “validating the A330’s sustained competitiveness.” 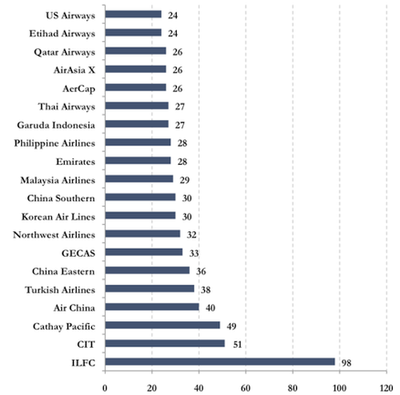 Between 2008 and 2012, the A330 outsold the 787 by a factor of nearly two-to-one, and sales of the aircraft are nearly even over the last decade. The growth in global long-haul travel from the developing world, particularly Asia-Pacific, Middle East and sections of Europe, and the related expansion in the global appetite for widebody aircraft, has ensured that the A330 remains in demand. 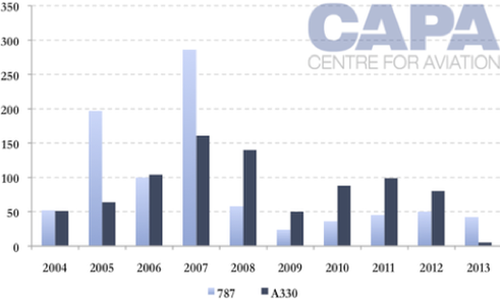 Airbus markets the A330 as ‘the right aircraft, right now’. The aircraft is optimised for mid to long-range missions up to 6,000-7,000nm which, Airbus maintains, offers it an advantage over very long-range aircraft such as the 777 and even the 787 and A350 XWB, which are optimised for flight profiles of 8,000-8,500nm, or even further. Airbus has continually introduced incremental improvements in the aircraft, reducing fuel burn, updating interiors and avionics and extending the operating range, as part of a bid to ensure that the aircraft remains in production beyond 2020.

When the 787 was formally offered to customers in 2004, its extraordinarily rapid acceptance was seen as a major threat to the A330's continuing sales. With similar passenger capacity, longer range and a promised 20% improvement in economics, the composite aircraft reached an impressive 900 orders in just four years. However, the A330's status as proven platform and its combination of availability and reliability have seen it hold sway in the face of the next generation of aircraft.

With more than three years of delays in getting the 787 to customers and Airbus being forced back to the drawing board with its initial A350 concept, the A330 has been the prime option for airlines seeking widebody aircraft of around 250 seats.

Boeing’s highly visible 787 teething issues – including engine problems, a 100-day grounding due to lithium-ion battery fires and the recent onboard fire traced to an emergency locator transmitter – have served to enhance the attractiveness of the A330 as a known quantity.

Airlines, frustrated at being unable to get their hands on Boeing’s latest jet, turned to the older aircraft to tide them over until the next generation of widebody aircraft enters service. In 2007, the same year as the first 787 delay announcement, A330 sales reached more than 150 aircraft, while orders of Boeing’s venerable 767 hit a six-year high.

With resurgent demand, Airbus slowly but surely increased A330 output. Over the past nine years production rates have doubled, reaching a record high of 10 aircraft per month in Apr-2013. Given Airbus’ work schedule, this level of output translates to around 110 aircraft per year. In the first half of 2013, Airbus delivered 54 A330s, a figure it should better in the second half of the year by two to three aircraft.

According to chief operating officer John Leahy, Airbus plans to maintain production at this rate until at least 2015, even though the aircraft’s order backlog only stands at 280 aircraft. Mr Leahy is confident the A330 will stay in production past 2020.

2013 has however been a slow year for A330 orders, with just eight firm orders. Airbus has half a dozen sales campaigns for the aircraft underway and is also patiently waiting on some A330 orders from China to be unfrozen. An order for 45 A330s for Chinese state-owned airlines was held hostage over China’s opposition to Europe’s unilateral decision to expand its emissions trading scheme beyond Europe. With the temporary resolution of the dispute in late 2012, 18 of the orders have now gone through, but the remaining 27 orders remain in limbo, pending international progress on an airlines emission scheme.

To keep the orders flowing as increasing numbers of the similarly sized 787s enter service, Airbus is looking at ways it can enhance the aircraft further to increase its attractiveness to customers. The manufacturer is investing more than EUR150 million per annum in a continuous development programme to ensure that it stays up to date and continues to improve its performance.

Over the past decade Airbus has invested one euro in improvements for every euro originally spent developing the aircraft. In 2010, it launched a dedicated freighter version, the A330-200F, but sales have been slow, largely due to the global economic slowdown which has had a proportionally greater impact on freight traffic. Airbus has sold only 45 of the new version.

Towards the end of the year, Airbus then announced yet more enhancements will come for the aircraft by mid-2015. This includes raising the take-off weight to 242 tonnes, increasing maximum range by 350nm for the A330-200 and 500nm for the A330-300, opening up some key markets such as Europe to the US west coast. With these upgrades, Airbus will have added almost 50% range to the A330-300 since it entered service.

To keep the aircraft attractive as increasing numbers of 787s enter operations, Airbus is now considering a ‘regional’ version of the aircraft, aimed at high density markets with short flight profiles, such as in Southeast Asia and on domestic routes in China. At this year’s Paris Air Show, Mr Leahy confirmed that the company will offer a ‘regional’ version of the A350-900, structurally unmodified but featuring lower thrust engines to make it better suited for shorter routes, in order to match the payload-range capability of Boeing’s double-stretch 787-10, which was also announced at the Paris Air Show.

A regional A330 would follow a similar concept, with a reduced take-off weight, lower thrust engines and possibly higher density passenger cabin configurations, in order to reduce acquisition and engine/airframe MRO costs. The average mission distance of the A330-300 is just 1,800nm. According to Mr Leahy, the regional A330 may be offered to customers by the end of 2013.

Of the 1,000 A330s already delivered, 988 are still in service, testament to the commercial suitability and longevity of the design, as well as to the rapidly increasing output in recent years. Just under 50% of A330s delivered have been produced in the last five and a half years.

A330 deliveries by year 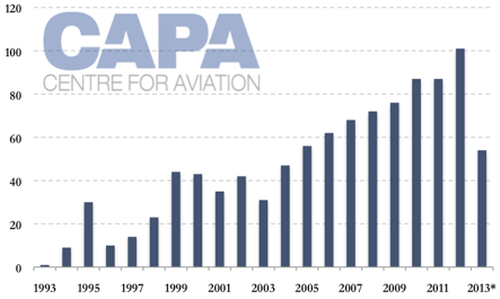 Nearly 45% of all A330s produced are in service in the Asia-Pacific region, notably in China, Southeast Asia and Australia; five of the 10 largest A330 operators are based in Asia Pacific.

In addition to the large numbers of A330s already serving the region, around half of the A330 order backlog is with customers in Asia Pacific.

Asia’s fast developing carriers have favoured the A330 for its ability to serve both high density intra-regional routes and long-haul intercontinental flights. With the progressive range improvements introduced by Airbus, the high capacity A330-300 will now serve most European capitals from Southeast Asia. The longer ranged but lower capacity A330-200 is able to operate to all of Europe, as well as trans-Pacific routes from almost any point in Asia-Pacific.

Cathay Pacific has been a prolific customer and user of the type, with 37 in service in its mainline fleet and another 18 in operation with its wholly-owned subsidiary Dragonair. The A330 is particularly popular on the island, with Hong Kong Airlines also owning a fleet of 17 and leasing three out to its parent Hainan Airlines.

Mainland China is also fertile ground for the A330. Air China is the single largest operator of the type, with 37 at its mainline operation and four operating with its regional branches. The carrier also has another 12 A330s on order, which it will use to phase out a combination of older generation A340s and its 757-200s. China Eastern Airlines is also a major user, with 31 in service and another six on order. In North Asia, Korean Airlines too is a leading user, with 23 in service and another eight on order.

In Australia, the Qantas Group has 30 A330s in operation, 20 with its mainline Qantas brand, serving a mix of domestic and long-haul routes, as well as 10 with its Jetstar brand, which has helped pioneer the low-cost, long-haul model in the region. Another LCC pioneer, AirAsia X, has also favoured the aircraft, with a dozen in service and another 14 on order.

Southeast Asian state-owned airlines have also favoured the aircraft. Singapore Airlines and Malaysian Airlines both have 22 in service, while Thai Airways International operates 27.

The ‘Big Three’ sixth freedom carriers of the Middle East – Emirates, Etihad Airways and Qatar Airways – have also taken a liking to the A330. Between them they operate 83 A330s, more than 70% of the regional A330 fleet. However, their days with the aircraft are numbered, as they have shown a clear preference for new aircraft such as the A350 and 787. The three airlines have ordered 177 of the new twin jets, but have just three A330s left in their order backlogs.

Outside Europe, Asia-Pacific and the Middle East’s long-haul carriers Airbus has had much less success. In North America, Delta Air Lines is the largest user, but only after inheriting 32 A330s in its merger with Northwest Airlines.

As in the Middle East, North American use of the aircraft has been concentrated in the hands of a few major operators: between them Delta, US Airways (18 aircraft), Hawaiian Airlines (13 aircraft and another nine on order) and Air Canada (eight aircraft) account for 80% of all those flying in the region.

However, another type of North American customer has been very good for the A330: leasing companies. ILFC is Airbus’ single largest customer for the type, having ordered 98 aircraft and placed all of them with customers. CIT Leasing has ordered 51 and GECAS has ordered 33. Leasing companies have favoured the aircraft not only for its utility and demand, but also for its low risk and large installed user base.

The A330's lease rates and second hand rates have also held up well compared to older widebodies such as the A340 and Boeing 747-400. Ireland’s AerCap has ordered 26 A330s, while Intrepid Aviation’s entire fleet and order book of 20 aircraft consists of nothing but A330s.

Like the Middle East carriers though, leasing companies are now focusing on the next generation of widebodies. Lessor orders for the A330 have almost dried up, with the last order by a major leasing company being placed in Jul-2012. CIT Leasing is still to take delivery of 25 A330s, while Intrepid Aviation has another 18 on order.

Airbus is optimistic that repeat customers and new orders will allow it to keep the A330 in production well into the next decade. The flood of orders in the middle of last decade is unlikely to be repeated, but with sales campaigns ongoing and global demand for widebody aircraft unabated, A330 sales will continue to trickle in.

While some major carriers and lessors have shifted their attention to more modern aircraft, existing A330 operators, smaller airlines and leasing companies will still have a place for the aircraft, thanks to its combination of pricing, availability, reliability and efficiency.

Africa and Latin America are virtually untouched markets and there is still room for demand in Asia. The A330 won’t be setting long term sales records, but Airbus should be comfortably able to sustain output at 10 aircraft per month for years to come.