Airbus has gained a foothold in a key market with its key aircraft. In Japan, where Boeing has long enjoyed a near-monopoly, Skymark Airlines yesterday announced a "basic agreement" with Airbus for four A380s with options for two more. The LCC stated it plans to firm up contract in the "spring of next year".

Jazeera Airways was the biggest LCC gainer yesterday and also posted the largest gain on the Kuwait Stock Exchange, soaring 9.6% on the back of strong Q3 results. The stock closed at KWD114 yesterday, its highest level since late Aug-2010.

Jazeera achieved a near sixfold increase in Q3 net profit yesterday, posting KWD4.4 million (USD16 million) in net profit. The LCC stated the quarter was its best-performing since launching in 2005. The results far exceeded analyst expectations, who were predicating losses.

Chairman, Marwan Boodai stated the Q3 results "are the direct outcome of the initiatives we've put in place since the beginning of the year, starting with the 100% acquisition of Sahaab Aircraft Leasing in Feb-2010 and the introduction of the turnaround plan in May".

In Oslo, Norwegian shrugged off losses in wider European markets to gain 8.6% yesterday. The stock is trading at three-month highs. Investors continued to respond well to Norwegian’s strong Oct-2010 traffic results and news the LCC will lease two B787-8s from ILFC for long-haul services in 2012. The stock gained 8.6% yesterday.

Also in Europe, Air Berlin shares were up 0.8% yesterday after the airline stated it carried 3.5 million passengers in Aug-2010. The figure is a 7.6% year-on-year increase.

Cebu Pacific handled 20% more passengers in the first nine months of the year, according to a statement by the company. The airline will add services to Hong Kong, Singapore, Kuala Lumpur, Ho Chi Minh, Jakarta and Brunei next month, and to Bangkok and Seoul early next year. Despite the positive news, the stock couldn’t avoid losses in wider Filipino markets, falling 3.9% to PHP117.

Among other losers, Air Arabia closed down 2% in Dubai. CEO, Adel Ali, yesterday remained bullish on the LCC’s Q3 performance, assuring investors that the quarterly profit will be “better than expected” and will “beat analyst expectations”. 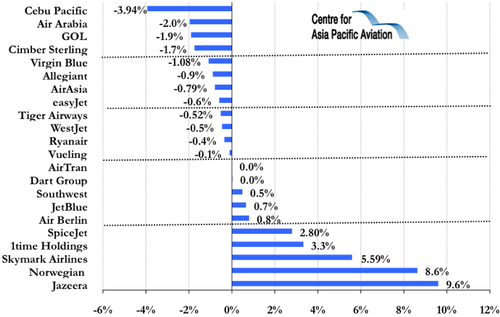