Shares in EADS wobbled yesterday, falling 3.6%, as the fall out from the crash of AF 447 continues. Meanwhile, other aviation suppliers have reported generally negative trading, as markets in Europe and North America slipped around 1-1.5%. Oil dropped just below USD70 per barrel, trading down by 2.3%.

Boeing was down 0.4%, while Embraer fell 2.5% - continuing their negative performance in June.

Air Partner, which specialises in private aircraft charter and leasing, was down 5.8% yesterday, after Charles Stanley Securities stated it expects a 70% decline in the company’s 2009 operating profit. The Private Jets unit is expected to be most strongly affected, with revenue forecast to decline 35% in 2009 and 10% in 2010.

The negative forecast by Charles Stanley comes after Air Partner announced in early June that profits for the year ending Jul-2009 would be below expectations, due to weak demand. Air Partners’ revenue for the first six months of FY2008/2009 was down 2% year-on-year, while EBIT declined 17%. 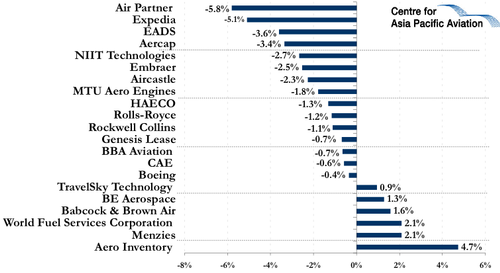