Aviation suppliers' share prices were up strongly on Monday, with Boeing, Airbus and Embraer all reporting gains. European, US and Asian markets all had strong positive trading, as investors bet on an economic recovery.

Shares in Airbus parent EADS rose 2.4% yesterday, while Embraer was up 4.3%, both continuing the gains seen late last week. Boeing and Rockwell Collins both surged, up 6.0% and 6.4%, respectively, as analysts forecast a short-term rise in defence stocks and companies with a smaller long-term defence spending exposure. Both companies fit the bit, with strong revenues from commercial sources.

Expedia was up 0.4%, after strong gains over the past few days of trading. The online travel agency’s competitors, including Travelocity, Orbitz Worldwide and CheapTickets.com, have followed Expedia's lead by permanently eliminating most fees on airfare bookings. Expedia announced its decision to make promotional fee waivers permanent midway through last week.

Ground handling company Menzies was one of the few suppliers tracked by The Centre not to share in the gains. The company is in the midst of a major cost cutting scheme for its aviation unit, although its newspaper distribution unit will have received a major boost with the announcement that Dawson Holdings, a major competitor, will withdraw from the newspaper and magazine distribution business. 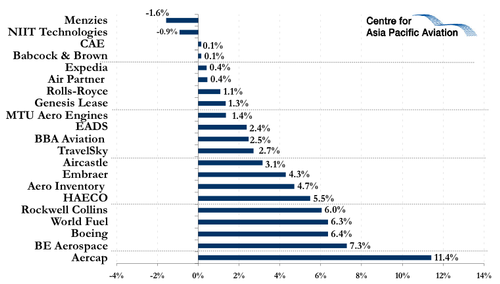