AirAsia X has denied media reports that a final agreement has been struck with Paris Orly Airport to commence long-haul low-cost services to the French capital in 2011, noting that talks are ongoing. AirAsia X operates eight widebody Airbus aircraft, rising to 11 in Dec-2010 with the delivery of additional high-capacity A330s.

AirAsia Bhd is expected to surpass the 100 million passenger milestone this week, after operating for more than eight years. It expects to pass the 200 million barrier within three to five more years. AirAsia’s shares fell 1.8% on Monday. Nok Air is planning to expand its operations to/from/within Thailand, which may affect AirAsia’s Thai venture.

Elsewhere, Virgin Blue gained 1.2% yesterday as it announced it would return to its primary IT system on Wednesday, having solved the issues that emerged last weekend. 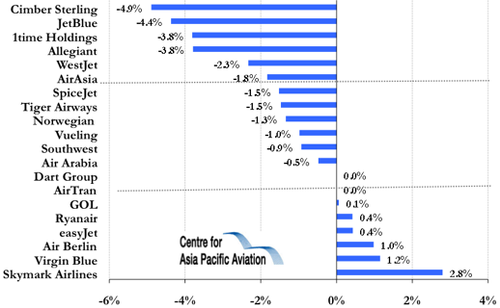