AirAsia X will inaugurate three times weekly Kuala Lumpur-Tokyo Haneda service “after October 2010”, using midnight slots, with fares from JPY14,000 (USD153) per sector, according to reports in the Yomiuri Shimbun.

Further details were not disclosed, including how AirAsia X (which has been in negotiations with Ibaraki Airport north of Tokyo) is responding to the high landing charges at Haneda, which are JPY2,400 (USD26) per ton.

AirAsia X launched sales for its Kuala Lumpur-Delhi service on 03-Jun-2010 and offered 1,000 free seats on the route online on 05-Jun-2010, for travel between 04-Aug-2010 to 31-Aug-2010. The carrier plans to launch the daily service on 04-Aug-2010. AirAsia X has earmarked USD5 million for advertising its services in India having also launched services to Mumbai in May-2010. The carrier has also confirmed plans recently to increase frequency on Kuala Lumpur-Melbourne (Australia) service from daily to twice daily, effective 01-Jul-2010. See more information at CAPA’s AirAsia X profile. 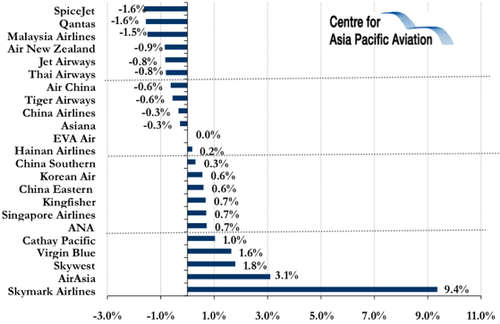