AirAsia Philippines to launch in 3Q2011, subject to approvals

AirAsia has announced its fully owned subsidiary, AirAsia International Ltd, has entered into a partnership agreement to establish a low-cost airline JV in the Philippines.

AirAsia will hold 40% equity in the venture, AirAsia Inc, through AirAsia International Ltd, while the remaining 60% will be held in equal partnership by local investors Antonio Cojuangco Jr, Michael Romero and Marianne Hontiveros.

The company will “leverage on AirAsia’s strength to forge into markets in China, Korea and Japan from the Philippines and will enable it to tap into existing prime markets such as Singapore, Hong Kong and Taiwan”. AirAsia stated these sectors would enhance AirAsia’s ASEAN regional expansion by providing AirAsia with additional routes and destinations and linking the destinations with AirAsia’s route network.

The joint venture is expected to commence operations in 3Q2011, subject to obtaining the relevant approvals. As part of the agreement, AirAsia will provide technical, operational and commercial support on an arms length basis to AirAsia Inc to “ensure commercial, operational, branding and service level uniformity throughout AirAsia’s operations”.

According to a recent CAPA report, the domestic Philippines market is about to enter a new phase of growth in 2011, as Tiger Airways, through its partnership with SEAIR, and AirAsia also through a cross-order JV agreement, enter the market. Philippine LCC, Cebu Pacific, which is well entrenched in that market with a majority capacity share, meanwhile could be looking at AirAsia X’s long-haul model with interest, especially as Philippine Airlines continues to be plagued by labour unrest and financial concerns. With its enormous overseas migrant worker markets, the Philippines is potentially a very compelling low-cost long-haul opportunity, not to mention its extensive short-haul domestic and full service international markets. See related report: Philippine Airlines faces storm as Cebu Pacific grows, Tiger and AirAsia enter market

AirAsia’s Group CEO Tony Fernandes stated: “We are proud to extend AirAsia’s successful low-cost business model to the Philippines and make it affordable for the average Filipino to travel domestically and regionally.  The low cost airline will also offer greater access to affordable travel to the Philippines which will help the economic growth of the country as evident in other regions where AirAsia is currently serving.” 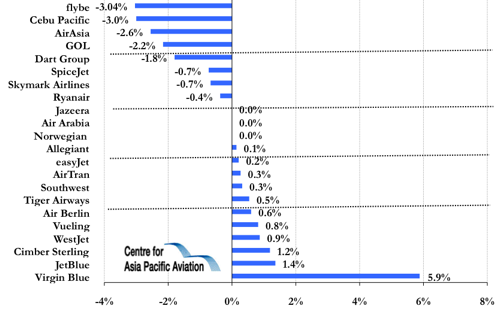