AirAsia posted an eightfold increase in 4Q2010 net profit to MYR316.6 million (USD103 million) as higher fares and ancillary revenues helped counter a 33% increase in fuel costs. AirAsia stated the outlook for 1Q2011 is positive despite turmoil in the Arab world which is impacting fuel prices. The AirAsia Group reported a combined EBITDAR of USD263 million in 4Q2010, a 135% year-on-year increase and for an industry-leading 49% EBITDAR margin. Revenue, profit after tax, load factors, RASK and average fares all set new records in the quarter. Profit after tax, meanwhile, exceeded the MYR1 billion market at at MRY1.07 billion (USD350 million) in 2010.

“The company is in the best position, financially, that it has ever been in providing a strong foundation for further expansion and growth in 2011,” CEO Tony Fernandes stated. 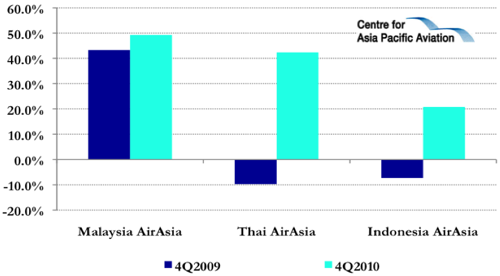 “I am confident we can hold our own," he continued. "With our plans to further expand our route network and key routes supported with the delivery of eight brand new Airbus A320 and the opening of three hubs in Kuching, Chiang Mai and Medan, we can position ourselves to emphasize on increasing load factor and yields. We’re well on track in both Bangkok and Jakarta towards the listing of our affiliates. It’s an exciting prospect, and the performance of the two affiliates in 2010 should whet the appetites of investors.”

The report noted that “based on the current forward booking trend, the underlying passenger demand in the first and second quarters for the Malaysian, Thai and Indonesian operations remains positive. Load factors achieved in January were ahead of the previous year for all three carriers, and there are continued improvements in yield compared to the previous year”. The carrier, which plans to issue dividends for the first time since listing in 2004, will make a decision on the matter in the next three weeks, Mr Fernandes stated.

During the period, revenues increased by a strong 33%, with ancillary revenues more than doubling to represent 18% of the total. Ancillary revenue per passenger increased 99% per passenger while unit revenue (RASK) increased 21%, with Mr Fernandes noting that "ancillary has been a tremendous revenue stream for us". He added: "There’s still a lot of potential in Ancillary and we’re constantly looking to increase the numbers". 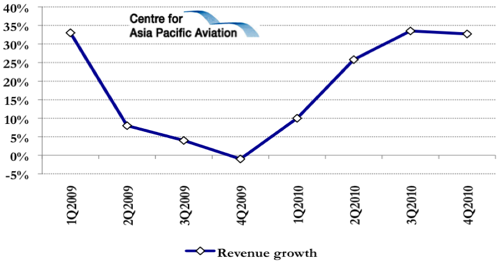 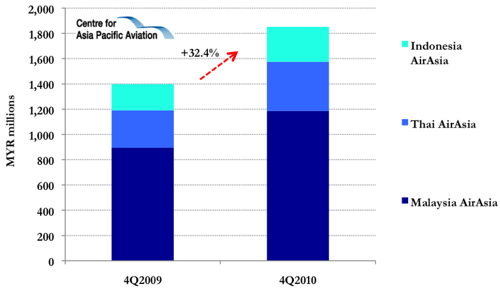 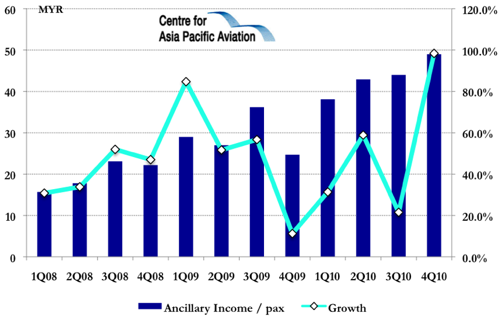 Unit cost (CASK) increased by 7% to USD 3.86 cents, placing AirAsia in the enviable position of having the lowest unit costs in the business. Mr Fernandes said the focus internally would be on containing – or even reducing – costs. “That’s the key. We’re already the world’s lowest-cost airline operator, and we intend to keep it that way,” he said 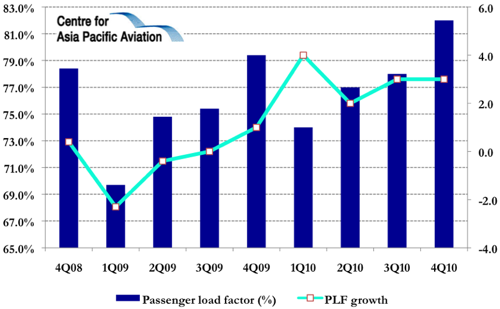 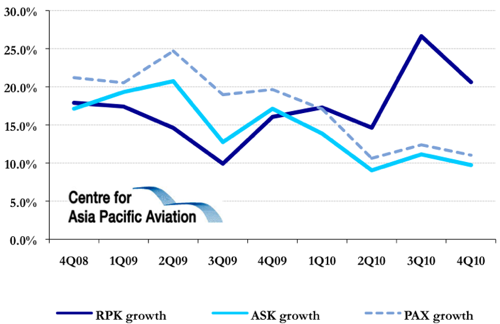 The carrier also stated it would “continue to monitor oil price movements, and the introduction of a fuel surcharge cannot be discounted if the current price is sustained or rises further”. Mr Fernandes recently stated the carrier would only consider imposing a surcharge if the price of crude in New York hit USD100 a barrel. Intra-day trading has surpassed the USD100 mark on 23-Feb-2011 for the first time since Oct-2008.

Impressed with performance of subsidiaries

Mr Fernandes stated he was impressed by the performances of the carrier's Thai (TAA) and Indonesian (IAA) operations, which reversed losses from the previous year. In 4Q2010, TAA’s net profit improved by 364%, as revenues increased 29% and ancillary revenue per passenger increased by 109%, with the carrier expected to deliver a strong 1Q2010 performance with high load factors. The first quarter is the peak season for tourist arrivals in Thailand.

The carrier's new Thai hub in Chiang Mai commenced operations in Jan-2011, with the new routes performing well. The second quarter is expected to be “significantly better” than 2Q2009, as a result of political stability and improved demand.

IAA’s profit increased 214% as revenues increased 38%, with ancillary revenues increasing 108% and RASK up 22%. The carrier expects the next two quarters to remain strong, with more international destinations planned from the Medan hub this quarter. Mr Fernandes added: "Abolition of the travel tax for Indonesians flying abroad, which took effect on Jan 1, 2011, has boosted international sectors. Additional frequencies are planned for the second quarter to cope with the demand".

IPO for Thai and Indonesian units; Philippines to start in 2H2011

AirAsia is planning to float the shares of TAA and IAA later this year even as it moves to expand its operations in the Philippines, where it expects to launch inaugural services in 2H2011. “We are well on track in both Bangkok and Jakarta towards the listing of our affiliates. It's an exciting prospect and the performance of the two affiliates should whet the appetites of investors,” Mr Fernandes stated.

Fleet of 53 aircraft at year-end

At the end of Dec-2010, AirAsia had 53 aircraft in its fleet, up from 48 in 2009. AirAsia will take delivery of three A320 aircraft in 1Q2011; one of the aircraft will operate in Thailand and two in Indonesia. The new aircraft would be used to replace B737 equipment and would provide additional capacity across the network. Six new routes are being planned across the network in 1Q2011 in conjunction with additional frequencies on existing routes.

The carrier’s cash balance increased to MYR1.5 billion with gearing was reduced to 1.75 times from 2.57 times a year ago. 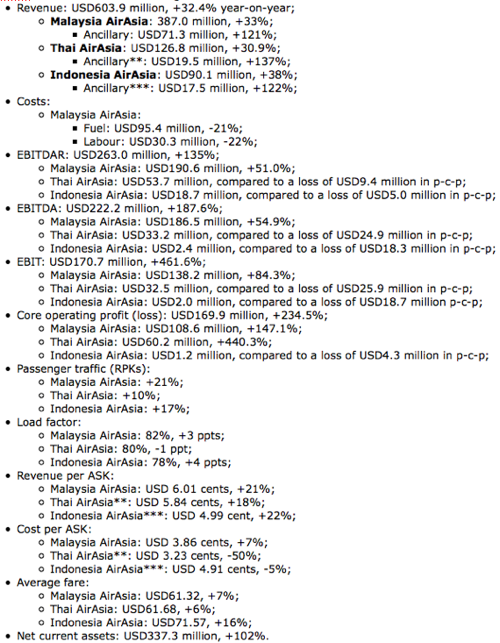