Air Canada is sticking to its strategy for its new low-cost carrier Rouge by introducing service in Jul-2013 to untapped long-haul leisure markets and operating flights to sun destinations - with a presumably lower cost structure.

The carrier is taking aim at both domestic rival WestJet and its vacations package business and large Canadian tour operator Transat. Now that Air Canada has unveiled the initial routes for Rouge, its competitors appear to be making schedule adjustments in response to the decision by Canada’s largest carrier to compete more aggressively in the leisure market.

Air Canada finally gained the green light to move forward with the establishment of Rouge after the government in 2012 stepped into contentious negotiations between pilots and management and ultimately allowed the carrier to impose a contract on pilots that included elements for the establishment of a low-cost carrier.

Now Air Canada is preparing to launch Rouge in Jul-2013 with two Boeing 767 widebodies and two Airbus A319 narrowbodies. The widebodies will be operated on new service from Toronto to Edinburgh, Scotland and Venice, Italy. 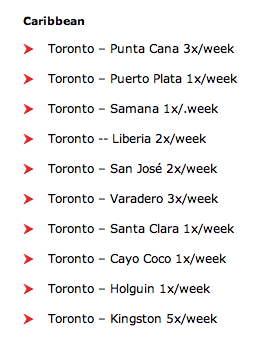 As expected Air Canada is intensifying competition with larger tour operator Transat (of which Air Transat is a subsidiary) on Rouge’s planned flights to Europe. While Air Canada faces no direct competition on the Toronto-Edinburgh route, Air Transat operates service from Toronto to Glasgow, which is 67km from Edinburgh. Factoring in Air Transat’s service to Glasgow, Air Canada and Air Transat will compete on all of Rouge’s European markets.

Schedules in Innovata show that during Jul-2013 at Rouge’s debut it will operate 639 weekly one-way seats to Edinburgh compared with 1,245 on Air Transat’s Toronto-Glasgow route. On service between Toronto and Venice, where the two carriers compete directly, Air Canada will offer 639 seats in the market compared with 342 from Air Transat.

It appears Air Transat is pulling back slightly in some of the markets where it will face direct competition with Rouge, as online route tracker Airline Route has reported that during Jul-2013 to Aug-2013 Air Transat will reduce its Toronto-Athens frequencies from twice weekly to once weekly compared with the same period the year prior. Weekly frequencies between Toronto and Glasgow are falling from five to six year-over-year. Air Transat also serves Venice from Montreal (508km from Toronto), and during the Jul-2013 to Aug-2013 period Air Transat is increasing frequencies on the route from once weekly to twice weekly year-over-year but operating the service with 249-seat Airbus A310 aircraft instead of the 342/343-seat Airbus A330-200/300 aircraft used on the route during the year prior. Air Canada has only disclosed the configuration of its Rouge 767s for the 2013 winter time period that will feature 282 seats in a three class configuration – 230 Rouge standard (economy) seats at 30in pitch, 28 Rouge Plus seats with extra legroom featuring 35in pitch and 24 Premium Rouge seats that offer a pitch of 37in.

During the summer high season for transatlantic travel, Air Transat opted to reduce its capacity by 4% year-over-year between May-2012 and Oct-2012, and at the end of fiscal 3Q2012 cited a slight uptick in pricing and improved load factors year-over-year. But Transat faces a different operating environment during 2013 when pricing traction will be more difficult to attain as Rouge enters three of Air Transat’s transatlantic leisure markets with promotional fares that will likely include deals on miles accumulation.

Air Canada seems relatively conservative with respect to the capacity it is introducing in the Rouge transatlantic markets, but with Europe’s economy still on shaky ground the bulk of the demand in those markets will need to originate in Canada, which could create pricing pressure for all the carriers serving those markets. Air Transat seems to be responding to Rouge by shaving some of its capacity, but it remains uncertain if those adjustments will be enough to dull Rouge’s effect on the market. Air Canada is revamping its vacation packages business to include the flight operations of Rouge with the goal of improving its fortunes on leisure routes and improving its fortunes on the ground packages it offers within its vacations business.

Air Canada and WestJet deploy revamped cabins in the Caribbean

The A319 narrowbodies being deployed by Rouge into Air Canada’s existing Caribbean markets from Toronto will be configured with 142 seats – 118 in economy with a 29in pitch and 24 in Rouge Plus featuring a 35in pitch. By the time Rogue debuts its narrowbodies in those markets that feature extra legroom WestJet will be operating its reconfigured 737s on those routes with four rows featuring a larger 36in pitch marketed as a premium economy offering.

Schedules in Innovata for the beginning of Jul-2013 show that Rouge will compete with WestJet in seven of the 10 markets it is taking over from Air Canada. That number will likely rise to eight after WestJet on 11-Feb-2013 transitions its seasonal Toronto-Liberia service to year-round. Both Air Canada and WestJet have their own vacation divisions in an attempt to contain customers attracted to packages offered by Transat and Canada’s other large tour operator Sunwing.

Air Transat and Sunwing will have largely backed away from most of the Latin American and Caribbean markets where Rouge plans to operate at the time of its debut in Jul-2013. Those two carriers typically serve the sun destinations during the northern hemisphere winter and deploy the capacity elsewhere once the high demand for warm destinations wanes. Service offered by Sunwing and Air Transat to Punta Cana, San Jose (only Air Transat), Puerto Plata and Santa Clara ends around the Apr-2013 to May-2013 time period. Innovata schedules show that Cubana also ends seasonal service from Toronto to Cayo Coco in the Apr/May time period.

While schedules are subject to change, it appears that neither Air Canada nor WestJet are pumping huge amounts of capacity into the Caribbean during the summer season. The highest volume routes in terms of seats on offer appears to be Kingston where Air Canada, Caribbean and WestJet will offer approximately 1,624 seats in the Jul-2013 timeframe. Punta Cana is the second largest market with 934 seats on offer. But WestJet has also stated its intent to add a single flight each week from Toronto to Kingston, Varadero and Puerto Plata.

The push is likely a means to fortify some of those markets as Rouge attempts to introduce a fresh product into the market place.

Source: CAPA - Centre for Aviation and Innovata
Note –Seats per week, one way
Note – Air Canada faces no competition on service to San Jose. WestJet's transition to year-round flights between Toronto and Liberia is not yet reflected in the system

Rouge has had a painful birth, but its proof will be in how it can change Air Canada's culture

Born out of a need to put an entity into the air which has fundamentally lower costs than its legacy parent, Rouge is also sure to become a litmus test for the carrier's staff's view of how management is handling Air Canada's future. Intransigence at the union level - albeit with some limited gestures towards recognising the effects of a changed world - has generally prevented Air Canada from making the sort of radical cost reductions that the airline needs. So Rouge, as a break-out from this stalemate, occupies a most important role.

The saving grace for Air Canada up until now has been its ability to generate higher yields in the domestic market as compared with its major competitor, WestJet. But as WestJet takes aim at regional markets with its new fleet and leverages its opportunities towards competing across the board for the premium markets, Air Canada cannot afford to rest on its laurels. Its yield advantage is under attack, making it exposed with a much higher cost base than its smaller competitor.

Air Canada’s theory that Rouge’s lower cost base will improve its performance in leisure markets will now be put to the test in just a few short months. While its strategy appears to be taking aim at travel package tour operators, the Air Canada planes painted in a Rouge livery will meet a familiar foe in the Caribbean as WestJet appears to be readying for the intensified competition.

Rouge could have a better chance of performing favourably in its transatlantic markets as its main competitor works to secure financial footing, but it is rare that these types of experiments produce positive results.

Rouge has much to prove to live up to the vibrancy of its name.