On two previous occasions CAPA has examined the prospects of Belgrade Airport, where the management, supported by the government, have aspired to turn it into a regional hub facility. Latterly that intention has been heightened since VINCI won an operating concession there.

Those examinations were inconclusive, but traffic growth was strong before the pandemic. It is pertinent to do so again in light of two recent declarations.

The first is by the airport, which has said that a new runway, of 3.5km, should be ready before the end of 2022. Then Air Serbia said it was recommitting to its principle of building Belgrade into a regional hub airport.

The conclusion now is that there are grounds for believing this strategy is correct and should reap rewards, but that a number of caveats still remain.

Belgrade Nikola Tesla Airport's new 3500m runway is expected to be completed by Oct- or Nov-2022.

The works form part of a EUR80 million expansion project, including terminal expansion and construction of a new control tower, with completion scheduled for 2024 according to the CAPA Airport Construction Database.

Works will continue through to 2024 and a final figure of more than USD1 billion has been suggested as the airport attempts to position itself as a competitor to Vienna, Prague and Budapest airports, as well as in preparation for any cooperation in the Chinese Belt & Road Initiative.

Belgrade Airport: location with respect to Budapest, Vienna and Prague 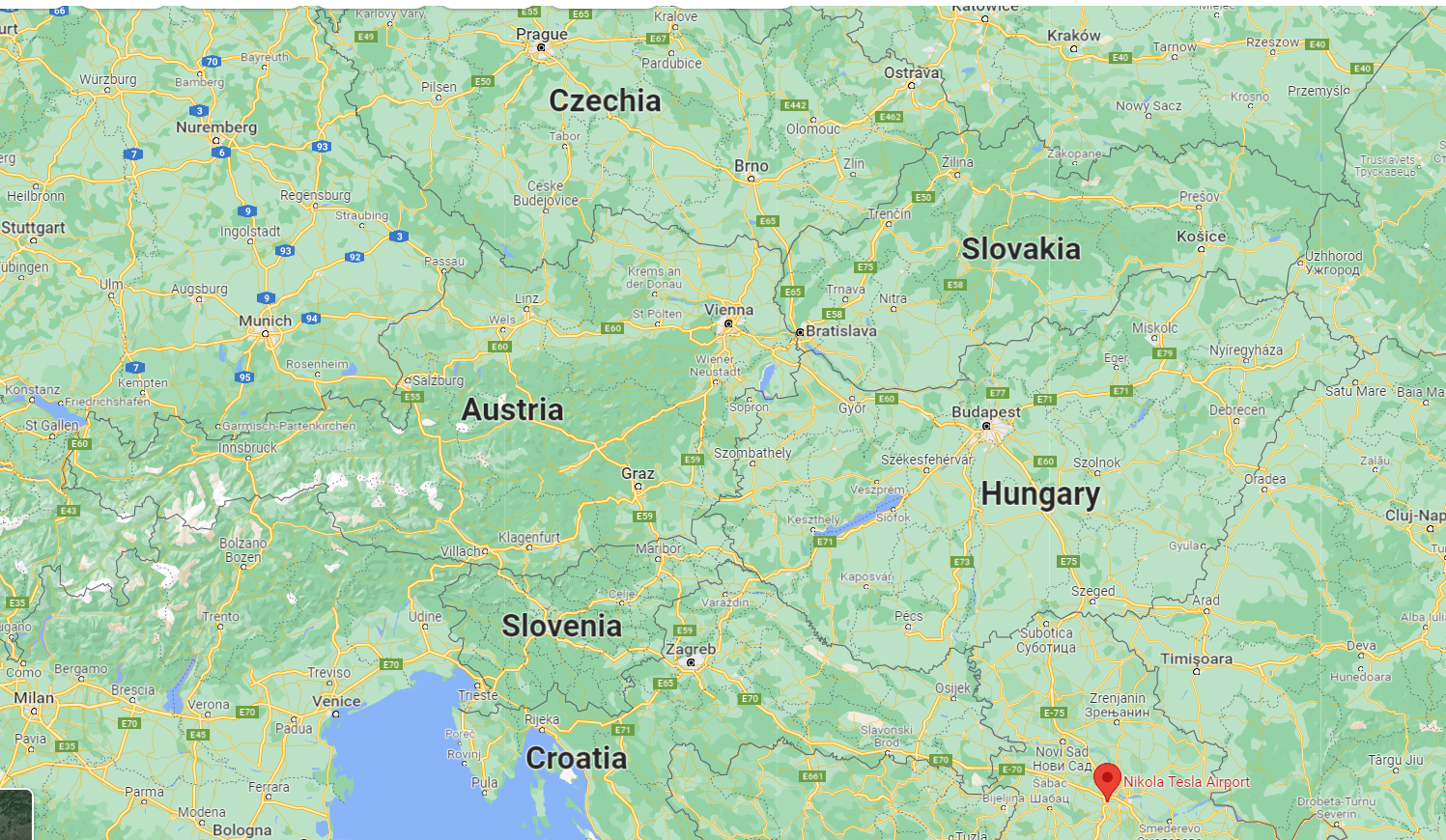 Check-in will be centralised, with some 100 check-in desks after which passengers proceed to the first floor for centralised security checks, then proceeding to a large duty-free area.

There have been several CAPA articles in the past about the expansion of Belgrade Airport and whether or not it can compete with the larger hubs in the region.

The first was in Mar-2015 and was anchored on an announcement by Air Serbia that it intended to develop a hub at Belgrade.

The conclusion was: “In five or six years time Belgrade Airport could certainly be in a position to challenge the accepted order in its part of the world but there are many more bridges to cross yet. Much of that future will be closely linked to Air Serbia's development – and there the signs are positive.”

The second was in Mar-2019, following the privatisation of the airport by way of a concession deal that was won by France’s VINCI Airports; its first airport in Central and Eastern Europe.

The conclusion there was: “Growth has not been what was anticipated…and the road may be a longer and harder one than expected”.

Recent announcements about the completion of the airport expansion works coincidentally come as Air Serbia reasserts (mid-Dec-2021) that it will continue to develop its hub and spoke model, despite the coronavirus pandemic strongly impacting demand for such flights.

Air Serbia’s General Manager for Commercial and Strategy Jiri Marek, speaking no doubt on behalf of many smaller airlines, recently said, “Covid-19 completely changed the network planning approach. You no longer use really long-term planning. You still make the three-year and five-year plan but, in a way, it is an exercise which you will keep changing and adapting based on external input.”

He added, “The network was always driven by demand and demand is the one most affected by the pandemic. It is fluctuating both ways. It is limited whenever you have new travel restrictions, while you have spikes in demand when something opens because people still want to travel. The question is how quickly you can adapt to these changes in demand especially with the network. What we observed through the whole pandemic is that the booking window is eight to ten days before departure where you get most of the bookings. The question is how you can make some mid- or long-term planning in such an environment”.

The airline has modified its internal practices in order to adapt to the fluctuating demand, monitoring the bookings on a daily basis.

Seasonal variation between summer and winter is high in Serbia. What Air Serbia did was to focus on some of the strong days like Monday, Friday and Sunday, where operations are almost at the same levels as they were before the pandemic, in order to provide connectivity.

At the same time it significantly reduced the weaker days, like Tuesday and Wednesday, which were always weak even before the pandemic, by allocating maintenance work on those days and other matters in order to ensure that on the strong days full resources are available to deliver the product.

Commenting on the introduction of new routes, Mr Marek said: “The reaction in the market is key. If you want to open a new destination, you no longer do it three or four months in advance with planning, calibration, different GDP inputs and so on. You basically see an opportunity and go after it. We proved that during the pandemic. We launched a couple of new destinations and some of them we launched in the course of two weeks. I think this flexible model will stay with us in the next five years, where you will still have to react very fast to all the changes coming. The biggest undiscovered truth of Covid is that change is possible and that the speed of change is incredible”.

In other words Air Serbia will henceforth operate “instinctively” as an LCC might be expected to, and even where apparent opportunities can be observed where a hub and spoke model applies.

So, given the dichotomy in the conclusions to the two previous reports, how is the airport progressing?

Before the coronavirus pandemic, and using 2015 as a starting point, passenger growth had been steady if unspectacular; but in 2019, and going against the grain of many other airports, it was strong, at 9.2%. 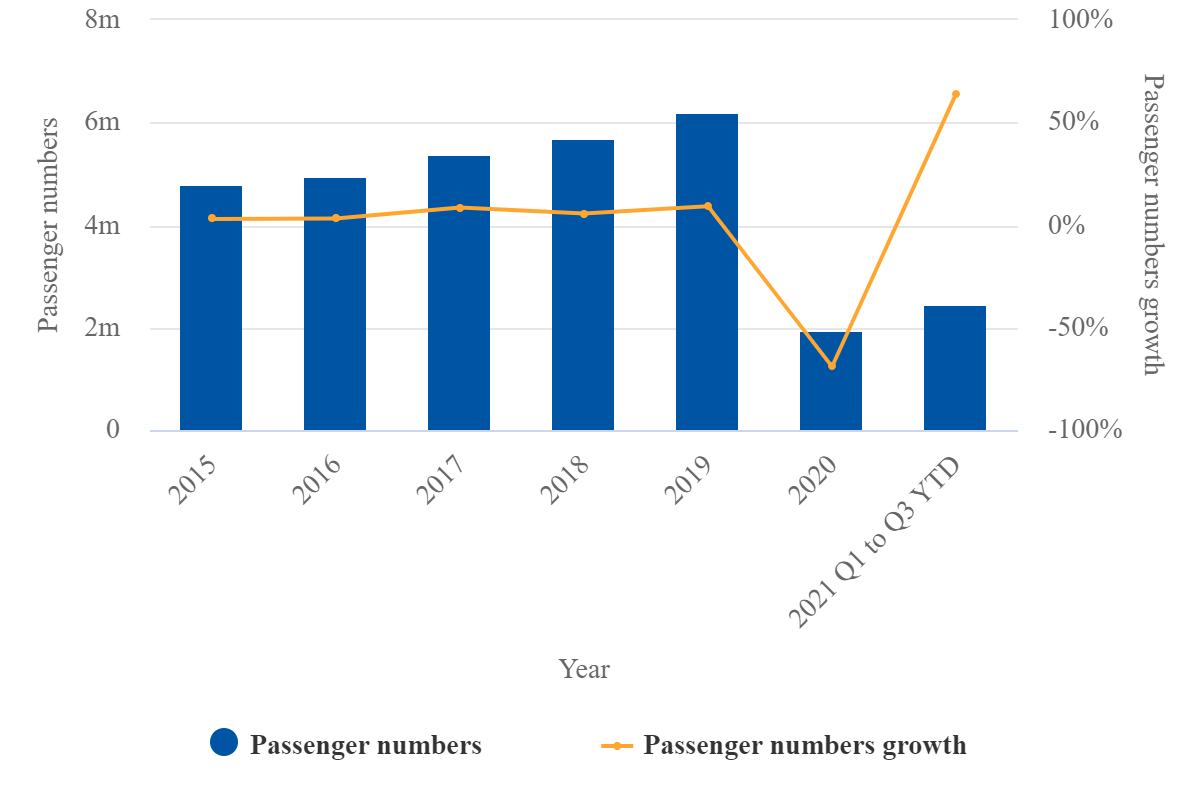 2019 passenger capacity levels could be achieved early in 2022, but cargo volume lags

Looking at seat capacity, 2021 has been a better year, with the capacity level approaching that of 2018 – if not 2019 – on two occasions already.

If the current trend continues 2019 levels should be achieved early in 2022. 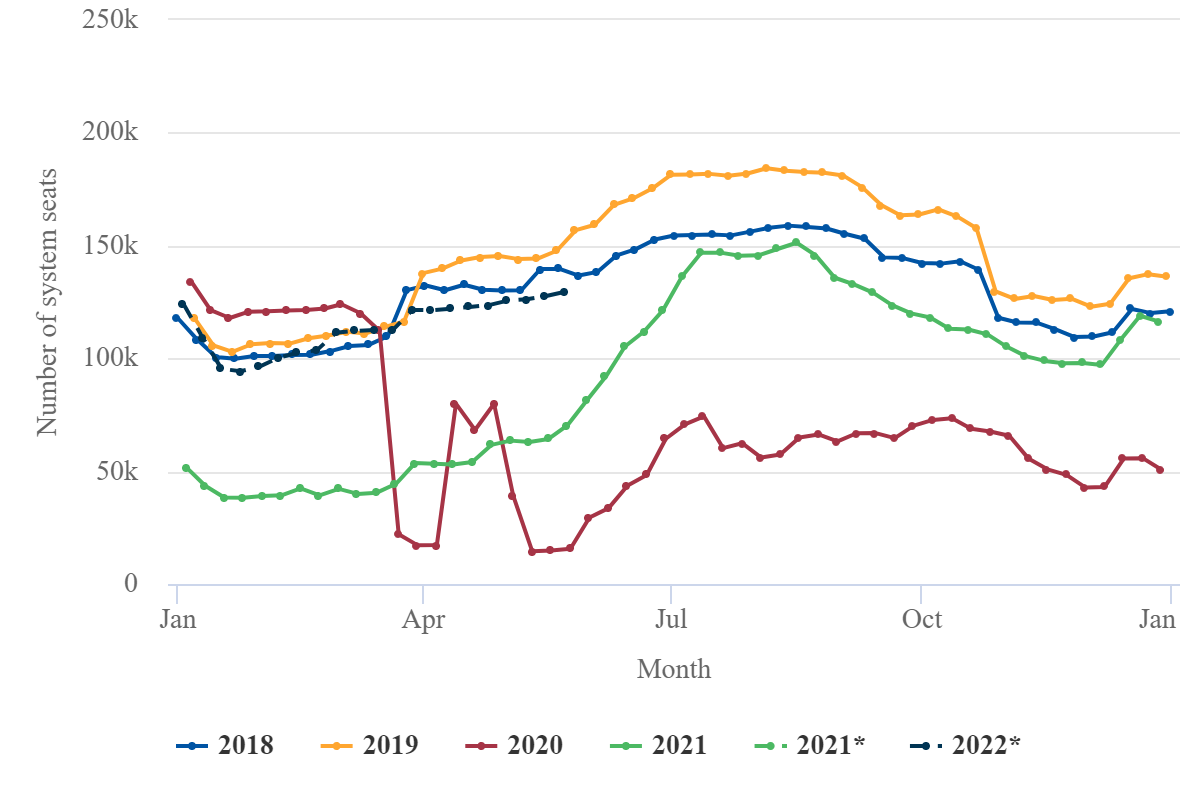 * These values are at least partly predictive up to 6 months from 20-Dec-2021 and may be subject to change.

Bearing in mind earlier comments about the Belt and Road Initiative and Serbia’s desire to be part of it, also Serbian support for Chinese external policies and previous Chinese interest in developing airports in Eastern Europe, cargo volume should also be considered.

China will need to trade with countries like Serbia to maximise benefits of the Belt & Road Initiative, since its options in the East European region are diminishing. 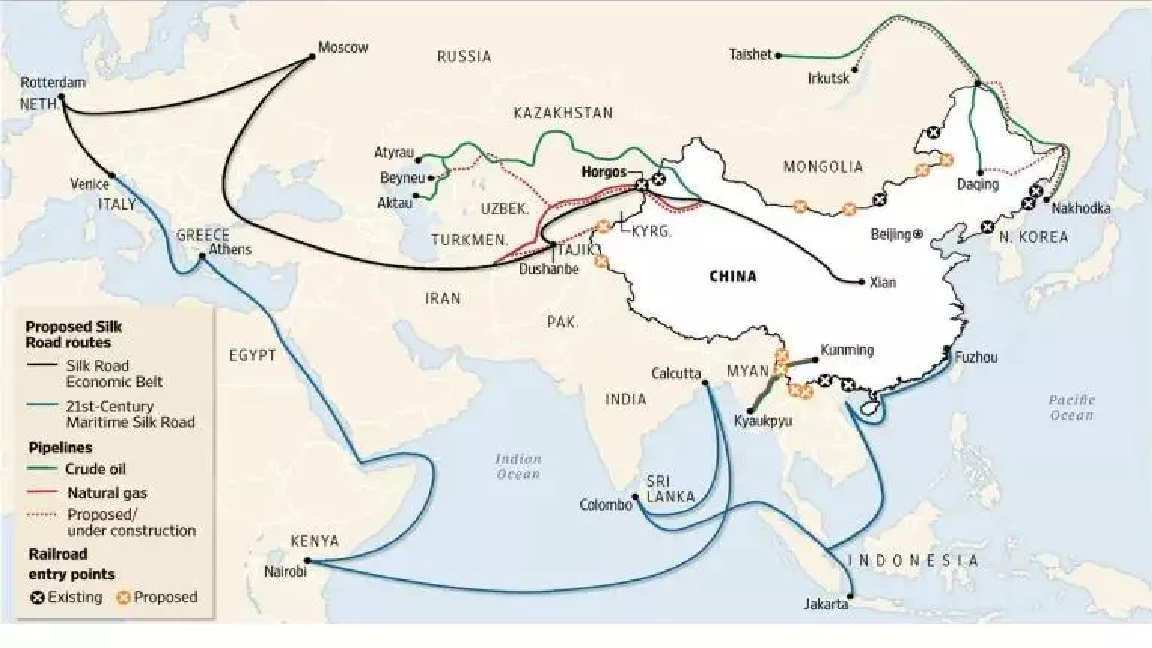 That cargo volume reduced to a similar extent as did passenger numbers (-64.7%), but there is still some way to go until 2019 levels are reached.

All flight operations at the airport are international right now and Air Serbia is the largest airline by seat capacity, with 38.3% (and 46% of movements).

After Wizz Air, Lufthansa and Turkish Airlines are the next biggest airlines by capacity. Air Serbia has code share agreements, enabling intercontinental connections in all directions, as well as its long-standing agreement with Etihad, which has reduced its stake in the airline within the past two years. All three, together with Air Serbia, are members of the Star Alliance.

That is important because direct flights are limited mainly to Western Europe (54%) and Eastern/Central Europe (38%). There is little capacity to the Middle East (6.2%), hardly any to the Americas, and zero to Asia Pacific. The new runway will help in the latter respects. 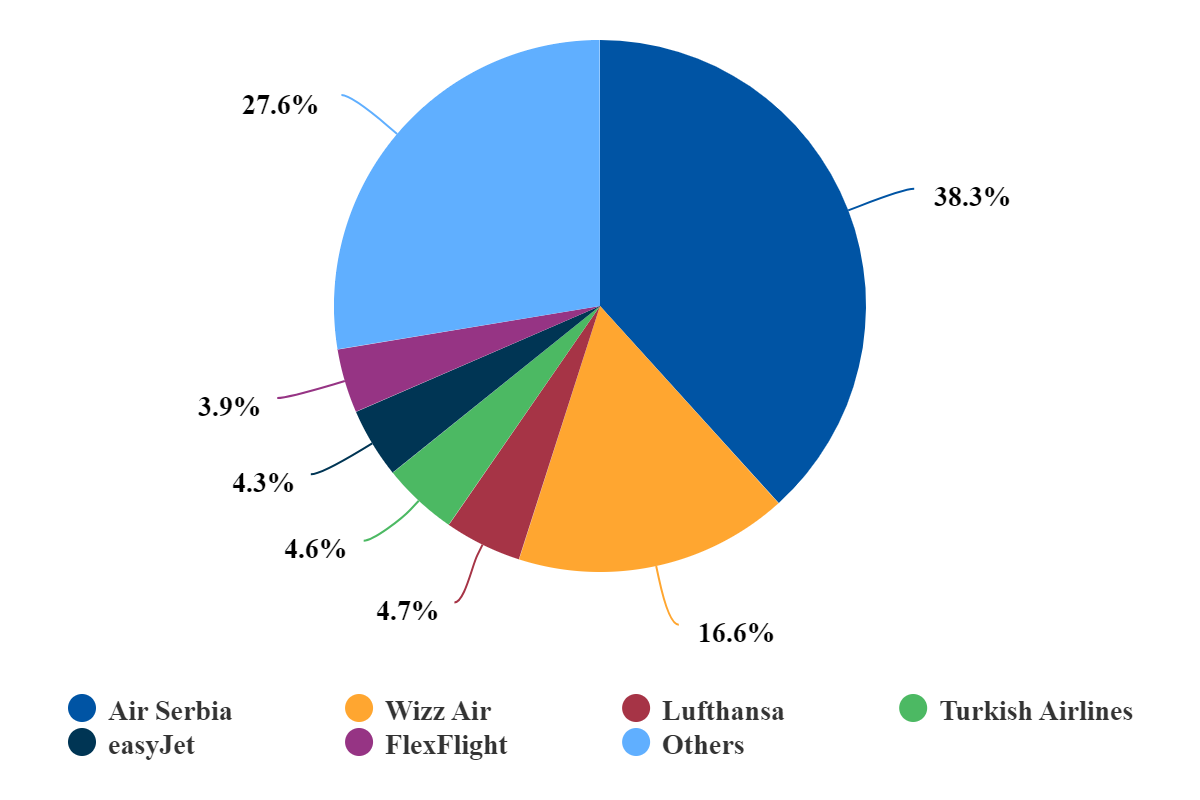 Low cost carriers have made inroads at Belgrade. Their total seat capacity presently runs to 28.8%, but this is considerably less than at Budapest (74.2%), Prague (46.4%) and even Vienna (33.9%), where LCCs were all but discouraged until recently.

Of course, all three of those places are much higher up the tourist wish list than Belgrade, tourism being the main stimulator of LCC demand.

On the other hand, it does lend some support to Air Serbia’s strategy of maximising Belgrade as a hub airport.

Yet again though, 77% of capacity is unaligned (i.e. not attached to an alliance member airline) and only 17% of the capacity is accounted for by Star Alliance, in which Air Serbia is a partner, along with Etihad, Lufthansa and Turkish Airlines. 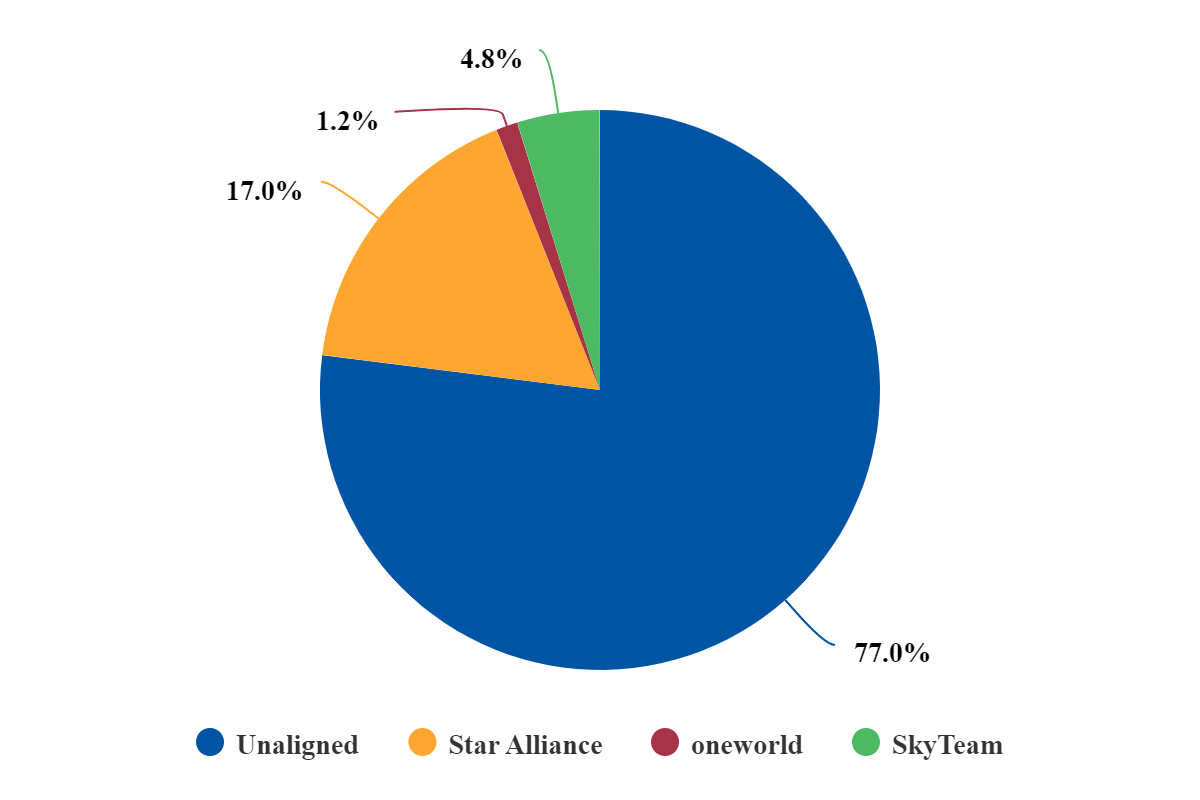 Utilisation of the airport as measured by arriving and departing capacity per hour is solid, well spread out across the day, and balanced in terms of arrivals and departures in the way that is appropriate to hub operations dealing with ‘waves’ of activity.

The chart below is for Friday 24-Dec-2021, which might be expected to be busier than a normal Friday on account of pre-Christmas flights. 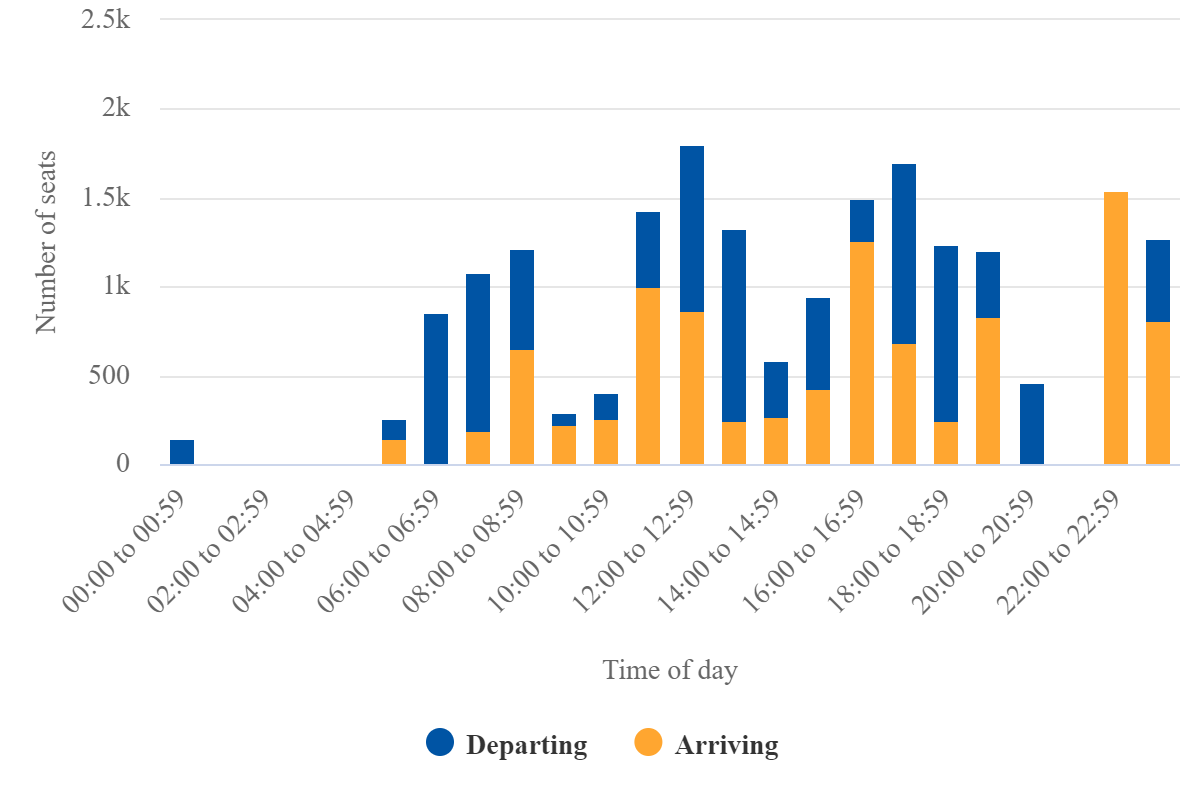 Political affiliations will influence decisions from here on in

The evidence points towards an airport that was beginning to realise a dream of becoming an alternative regional passenger hub – albeit a small-scale one – before the arrival of the COVID-19 pandemic and a cargo gateway airport both for within its own borders and beyond, which justifies Air Serbia’s belief that it can continue to make a go of its hub aspirations.

However, although that hub amounts only to Air Serbia and a handful of fellow Star Alliance members, and while Serbia’s political future is unclear – whether it throws its hat in with China or continues to pursue a goal of joining the EU – agreeing a hard and fast strategy is not easy.

Regarding the EU, Serbia was recognised as a candidate for admission in 2003 but the process towards membership has been a long and arduous one. A lot still depends on its ability or otherwise to normalise relations with Kosovo.

Another complicating factor is the announcement earlier in 2021 that a new Belgrade airport is to be built to the west of Belgrade, with three runways, as part of a national spatial plan.

It is not clear yet who would finance and build such an airport, but Chinese firms did bid for the Belgrade Airport concession and could yet find themselves competing with VINCI, at the very least in the cargo segment.