CEO Christopher Luxon is not resting on his laurels and is committed to growth in capacity and revenue while decreasing costs, although cost targets are for now opaque.

The domestic and Pacific Island networks are stable while trans-Tasman shows the wear from the weakening Australian dollar. But Air NZ has the advantage of efficiency with the highest load factors in the market. International has shown a strong improvement following exits from loss-making routes. Further gains will come from growth, creating scale and reducing unit costs, and partnerships, such as with Singapore Airlines.

Air NZ's 1H2014 operating revenue was down 1.6%, although once adjusting for the New Zealand dollar's gains against currencies in Air NZ's major markets, revenue increased 0.5%. But even with the small gain, this was against a 1.3% reduction in capacity. Operating costs were down 4.8% including foreign exchange, or down 1.6% including foreign exchange – slightly ahead of capacity reduction, showing overall efficiency gains in the business. 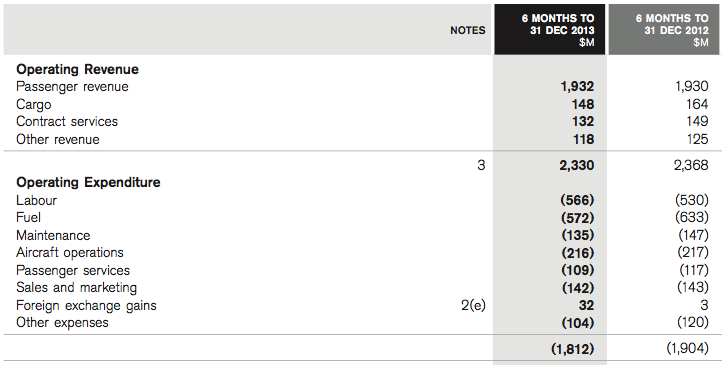 Mr Luxon expects FY2014 profits to be in excess of NZD300 million. The second half is traditionally the weaker part of the year. Mr Luxon delivered this historically high result on the same day competitor Qantas stole the headlines with a first half loss exceeding NZD200 million, the proclamation the environment was the worst Qantas had ever seen, and the announcement that 5,000 jobs and 50 aircraft would be eliminated (or also deferred in the case of aircraft) – something the carrier was happy to point out.

Mr Luxon's outlook on what is next for Air NZ – not just in the second half but future years – was remarkably different: "The realty is there is more to go" he said. Further gains, very much possible, will be quietly appreciated but will be strong achievements, especially in comparison to the regional outlook.

Driving Air NZ's performance was a lower fuel bill (down 9.6%), resulting from reduced flying but mostly due to lower prices and improving fleet efficiencies. Maintenance costs were also lower (8.2%) due to what Air NZ says were lower material costs for third-party maintenance work, but this area can continue to show gains as Air NZ's fleet phases out older, maintenance-intensive aircraft.

Short-haul markets were relatively stable while there were significant changes to long-haul markets that improved overall performance. Asia and UK/Europe revenue was down due to reduced flying, but this is a gain as loss-making routes were cut, including Hong Kong-London, which decreased cargo revenue, in turn dragging down profitability.

North America showed strong revenue growth. Yields were up 0.8% due to exiting loss-making routes, or up 3.7% excluding the impact of foreign exchange.

Air NZ's small but handsomely profitable domestic market grew efficiently, with a 4.1% expansion in ASKs about matched by 4% growth in RPKs with only a 0.6% decline in yield, all in all a strong performance given the size of growth.

Air NZ has a near monopoly on the domestic market but faces competition on trunk routes from Jetstar. 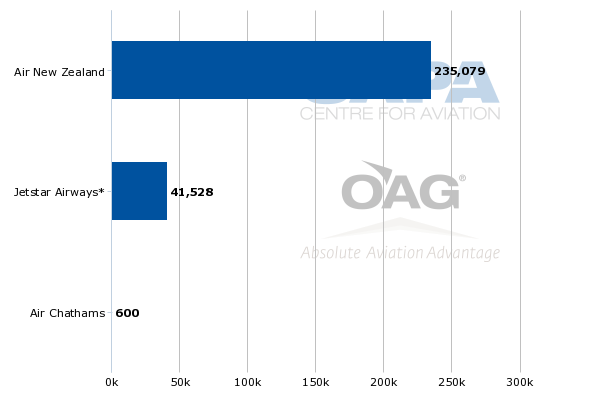 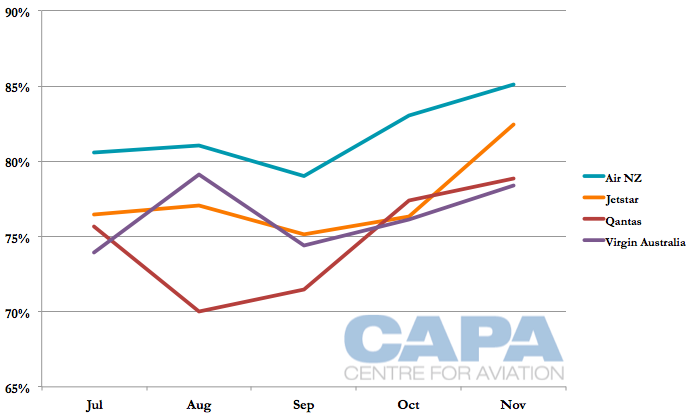 Air NZ expects a revenue boost from further gains with alliances, including its proposed one with Singapore Airlines.

Alliances are proving critical to Air NZ, unsurprising for an end-of-line carrier, and have largely been enabled by the New Zealand government. In assessing Air NZ's alliance applications, the government has not been toothless but nor has it shown the rigour of the EU or US authorities. This has been to Air NZ's advantage.

These partnerships and ultimately long-haul growth come after a period of not growing the network as Air NZ optimised its long-haul network following losses associated with the global financial crisis.

Air NZ is planning an average 5% capacity growth per annum over the next five years, including an "aggressive" 8% in the near future. This hinges heavily on New Zealand as a tourism destination, and a 6% visitor increase in 2013 is supportive of that objective.

Mr Luxon announced Air NZ would undertake a cost-cutting programme but declined to give targets or specific areas that could do with reduction. Mr Luxon said he wanted daily cost discipline and move vendor relationships from transactional to strategic as well as reduce the number of suppliers. These may very well be the objective, or alternatively Mr Luxon may have wanted to be opaque on a day competitor Qantas was announcing large and specific cuts.

A bright outlook, but competitor's future capacity could bring swift changes in results 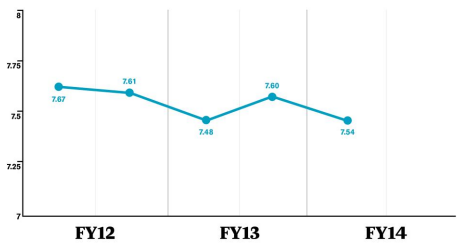 The gravity of Air NZ's previous situation was comparatively modest and, after some productive chair re-arranging (and removal), Air NZ's deck is in order by any measure. But it will not take much to rock this boat. The airline is small, at the end of the line and is vulnerable to casual moves by its major competitors.

Further capacity from mainland China, or a new entrant to North America – American Airlines continues to be rumoured – could dent performance, but perhaps there is room to give. The planned United 787 service to Melbourne, due to commence in Oct-2014 wil also have a significant impact on Air NZ's US feed, as Melbourne (and other Australian points) provide valuable fillers to its trans-Pacific services to the US west coast.

Even alliance partners have their own agendas, which do not necessarily coincide. But in general it would seem that, like its Australian partner, Virgin Australia in which Air NZ holds a 25% share, alliances must be the way of the future.

At the net level of profitability, as Air NZ grows its stake in Virgin Australia – important to securing access to the much bigger domestic market of its partner – it also increases its exposure to Virgin's losses.

Air NZ remains committed to Virgin in the long term, which must see Virgin exit the red. Mr Luxon will shortly take a seat on Virgin's board. Then Air NZ might be able to demonstrate the benefit of having exposure to common markets.

But Virgin's other shareholders – Etihad and Singapore Airlines – will be looking to do the same. The worry is potentially reduced by Air NZ's new common theme of partnerships: SIA and Air NZ will likely soon be partners between Singapore and New Zealand. They may find they have more in common in Virgin Australia than they do separately – although logic does not always prevail. For the time being they are however united in one feature: Qantas is the enemy.