European share markets were down on Tuesday on news corporate results in the US did not meet expectations, leading investors to doubt the strength of the economic recovery. Investors are now concerned markets may have advanced too quickly over the past nine months.

British Airways (-3.3%) shares took the biggest hit on Monday, following news the US Government recommended it and transatlantic alliance partner, American Airlines, divest particular services for approval of their antitrust immunity agreement. BA stated the request is “unworkable and unnecessary”. The US Department of Justice warned in Dec-2009 that granting anti-trust immunity could result in "competitive harm" on six transatlantic routes. The carriers have now called for their proposed alliance to be “approved and immunised without delay”. The US Department of Transportation is expected to make a decision shortly on the proposed alliance.

Lufthansa's (-2.9%) shares fell after the group reported only a 0.8 ppt year-on-year increase in load factor for Dec-2009, to 76.6%. Passenger numbers were meanwhile up 27.1%, to 6.4 million, following its acquisitions of Brussels Airlines, Austrian Airlines and bmi in 2008. Adjusting for the consolidation effect, the airline stated it handled 3.8% more passengers in Dec-2009, with
slightly higher capacity (+1.4%) leading to a passenger load factor increase of 1.8 ppts to 77.6%.

Air France-KLM (-0.9%) was also down at the end of trading, ending its longest period of daily share price gains (six) since Nov-2008. The carrier’s stocks dropped after reporting a 5.1% year-on-year decline in passenger numbers for Dec-2009, to 5.5 million, its 12th consecutive monthly decline. Load factor meanwhile gained 0.8 ppts, to 79.7%.

Dart Group (+4.1%) and Aer Lingus (+2.3%) meanwhile made the greatest gains on Tuesday, after the Irish carrier received recommendations for pay cuts and redundancies for its pilots from an arbitrator. 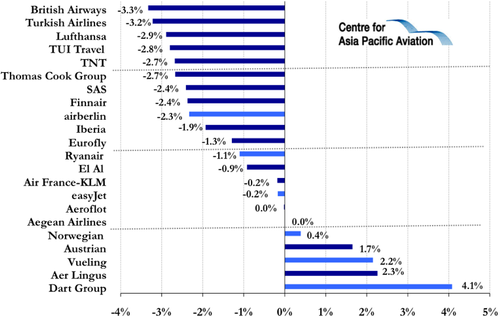