Air France-KLM Group is reportedly studying the possibility of resuming services between Paris and Tripoli, almost 22 years after the Lockerbie bombing (Pan Am 103) and 21 years after the subsequent downing of a French UTA Airlines flight in Niger, which was blamed on the Libyan Secret Service. No indication on the timing of the launch of Air France services has been disclosed. It has been reported that the carrier would operate three or four times weekly on the route with A320 equipment. Air France has been slow among European airlines in resuming flights to Tripoli, after an embargo against Libya under its leader Moamer Kadhafi was lifted in 2003. Partner KLM does operate six flights weekly from Amsterdam though. The French pilots union, SNPL, which has blocked previous plans to resume the route, said it was not opposed in principle but the move would depend on working conditions and safety.

Air France’s decision comes as Libya is once again under international scrutiny as a result of the ‘al- Megrahi’ (jail) release saga, involving the only person to have been found guilty and jailed for the Dec-1988 Pan Am atrocity.  The move comes as Libya, still a major source of oil and gas, continues its attempts to ‘rejoin’ the international community. (It has the largest proven reserves in Africa with over 40 billion barrels – 3.3% of the world’s total - and 1.5 trillion cubic metres of natural gas, 0.8% of the global total).

As a result of the UTA bombing (an airline that was subsequently taken over by Air France) relations between France and Libya soured, but have gradually improved since and in 2004 they signed an agreement over compensation for the victims' families, leading to an improvement in economic ties. Air France is also attracted to the potential for connecting traffic over Paris Charles de Gaulle airport (CDG), presumably to other ‘oil’ locations. Air France flies to oil and gas exploration hotspots like Norway (Oslo) and Aberdeen in Europe; Houston; Caracas; several cities in Saudi Arabia; and, because intra-African travel can still be difficult, prompting journeys to be made via Europe, Lagos, Nigeria and numerous cities around the Gulf of Guinea.

The airline of Africa

Those European airlines that either continued operating throughout the embargo, or (mostly) resumed service at Tripoli when it ended, include Air Malta, Alitalia, Austrian Airlines, British Airways, Bulgaria Air, JAT, KLM, and Lufthansa. Currently, no US airlines operate to Libya and are unlikely to do so until the al-Megrahi release decision is concluded to the satisfaction of relatives and US Senators (if it ever is).

The country's main airlines are Libyan Arab (27 routes including seven in Europe), Afriqiyah Airways (29 routes including nine in Europe) and Buraq Air (10 routes including one in Europe). Both Libyan Arab and Afriqiyah are government-owned, grouped under an umbrella organisation. Buraq is privately-owned. Afriqiyah was intended to be ‘the airline of Africa’ with a hub in Tripoli and that objective had been substantially achieved, judging by to the cross section of European and African passengers killed in the May-2010 crash of Afriqiyah flight 771. Of 92 passenger fatalities, 67 were Dutch, nine from Austria, Britain, France or Germany and 12 from South Africa. Only two were Libyan.

Libya’s other major international airport is Benina International at Benghazi. Currently no European airlines fly there. In fact all services there are operated by African airlines, with the exception of Turkish Airlines and Royal Jordanian.

Political controversy has surrounded the relations between Libya and some of the European countries with airlines now operating at Tripoli. Britain released the convicted Lockerbie bomber for ‘medical’ reasons a year ago and recently allegations have surfaced that the decision was actually connected with an oil deal involving BP plc, one that is denied by the authorities. Moreover, the case of a murdered female police officer, shot from inside the Libyan Embassy in London in 1984, has never been solved, although the Libyan government did eventually accept responsibility and paid compensation to the family (as it did to the families of PA103 victims, a UN condition for the lifting of sanctions).

Malta had, for many years, good relations with its neighbour just to the south when many other countries did not, hosting a major Libyan government presence on the island. The Pan Am 103 bombing allegedly originated with a flight from Malta to Frankfurt, the device being transferred on to PA103 there. The shop where clothing that was placed in the bomb suitcase was bought was close to the Libyan Consulate in Sliema.

Austrian Airlines has good reason to remember Libya. In Dec-1975 the notorious terrorist Carlos the Jackal and his team commandeered an Austrian Airlines DC-9 to, among other places, Tripoli, after their murderous assault on the OPEC headquarters in Vienna. Many Germans will recall the bombing of a discotheque in Berlin in 1985 that was popular with US soldiers, which directly resulted in US air strikes against Tripoli and Benghazi in an apparent attempt to kill Colonel Kadhafi.

More recently (2003) political and economic agreements have been reached by western countries with Libya in an attempt to prevent the nation developing nuclear weapons, even though it is not clear it had intention of so doing. Libya also renounced terrorism as part of the deal and the UN accepted it in 2006, subsequently permitting Libya a seat on the UN Security Council for 2008-9. Colonel Kadhafi in Feb-2009 took over as chairman of the African Union for the 2009-10 term. In Sep-2009, a Libyan took over the year-long presidency of the UN General Assembly.

That is just a snapshot of the political deep hole Air France may step into if it does resume air service. There are suggestions that the decision to return was taken at least in part because of the order by Libyan Airlines for 15 Airbus jets including A320s, A330s and four A350s, which dates back to 2007, but for which loans were only agreed with local banks earlier this month. Afriqiyah Airlines also has six A350s on order. The issue goes a little deeper than a mere thank you from the country where Airbus is headquartered – Libyan Airlines could easily have favoured Boeing after sanctions were lifted.

For Libya, its decision to opt for Airbus smacks of a desire to home in on the Parisian market in particular – rather than the regional ones to which it has been offered access to date - and it gains kudos by ‘endorsing’ products (aircraft) built mainly in France. The stakes are high – France has the largest Islamic population in Europe, many are located in and around Paris (though also in Marseille), and many have connections to North Africa.

But the ‘economic’ Libya of today is somewhat different from the 1980s, at least on the surface. Apart from the advent of several private airlines, including Buraq, there has been extensive refurbishment of the two main airports.

In Sep-2007, the Libyan government announced a USD2.1 billion project to upgrade and expand Tripoli International Airport, contracted to a joint venture between Brazil’s Odebrecht, TAV Construction (Turkey), Consolidated Contractors Company of Lebanon and Vinci of France, with Aéroports de Paris Engineering (AdPI) as the designer. The project involves the construction of two new terminals at the airport, each of 162,000 sq m, with a collective capacity of 20 million passengers when completed in 2011.

Work started in Oct-2007 on the first new terminal. The initial capacity will be six million passengers when the first module comes into operation. The completed airport is planned to strengthen Libya's position as an African aviation hub. 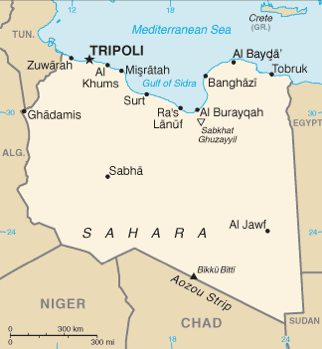 A new terminal with a capacity of five million passengers will also be developed north of the existing runway at Benina International in Benghazi with the first-stage contract awarded to Canada’s SNC-Lavalin. The final cost is estimated at EUR630 million. As with Tripoli International Airport, the new terminal was designed by AdPI. It is still unclear when the terminal will be open for operation. These developments are part of an extensive new infrastructure programme being undertaken by the government of Libya throughout the country.

And an African hub role as liberalisation speads

The Libyan economy depends primarily upon revenues from the oil sector, which, according to the World Factbook, contributes about 95% of export earnings, 25% of GDP, and 60% of public sector wages. Substantial revenues from the energy sector coupled with a small population give Libya one of the highest per capita GDPs in Africa. When all sanctions were removed by Jun-2006 this helped Libya to attract greater foreign direct investment, especially in the energy sector. Libyan oil and gas licensing rounds continue to draw high international interest; the National Oil Corporation set a goal of nearly doubling oil production to three million barrels per day by 2012 but this target may slip to as late as 2017.

Libya faces a long road in liberalising the socialist-oriented economy, but initial steps - including applying for WTO membership, reducing some subsidies, and announcing plans for privatisation - are laying the groundwork for a transition to a more market-based economy. The non-oil manufacturing and construction sectors, which account for more than 20% of GDP, have expanded from processing mostly agricultural products to include the production of petrochemicals, iron, steel, and aluminium.

The country's geographic position does place Tripoli well to offer a transfer role, particularly for travellers to and from Europe. As more services are established and as Libya's political past fades into history, that role will grow, bringing with it a valuable economic spinoff. Meanwhile, Air France will be proceeding with some delicacy if and when it does resume service to Tripoli.