Air France shares had dipped as much as 10% earlier in the month as credit jitters spread, but the lost ground has now been regained with shares closing at EUR10.75. Some investors, at least, are clearly expecting a reasonably strong outlook from management, as premium demand tilts in the right direction, albeit still weakly.

Always optimistic Airbus CEO, John Leahy, last week said the "recession is definitely over", confirming the company would exceed its order target for 2010 after ending Farnborough with USD13 billion in firm orders.

However, the prospect remains of escalating strikes by air traffic controllers this summer. Air France was able to limit the damage of last week’s strike, but the inevitable move towards rationalising Europe’s over-controlled airspace and reducing the salaries of the controllers will ensure that this remains a continuing problem.

Most airlines performed well on the day, as European markets generally fared well on the back of milder than expected outcomes of the “stress tests” performed on European banks, creating a warmer feeling among investors.

Aside from volatile Eurofly (-5.0%), TUI Travel saw a substantial drop of 4.1% in value, as rumours washed around the market of a takeover by 54% owner TUI AG. Morgan Stanley had earlier in the week suggested that TUI AG might acquire the remainder of the operator’s shares. 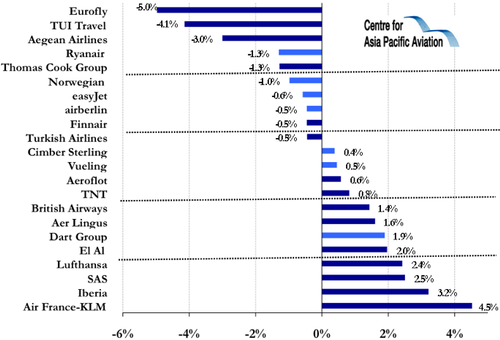