Air France to rationalise frequencies with A380s; Eurofly and SAS gain; Vueling down

The majority of European airline shares were up again Thursday (17-Jun-2010) as wider markets gained for a seventh consecutive day. Markets were up as Spain completed a successful auction of its bonds, but gains were hampered by a rise in US claims for jobless aid.

Thomas Cook Group (-1.0%) CEO, Manny Fontenla-Novoa, stated the company is looking to acquire a German travel company to boost sales to destinations where it lags behind competitors. The CEO stated it may spend more than EUR100 million on the acquisition. Mr Fontenla-Novoa stated the company has not resumed talks with German competitor, Oeger Group. Talks with the group failed earlier this year. Discussions with a Russian competitor are meanwhile expected to succeed “within weeks”.

Air France-KLM slipped for the day. Air France stated during trading that it can, with A380 equipment, rationalise frequencies on busy routes by replacing two flights leaving at similar times with one, while offering the same seat capacity at a 20% reduction in operating costs. The carrier stated the main deck of the A380 has equivalent capacity of a B777-200 and the upper deck that of an A340-300. Air France has ordered 12 A380s and has taken delivery of three. A fourth will join the fleet in summer 2010 and will enable Air France to serve Tokyo from 01-Sep-2010. See related report: Recovery trend resumes at Paris Charles de Gaulle Airport 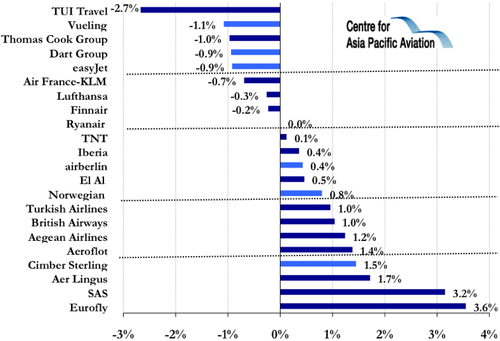