All is not well in Air France-KLM. The group has reported another decline in quarterly profits. Its 2Q2015 operating result was down by 2% and insufficient to bring 1H2014 into positive territory after an operating loss in 1Q2015. Currency movements, specifically the weaker EUR versus USD, had the effect of inflating both revenue and costs, but the net impact accounted for the deterioration in the operating result.

Nevertheless, this should not detract from Air France-KLM's very weak unit revenues, which appear immune to attempts at improving the product and may only respond to capacity cuts. Either way, unit cost reduction will remain crucial if the group is to return to a sustainable profit path. Long haul routes in particular are under threat.

The development of its medium haul low cost airline, Transavia, continues to be rapid in France, but the scale and profitability of this operation are weak compared with Europe's leading LCCs. However, the establishment of Transavia Europe, with bases beyond France and the Netherlands, could be back on the agenda after a change in leadership at the French pilot union.

In 2Q2015, Air France-KLM recorded a net loss of EUR79 million, a deterioration from a loss of EUR11 million in the same period of 2014. The result was burdened by non-operating items such as foreign exchange losses and negative changes in the fair value of financial instruments. Nevertheless, the operating result, while in profit, also fell from 2Q2014. At EUR185 million, it was down 22% year on year. Revenue grew 3.0% to EUR6,642 million and the operating margin fell 0.9ppts to 2.8%. 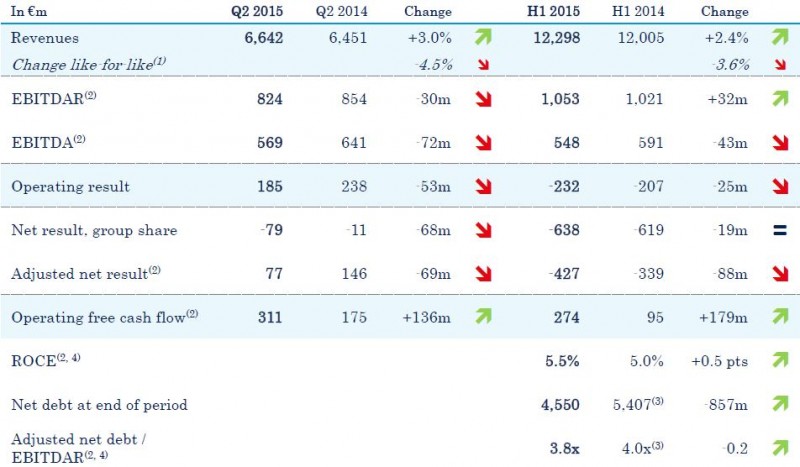 Air France-KLM had suggested at the beginning of the year that lower fuel prices would likely be passed on in the form of lower fares.

In 2Q2015, this was borne out by the figures. The group's operating result benefited by EUR367 million from lower fuel prices (excluding currency movements), a figure precisely balanced by the negative impact of lower unit revenues (defined for this purpose by Air France-KLM as revenue per equivalent ASK, which groups both passenger and cargo capacity).

The group managed to lower its unit cost by 0.5%, a EUR30 million benefit, but this was balanced by an increase in pension-related cost at KLM.

Maintenance is only major segment to grow its operating result in 2Q2015, but Cargo lost

The Passenger segment accounted for more than 100% of the group's operating profit in 2Q2015, with a EUR210 million result. This was EUR45 million down on 2Q2014, mainly explained by adverse currency movements.

The Maintenance segment increased its operating result by EUR21 million to EUR51 million in 2Q2015. This division benefited from the stronger USD, its main revenue currency. Maintenance also benefited from strong growth in third party revenue (+38.5%).

The group result was burdened by a EUR78 million loss in the Cargo segment, down EUR33 million year on year. Unlike the Passenger segment, most of this adverse change in the Cargo result reflected the underlying business performance, rather than currency movements. LCC Transavia's operating loss of EUR6 million was the same as in the prior year period. 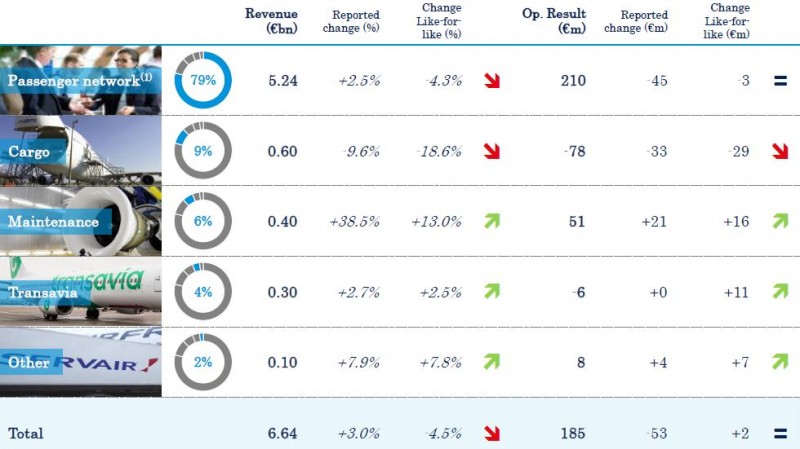 The passenger segment (which does not include Transavia) increased available seat kilometres (ASKs) by only 0.4% in 2Q2015, maintaining the cautious approach of 1Q, when ASKs were flat (+0.1%). Passenger load factor gained 0.2 ppts year on year to reach 85.0% in 2Q2015. 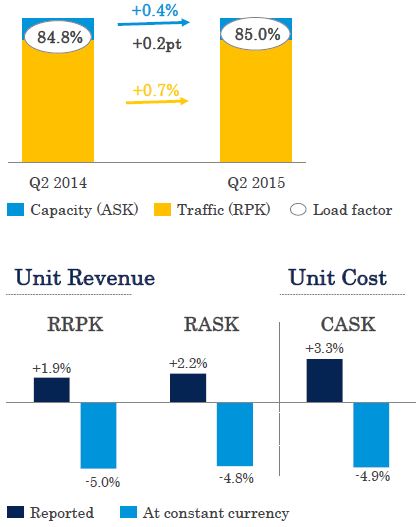 On long haul routes, capacity growth was higher than for the network overall, but ASK growth here was still modest at 1.4%. Nevertheless, long haul RASK fell by 5.5% at constant currency, a deterioration from 1Q's 3.3% drop.

The Latin American network suffered the biggest fall in constant currency RASK, down 13.7% after a fall of 6.7% in 1Q, with Brazil suffering particularly from weak demand. RASK was also weak to Africa & Middle East (-7.2%, after -6.5% in 1Q), partly reflecting weak demand from oil and gas sector customers in Africa, and Asia (-6.3%, similar to 1Q's -6.5%), where Japan was particularly soft.

The only part of the long haul network to benefit from an increase in constant currency RASK was Caribbean & Indian Ocean, up 3.7%. It also cut its capacity, with ASKs down 1.1%. 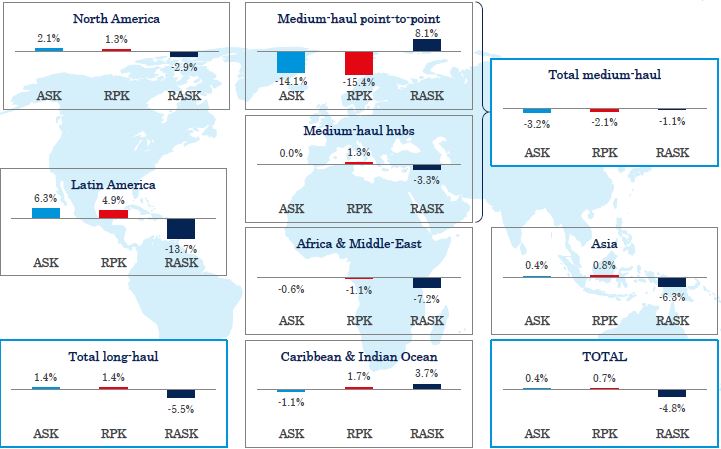 Is it time for capacity cuts?

Air France-KLM has a disciplined approach to capacity growth, but it remains clear that - even with modest growth - there is an inverse relationship between ASK growth and RASK growth at constant currency.

The group has revised down its capacity growth plan for 4Q2015from +2.3% to +0.3% and for 2H2015 from +1.8% to +0.9%. However, its recent performance suggests that perhaps capacity cuts are the only way to achieve positive unit revenue growth.

CEO Alexandre de Juniac told analysts at a presentation on the 2Q results that "significant" long haul capacity cuts will be implemented if current negotiations with employees over productivity improvements are not successful.

He said that a number of long haul routes were loss-making and so a lower cost base was needed.

Transavia increased ASKs by 7.1% in 2Q, following 5.1% growth in 1Q. Again, the focus of the growth is Transavia France, where it was 22.5% after 48% in 1Q. Transavia Netherlands cut ASKs by 2% as it continued to move away from its charter activities. Transavia's load factor dropped slightly, but remained at the high level of 90.3% (-0.4ppt).

Transavia's 2Q revenue grew by 2.7%, less than capacity growth as RASK fell by 4.4%, demonstrating the highly competitive nature of European point to point markets, which are increasingly dominated by strong pan-European LCCs.

Transavia's CASK also fell at the same rate of 4.4%, ensuring that its 2Q2015 operating loss was contained at last year's level. 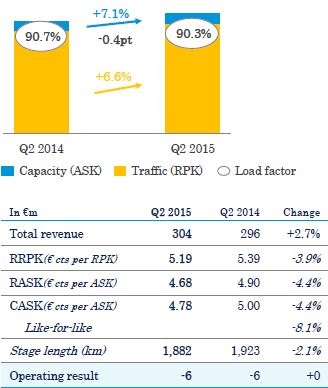 Air France-KLM expects Transavia to suffer a "temporary negative impact" from its exposure to Tunisia, Morocco and Greece in 2H015. These three countries represent 22% of Transavia's summer 2015 flights. However, CEO Alexandre de Juniac told said at the 2Q results presentation that the LCC was making capacity adjustments and was "much more nimble" than the group's FSC airlines. He added that Transavia's yield to North Africa were still "very good", benefiting from the strong VFR market.

Transavia's Europe plans could be revived

The group continues to develop Transavia on point to point leisure routes, with France the main focus for its growth. It plans to increase the base fleet (ie excluding short term summer lease capacity) from 53 aircraft at the end of 1H2015 to 65 in 2017.

This compares with a fleet target of 100 in 2017 announced in Sep-2014 at Air France-KLM's last investor day. Since then, a dispute and subsequent agreement with French pilots led to the abandonment of plans to add a third leg, Transavia Europe, to the Dutch and French Transavia operations and this explains the lower target.

However, there now appears to be some hope that the Transavia Europe plans could be revived. Mr de Juniac told analysts that there was already an agreement with the Dutch pilots to look at ways to develop the brand outside the Netherlands and he added that French pilot representatives have recently indicated that they are now ready to discuss Transavia Europe's expansion beyond France. The current agreement with French pilots limits Transavia France to 40 aircraft.

According to the CAPA Fleet Database, Transavia France currently has 20 Boeing 737-800s and 16 on order, for delivery by 2018. The development of Transavia Europe will be an important strategic step, but requires union agreement. 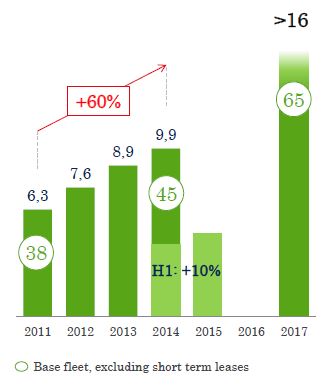 Unit cost increased by 1.7% as reported, down 8.5% at constant currency, and this led to the higher loss. 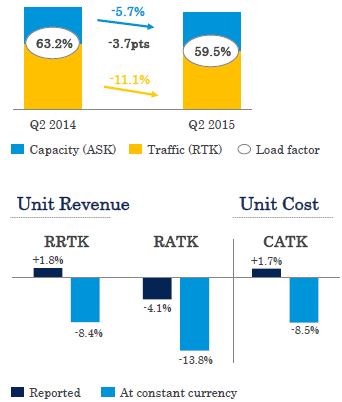 Costs rose 3.9%, faster than revenue growth, which was boosted by currency

The group's total costs increased by 3.9%, faster than revenue growth, but would have fallen by 4.7% at constant currency. Fuel costs were up by 1.5%, in spite of the fall in market prices, due to the weaker EUR and the impact of Air France-KLM's hedging programme.

Employee costs, including temporary staff, increased by 2.5% mainly due to increased KLM pension expenses. Headcount was down by 1,600 full time equivalents in the quarter. 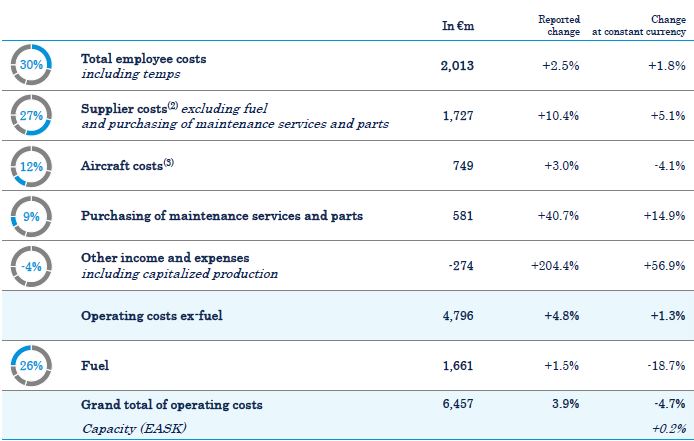 Only sustainable profitability can fully restore the balance sheet and ensure the ongoing strength of the group.

Unfortunately, its earnings momentum is negative, with the weakening RASK trend driving a deterioration in operating profit in each of the past two half year periods. 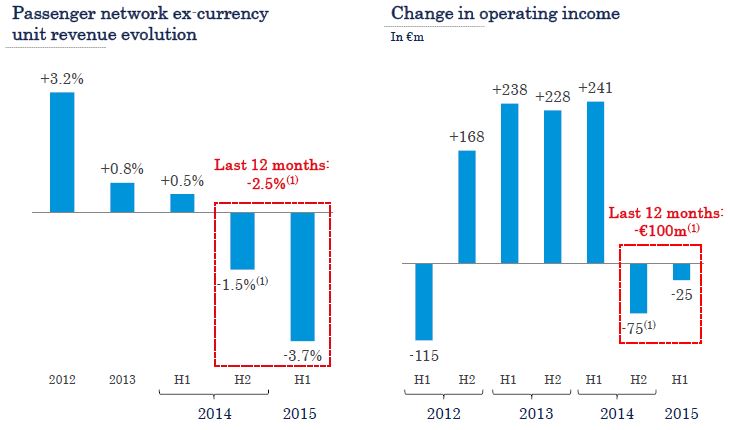 The Air France-KLM group has invested in new long haul cabins and in the medium haul hub feed product and Air France has gained recognition from Skytrax as the world's most improved airline in 2014, but this does not seem to be flowing through to unit revenue improvement.

This again refocuses attention on the need for cost reduction and the group still aims to achieve a unit cost fall of 1% to 1.3% in 2015 and 1.5% pa until 2017. Cost reduction measures under the group's Perform 2020 plan are being extended.

Negotiations over productivity improvements at both KLM and Air France will be crucial to achieving greater cost efficiency. Agreements have been reached with labour groups at KLM, although a pilot vote is due in Aug-2015. At Air France, negotiations are ongoing, with conclusions expected at the end of Sep-2015.

While conducting these talks, management will need to highlight the urgency of the group's situation. Air France-KLM has reported net losses in each of the past four years. If it cannot make a profit several years into an airline industry upswing, it never will.

It was time for the Air France-KLM group to bite the bullet several years ago. The bullet is getting bigger and tougher each year and the group's teeth are not getting any sharper.