Shares in Air France-KLM gained 2.1% yesterday, forecasting it will see some 'green shoots' by the end of 2009. The carrier expected to see "limited deterioration" in conditions in 2Q2009/10, achieving stability in the last two quarters, with even a slight improvement by the end of the year (see below).

Lufthansa's shares rose up 2.6% yesterday as the Frankfurt DAX closed 2.45% higher. Divisions with Fraport, in which it owns 9.1% have emerged.

British Airways gained 0.8% yesterday, as it entering a 14-day "cooling-off period" from union negotiations with Unite. The carrier is again attempting to reach an agreement on employee pay cuts. 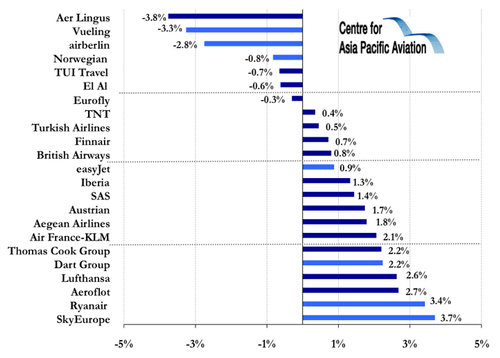 Deterioration in the economic environment noted at the end of 4Q2008/09 continued during the subsequent three months. As a result, revenues for the Air France-KLM Group for 1Q2009/10, ended 30-Jun-09, recorded a decline of 20.5% year-on-year to EUR5.19 billion.

The cargo business continues to be particularly affected by the crisis. Cargo revenues recorded a drop of 41.5% year-on-year to EUR544 million due to a decline in traffic of 22.7% for a 17.2% reduction in capacity. Unit revenue per RTK declined by 25.1%.

"The Group’s revenues reflect a continuation of the trend of 4Q2008/09, ended 31-Mar-09, in line with our expectations. We maintain our assumption of a more limited deterioration in the second quarter and stability in the last two quarters, with even a slight improvement at the end of the year compared with the 2H2008/09, itself already impacted by the crisis".