Air France-KLM revenues fall 20%: the “look over there” syndrome. How much worse does it get?

Today, most full service carriers are understandably wincing at current results, meanwhile pointing at their bank balance to distract attention. Fighting this war is not about saving lives, but about having enough resources to survive till it is all over, whenever that may be. There is however little in the Air France-KLM report to reassure investors that we have even touched the bottom yet.

We are no longer shocked to hear of revenues being down by a fifth – although shocking it certainly is – but when nearly everyone else is experiencing similar devastation, it is hardly news that the odd one or two points of difference from analysts’ “expectations” may occur.

The warm feeling that a strong balance sheet can give

Clearly this war is not going to be over by Christmas for the airlines, even if a glimmer of economic hope appears by then. So management emphasis is on its bank balance and available credit, to reassure investors that this airline will survive whatever comes along. The new battleground is about emphasising that ours is bigger than the others, not about actually being profitable.

So next comes the necessary assurance to investors that “despite this difficult environment, the group benefits from a high level of liquidity of EUR5.7 billion including EUR1.2 billion in credit facilities. During the quarter, Air France-KLM had a successful EUR661 million convertible bond issue, while on 28th July, KLM extended the term of its EUR530 million credit facility from July 2010 to July 2012, with the possibility of a further prolongation to July 2013.”

But the blood is flowing

The carrier will need all the financial backup it can muster, because the Jun-2009 quarter results were indeed unattractive, even of not quite as bad as the previous quarter.

Cost cutting and capacity reductions: European services to be overhauled

Pruning costs is really the only thing to do, as yields plummet, but that is hard to do – particularly for Air France itself, where the local political climate does not favour substantial personnel reductions, even where there have been radical cuts in operations.

As unit yields race down faster than costs can be cut, capacity reductions are inevitable. The Group is planning to make what sound like seminal cuts in the European operation – “undertaking a review of the medium-haul network, both in terms of destinations and products” –and is prefacing a further 5% year on year reduction in cargo capacity, including grounding four freighters. The short-haul European revamp will be implemented beginning next calendar year. 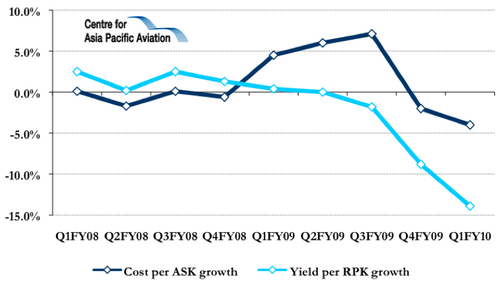 As if digesting all that bad news made management even less certain of the outlook, from earlier suggesting that “global economic activity has stabilised”, by the end, the report concludes that “If the scenario of a stabilisation in the global economy, followed by a gradual recovery at the end of 2009 is confirmed, the trend in unit revenues could be as follows:

- In cargo, a continuation of the current trend followed by a progressive stabilisation in the Second Half.”

The tentativeness is of course understandable. No-one knows where we are heading, even if the stock market is still rising strongly.

But the cargo assessment is what is most worrying. If cargo is still the reasonably reliable forward indicator it has usually been, we – or Air France-KLM at least – still haven’t found the bottom. “Despite a reduction in capacity of 17.2%, cargo suffered a sharp decline in traffic of 22.7%, and a drop in unit revenues per transported tonne kilometer of 25%. Revenues for the period declined 41.5% to EUR547 million.”

Surely it can’t get much worse than that?