Air France-KLM has reported an operating profit of EUR122 million for the year to 31-Mar-2011, as the carrier cut costs and raised revenue despite the challenging 12 months. The carrier’s net profit was EUR613 million, boosted by the sale of the company’s stake in Amadeus. This is the carrier’s first headline profit after two years of losses.

Shares in the carrier rose 1.9% on Thursday.

Restated net income was a loss of EUR234 million, taking into account the value of the company’s hedging portfolio. The company reported a final quarter operating loss of EUR403 million, affected by “numerous external results”.

Air France-KLM will not offer a dividend on the result, as it is focussing on cutting its net debt ratio.

Revenue at the carrier rose 12.5% year-on-year. Operating costs were up just 5.4%, despite a 20% increase in the carrier’s fuel costs. Labour costs were reduced by 1.4%.

Air France-KLM and its Skyteam partners Alitalia and Delta have announced that they plan to cut trans-Atlantic capacity over autumn 2011 by 7-9% compared to 2010. The carrier’s cited overcapacity and an overaggressive expansion in 2010. The three airlines operate 260 daily frequencies with 144 aircraft on trans-Atlantic routes. 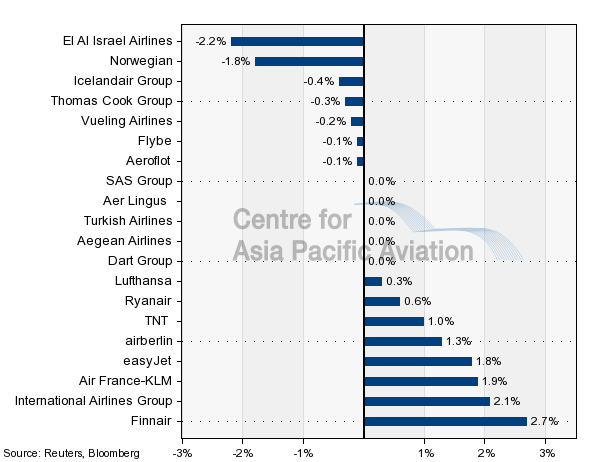