Shares in Air France-KLM fell by 0.3% yesterday, with the release of the carrier’s financial results for the three months and six months ended 30-Sep-2009 and a wider than expected loss in its peak second quarter period.

During the quarter, Air France-KLM generated an operating loss of EUR47 million, compared to a profit of EUR391 million in the previous corresponding period. This comes despite a 17.4% reduction in external costs.

The quarter’s results added to half-year losses, which reached EUR543 million at the operating level for the six months ended 30-Sep-2009. Air France-KLM’s positive EBITDAR of EUR667 million for the six month period was still down 63.5% year-on-year.

Air France-KLM CEO, Pierre-Henri Gourgeon, stated the group's performance improved in the second quarter, compared with the "deep losses" it experienced in 1QFY2010. He expects the carrier will return to operating break-even, excluding the impact of the pre-2009 fuel hedges, by the beginning of the next financial year. Mr Gourgeon added, “the situation remains uncertain, and competition is fierce, but we want to play our trump cards”.

Air France-KLM plans to eliminate 1,700 jobs over the course of 2010, with Air France carrier planning to implement a "voluntary redundancy programme" at its airline in order to make most, if not all, of the reductions. By Mar-2010, Air France expects to have 105,735 ground staff, pilots and cabin crew, down from 112,640 two years earlier. The airline aims for a further 3-5% in job reductions by 31-Mar-2011. See separate report: Air France/KLM article

Shares in Lufthansa jumped 0.4% yesterday, as Deputy CEO, Christoph Franz, announced the carrier will remain profitable in 2009. The outlook for the carrier is improving but "remains subject to very considerable risks". Mr Franz added, “we are able to sell enough tickets but we are not in a position to raise prices. And frankly, I do not see any trend towards a sustainable improvement”.

The German carrier plans to adopt some low cost elements into its model, particularly on its European routes, according to Mr Franz. Among the measures under consideration are changes to economy class seating, as well as catering policy. However, F&B will still be free, with Mr Franz stating, charging for such services "does not work with a premium brand". 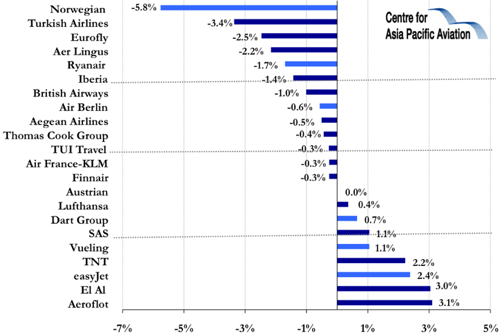