Air France-KLM (-1.0%) shares were down after the group reported a 2.2% decline in passenger numbers for Feb-2010, to 4.8 million, led by a decline in passengers on European and Caribbean/Indian Ocean services. The carrier attributed the decline to adverse weather conditions and the four-day strike by French air traffic controllers. However, load factor for the group rose 3.5 ppts, to 77.7%, following significant capacity adjustments over the past year (which have also weighed on revenues).

British Airways (-1.8%) was also down ahead of the end to its negotiations with cabin crew union, Unite, on 09-Mar-2010. Unite Assistant General Secretary, Len McCluskey, stated he remains positive of results of the negotiations, but the outcome is a “toss of a coin”.

Aer Lingus (-1.6%) announced it will defer the release of its preliminary results for the 12 months ended 31-Dec-2009 beyond 10-Mar-2010, due to a revision in restructuring costs following an agreement with union representatives on the carrier’s proposed EUR97 million cost saving programme.

Aer Lingus will provide a brief trading update and the revised announcement date for its FY2009 results on 10-Mar-2010.

Vueling (+4.3%) was one of the day’s biggest gainers after Iberia (-2.0%) stated its proposed short-haul subsidiary (to be launched in Nov-2010) would not be an LCC, offer a Business class and operate a fleet of 14 aircraft, employing approximately 350 new staff. Unions, led by the cabin crew staff, have expressed concern about the new operation.

More on the European aviation market can be found in Europe Airline Daily. Other stories featured in today’s issue include: 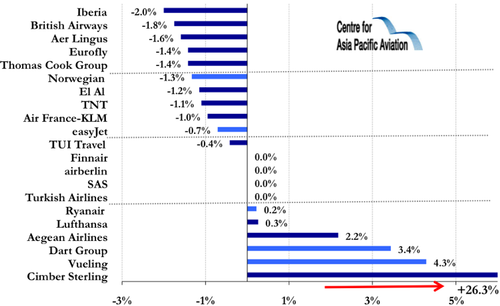