Air France-KLM successfully launched a EUR700 million offering of seven-year bonds yesterday. Shares in the carrier were down 0.8%, going against a broad rally across global stock markets.

The carrier stated that the level of interest from investors enabled the size of the offering to be increased from the initially planned EUR500 million to EUR700 million. The bonds have a par value of EUR50,000 and bear an annual interest rate of 6.75%. They were priced at 99.323% of par value and will be redeemed at par in Oct-2016. Air France and KLM guarantee the offering. The issue was lead-managed by BNP PARIBAS Corporate & Investment Banking, Calyon, Natixis, Société Générale Corporate & Investment Banking and HSBC as Joint Lead Managers and Joint Book Runners.

In fleets news, Air France-KLM may consider deferring delivery of some A380 and B777 passenger and cargo aircraft as it faces the prospect of “heavy” operating losses in the current financial year, according to a report in La Tribune. The carrier responded that it has no current plans to cancel any aircraft orders.

Shares in British Airways gained 2.4% yesterday. The carrier and its cabin crew unions resumed negotiations over job cuts and salary freezes. Unions have claimed the carrier is planning to announce another 1,300 job cuts, in addition to 1,700 voluntary cabin crew redundancies already secured. BA responded, stating the cuts are part of already announced plans to remove 3,700 jobs, in addition to the 2,500 cuts made between Jun-2008 and Mar-2009.

In alliances developments, BA CEO, Willie Walsh, told Dow Jones that if regulators failed to approve the carrier’s proposed trans-Atlantic alliance with American Airlines and Iberia, the Atlantic market could be faced with an "untouchable duopoly", with Star and SkyTeam remaining the only immunised alliances across the Atlantic. 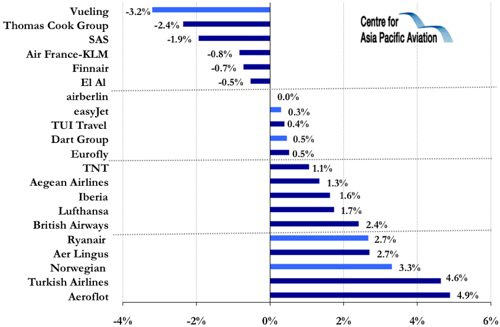