The carrier will cut long-haul capacity by 1.8% and medium-haul capacity by 2.9%. French domestic capacity will be cut by 3.2%. It will also introduce a new class, 'Premium Voyageur' on all Air France’s long-haul aircraft by the end of 2010, except for aircraft servicing the Caribbean and Indian Ocean network. The arrival of the carrier's first three A380s during the period will enable a reduction in the number of frequencies to New York, Dubai and Johannesburg, while maintaining seat capacity levels. It will also optimise trans-Atlantic services, in the context of the JV between Air France-KLM and Delta Air Lines.

Elsewhere, Aer Lingus, which is also restructuring its route network, is considering plans to transfer its long-haul operations to a third party, as part of initiatives to address mounting losses in long-haul markets. The carrier is also considering introducing a “Premium Economy” section on its trans-Atlantic routes. Aer Lingus' shares gained 2.3% yesterday. 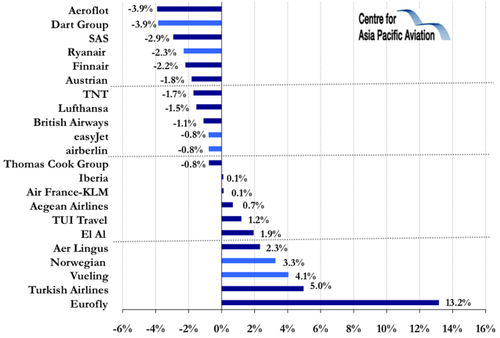