European airline shares made gains on Friday (17-Sep-2010), shrugging off declines in the wider market on a fall in US consumer sentiment. Airline shares rose as oil prices declined (-1.9%) to USD74.57, ending their recent surge.

Air France-KLM (+2.0%) was one of the day’s biggest gainers. Following trading on Friday, the carrier confirmed it is in the process of deciding whether to end passenger operations at Dutch subsidiary, Martinair. The carrier is also taking measures to reduce losses at low-cost and charter unit, Transavia.

Iberia and British Airways may just seek cooperation or partnerships

Iberia (+1.2%) and British Airways (+0.7%) were also up after Iberia Chairman and CEO, Antonio Vazquez Romero, stated International Airline Group (IAG), the company to be formed through the carrier’s merger with BA, may not seek takeovers of other carriers once the merger is complete. The company may pursue cooperation or partnerships with other carriers instead of outright acquisitions. British Airways CEO, Willie Walsh, stated in early Sep-2010 that 12 potential targets had been identified by IAG.

Also during trading, Lufthansa (+0.9%) announced a target of an operating margin of 8% in its core passenger transportation business. The carrier believes it can only invest in capacity and take part in growth if its main passenger business becomes more profitable.

SAS Scandinavian Airlines was flat for the day, after the carrier reached an agreement with the Estonian Government that will result in SAS divesting its 49% stake in Estonian Air. The Estonian Government will provide approximately EUR21.6 million in a new rights issue and SAS will convert approximately SEK20 in loans into equity. After the rights issue the Estonian State will hold 90% and SAS 10% of Estonian Air. SAS will remain lender of approximately EUR7.6 million in loans with a maturity in 2014. Estonian Air has an option to buy SAS remaining stake and SAS has the option to sell its stake at fair market value after four years. The transaction will take effect automatically after the Estonian parliament has approved a change in its 2010 state budget whereby the state channels into the budget of the area of government of the Ministry of Economy and Communications EUR18 million for increasing the share capital of Estonian Air. 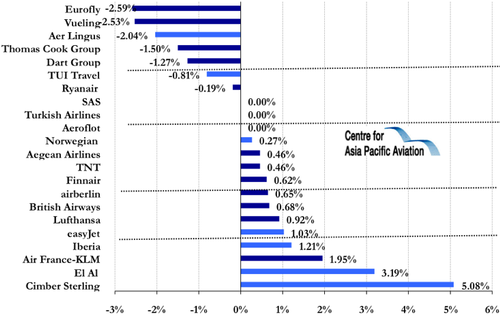