Air France-KLM (+1.5%) rose for a second consecutive day after Deutsche Bank AG upgraded its rating of the airline group’s shares from "hold" to "buy", stating its “trans-Atlantic JV with Delta is under-appreciated by the market”. The gain was despite a 0.3% decline in France’s CAC for the day.

The group stated during trading that it plans to increase capacity (ASMs) by 3.3% for its winter 2010/2011 schedule, compared with the previous corresponding period. The carrier plans to expand long-haul capacity by 4.1% and medium-haul 0.5%.

British Airways (+1.0%) and Iberia (+0.5%) made some ground after a bullish Goldman Sachs note. The analysts stated stronger than expected trading over summer 2010-11 would be reflected in its next financial results.

The analysts stated: “BA and Iberia are merging which we believe will produce synergies, but more interesting, in our view, is the joint venture between BA, Iberia and American which should lead to tighter premium yields across the North Atlantic as corporate deals and discounts are renegotiated.”

BA gains were softened by Societe Generale downgraded its rating of the carrier from "buy" to "hold". 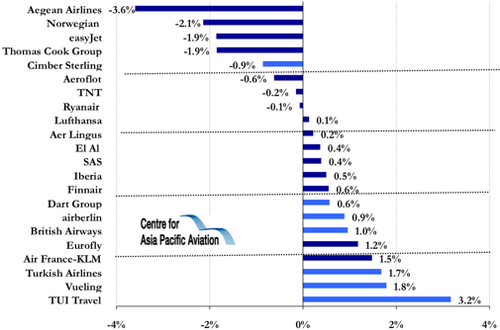