Shares in Air France-KLM and airberlin both gained 0.8% as the carriers revealed healthy traffic results for Oct-2010.

Despite the disruption caused by repeated air traffic control strikes in France, Air France-KLM’s passenger and cargo activities maintained the positive trend seen over the past few months, with a further rise in traffic and load factors and a “marked improvement” in unit revenues last month.

Passenger traffic (RPKs) increased by 3.1% year-on-year in Oct-2010 on a slight increase in capacity (+1.0%), leading to a 1.7 point rise in load factor to a “very high” 84.2%. The carrier noted that unit revenue per available seat kilometre (RASK) excluding currency was “up strongly” compared with Oct-2009, with “dynamic” performances in economy and premium classes.

The group recently published its schedule for winter 2010-11, with a moderate (+3.3%) increase in capacity, driven by targeted increases in long-haul (+4.1%) and virtually unchanged medium-haul capacity (+0.5%). 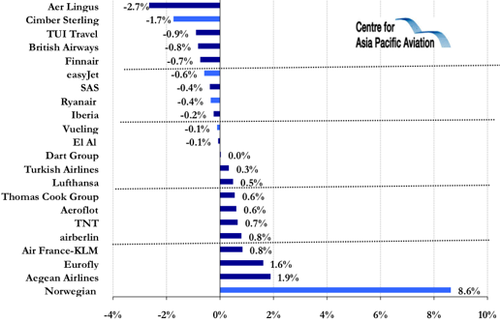