Air France-KLM: a new strategic plan awaits as 2Q marks another step on the recovery path

Air France-KLM's recovery continued with another year on year improvement in quarterly results in 2Q2014, mainly because it cut unit costs more quickly than the fall in unit revenues. Following its early Jul-2014 profit warning, it has made no further changes to its FY2014 EBITDA target, which remains EUR2.2-2.3 billion, and it continues to target net debt of EUR4.5 billion at the end of 2015 (versus EUR5.4 billion at the end of Jun-2014).

On the strategic front, Air France-KLM is accelerating the growth of its Transavia LCC subsidiary, although this unit is still loss-making, and is re-grouping its Air France point to point and Hop regional operations into a single business unit. In addition, it is examining further reductions to its full-freighter fleet, beyond those previously announced.

Air France-KLM is also working on its next five year strategic plan, to follow its Transform 2015 restructuring plan. To be unveiled in Sep-2014, the "Perform 2020" plan will focus on growth and competitiveness.

Air France-KLM reported a narrowing of 2Q2014 and 1H2014 net losses. For 2Q, the net loss was reduced from EUR158 million last year to EUR6 million this year. This result was adversely affected by a EUR106 million impairment of assets in the cargo segment and by other non-operating items. The Group calculates its adjusted net result to be up from a loss of EUR34 million to a profit of EUR143 million.

Currency movements depressed both costs and revenues, but had a net negative impact on the operating result. 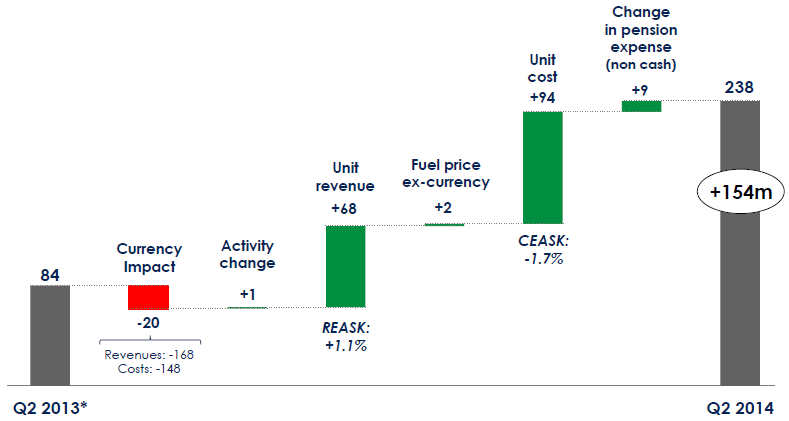 In terms of business segments, the key driver of the improved 2Q group operating result was the passenger segment, whose result improved by EUR159 million to EUR255 million.

The cargo segment remained in losses, with an operating result of minus EUR45 million, although this was EUR5 million better than 2Q2013. The maintenance segment's operating profit fell by EUR7 million to EUR30 million, reflecting USD weakness and what the company called "one-off items". 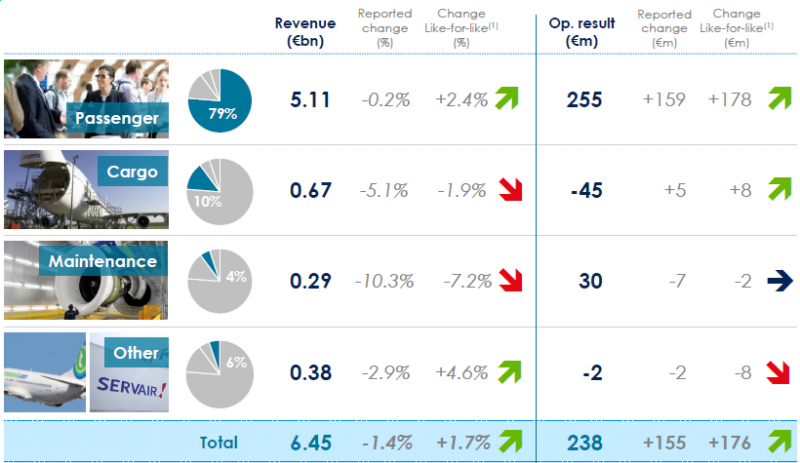 The passenger business increased its ASK capacity by 1.0% in 2Q2014 and achieved a 1.5ppt load factor gain to 84.8%. Its 1H load factor of 83.8% (+1.0 ppt) compares favourably with the average for the Association of European Airlines of around 79% for the period. 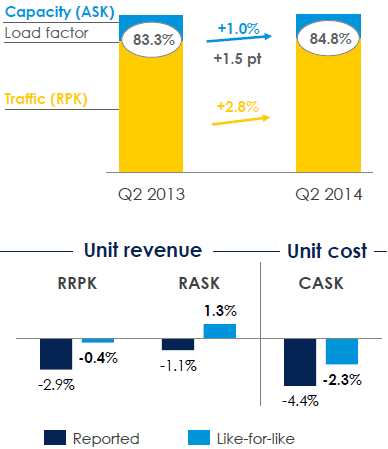 Like-for-like RASK growth of 1.3%, but varies by region 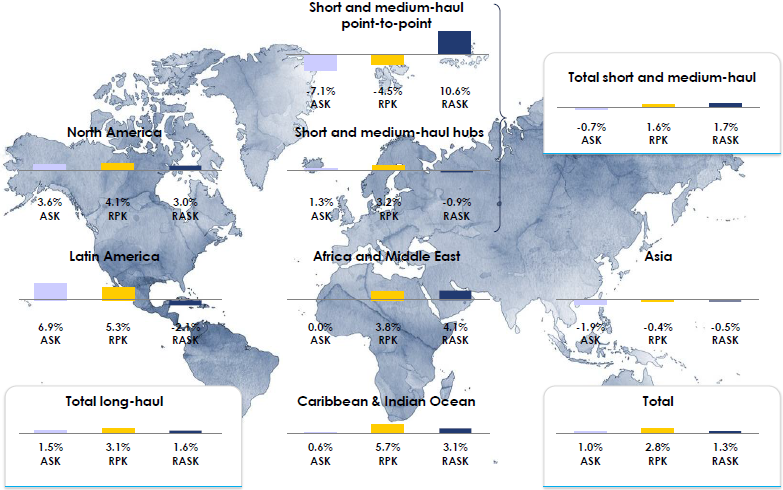 Transavia ASKs up 4.8% in 2Q, but operating loss widens

Transavia is not included in the group's passenger segment, but is grouped with catering in the 'Other' segment. The group's leisure LCC grew its ASKs by 4.8% in 2Q, with Transavia France growing by 10% and Transavia Netherlands by 3%.

Transavia France is growing more rapidly than its Dutch counterpart, as Air France-KLM increases its use as a competitive response to other LCCs. It is making use of slots freed up at Paris Orly by Air France's capacity reduction on its point to point network. Transavia Netherlands is accelerating its strategic change from mainly relying on charter traffic with tour operators to a scheduled LCC model.

Transavia's load factor gained 0.9 ppts to a very creditable level of 90.7%, putting it in the same bracket as easyJet at the top of the European airline industry in load factor. However, this was achieved at the cost of lower yield (revenue per RPK fell 2.8%) and Transavia's unit revenue (RASK) fell by 1.7%. Its unit cost (CASK) fell by 0.8% (up 0.9% at constant currency) and its operating loss widened by EUR3 million year on year to EUR6 million in 3Q2014.

Air France-KLM CEO Alexandre de Juniac said that the French arm of Transavia was close to breakeven, but that the Dutch operation's results had deteriorated this year due to the shift in its business model. It has a target to lower its CASK by around 10%. 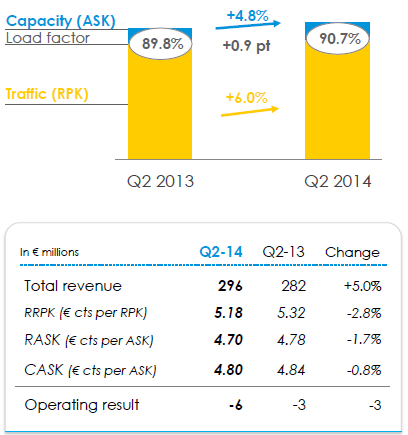 Transavia's growth is to accelerate; scope clause seeks to slow it

Transavia France is opening 19 new routes in summer 2014 and its capacity growth will accelerate to 30% in 2H. Mr Riolacci told analysts that it is achieving a load factor of more than 85% on newly opened routes in 2Q.

Mr de Juniac said that medium term growth for Transavia would likely be greater than 10% pa. He presented a fleet plan for Transavia that shows an increased level of growth is now planned compared with the Group's presentation in Oct-2013. At that time, the Transavia fleet was planned to increase from 41 in summer 2013 (30 for Transavia Netherlands and 11 for Transavia France) to 56 in summer 2016 (30 and 26 respectively).

The 3Q2014 results presentation indicates that the Transavia fleet will grow to 64 aircraft in summer 2016 (35 in the Netherlands and 29 in France). However, the two presentations are not directly comparable, since the more recent one includes additional leased summer capacity and has summer 2013 figures of 34 aircraft and 14 aircraft for the Netherlands and France respectively. If Transavia is to exceed 10% annual growth in the medium term, it will probably need to add even more to this fleet plan.

A factor that has limited the growth of Transavia is a scope clause in Air France-KLM's agreement with its French pilots that restricts the number of aircraft. Mr de Juniac told analysts that negotiations aimed at increasing the scope clause limit are to start soon.

"They have demonstrated an ability to negotiate cleverly," Mr De Juniac said, "But also in the interests of the company." 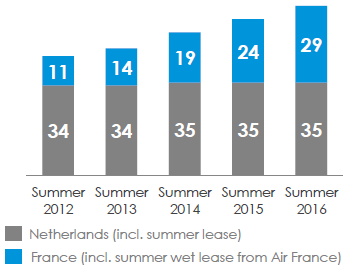 Air France-KLM had already decided to reduce its full freighter fleet to 2 in Paris and 8 in Amsterdam by 2015 (from 5 and 13 respectively at the end of Jun-2014) and has now decided to make further reductions in Amsterdam.

It is considering whether to do this through third party partnership or internal restructuring or disposal. As a result of the group's decision to reduce its use of full freighters, it recorded a EUR106 million impairment charges in 2Q. 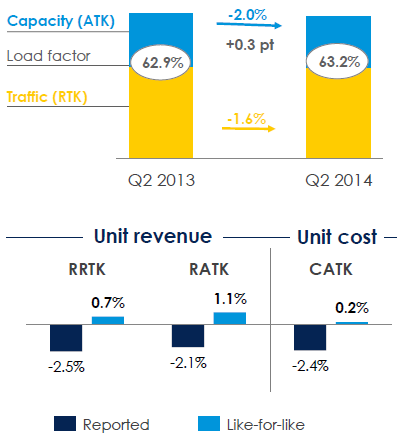 Air France-KLM's Transform 2015 restructuring plan has had some success, particularly with achieving its unit cost reduction targets. The Group has achieved year on year unit cost reduction every quarter since 2Q2012, typically of close to 2%, according to its 2Q2014 results presentation. 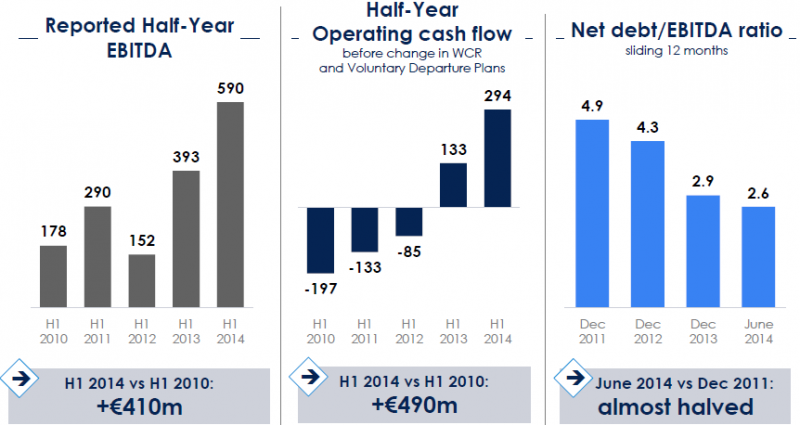 Under Transform 2015, the Group it has restructured its short and medium haul network, growing its leisure LCC Transavia and reducing the narrow body fleet of both Air France and KLM. It has also integrated its French regional operations through the creation of Hop, which itself has also seen a reduction in its fleet.

Mr de Juniac said that the point to point operations of Air France on short haul will now be more closely integrated with Hop by the creation of a single business unit, albeit with two brands continuing to operate. Air France operates on bigger routes, while Hop flies regional routes.

The cargo segment has remained stubbornly difficult to fix. The initial Transform 2015 measures were supplemented by additional measures in Oct-2013. It more than halved its full freighter capacity from 9.1 billion ATKs in 2008/09 to 4.5 billion ATKs in 2013. Its share of the group's total cargo capacity fell from 53% to 28% over this period as bellyhold freight grew.

The Group is now investigating further scenarios in order to minimise its exposure to full freighter activity. It expects to have more details in time for its Capital Markets Day on 11-Sep-2014. 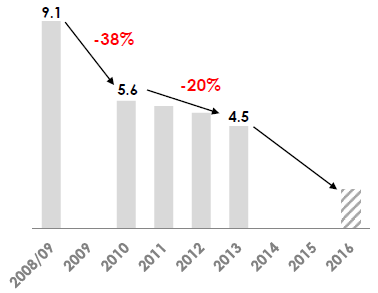 From Transform to Perform, in "the race of giants"

Air France-KLM's Capital Markets Day in Sep-2014 will present details of its next five-year strategic plan, to take the Group forward from its three-year Transform 2015 plan.

Mr de Juniac told analysts that the two key words for the new plan, to be called "Perform 2020", will be growth and competitiveness. He argued that there are growth opportunities in the industry and that growth was necessary, because "size matters" in a "race of giants".

However, Mr de Juniac added that the company must be competitive and de-risk its business as a pre-condition for growth. Moreover, growth would not compromise the Group's financial structure. "We will not target growth at any cost", he said.

Unanswered questions to be addressed in Sep-2014?

Although 2015 capacity growth plans have not yet been announced, Mr de Juniac said that Air France-KLM would remain cautious. His comments on growth and competitiveness are certainly welcome if they translate into control over capacity and costs.

The accelerated growth of Transavia is also welcome, although this should be pushed even further, given its low cost base. Most of its growth is coming from adding new routes, rather than from, more controversially, taking over routes from higher cost Air France. The creation of a single business unit to integrate Air France point to point and Hop seems sensible, but the dual branding is confusing.

On long haul, the product upgrades commenced by the Group are a necessary condition for remaining in the game and Mr de Juniac is rightly anxious to protect and enhance his global brands Air France and KLM. However, this does not fully combat the threat from lower cost competitors with products that are at least as good, or often better (ie Gulf carriers and certain Asian airlines), although Air France-KLM's codeshare with Etihad should help.

Moreover, the long haul low cost model is becoming well established in Asia and has taken a foothold in Europe in the form of Norwegian, not to mention Lufthansa's recent indication that it plans to establish a low cost long haul unit. This long-haul low cost entry means that price, and therefore unit cost, will become increasingly important on long haul over time.

"Perform 2015" will need to address these issues, in addition to the problems of the cargo sector, while ensuring that Air France-KLM can carry its employees harmoniously in the same direction and deliver sustainable value creating returns to investors.

The Investor Day on 11-Sep-2014 promises to be an interesting one.