Air France-KLM 3Q operating profit tumbles due to pilot strike, but underlying trend is also down

The fall in Air France-KLM's 3Q2014 operating profit more than offset improvements recorded in 1H2014. This deterioration in 3Q2014 was largely as a result of the 14 day pilot strike in Sep-2014, which hit the operating result by EUR330 million. Nevertheless, even without the strike effect, unit revenue weakness weighed on the underlying performance of the group and lowered the like for like operating result.

Air France-KLM expects passenger capacity growth in long-haul markets from Europe to slow a little from 6.3% in 3Q2014 to 5.5% in 4Q2014. It plans to keep its own passenger capacity flat, with significant cuts in point to point capacity, but these price pressures look unlikely to dissipate quickly.

The company says that its Transform 2015 programme, which mainly focused on cost and debt reduction, is on track and it is already implementing key initiatives under its new Perform 2020 plan. The ratification by pilot union membership of the recent draft agreement over the growth of Transavia would provide an important psychological boost.

In 3Q2014, the Air France-KLM Group's net result fell by EUR48 million year on year, or 32%, to EUR100 million. This result includes some significant non-operating items, in particular a EUR187 million gain from the partial sale of the group's interest in Amadeus and a negative EUR172 million change in the value of fuel hedging derivative contracts, and a reduction in the effective tax rate.

The operating result, which gives a closer view of the trend in underling profitability, fell by EUR394 million, or 62%, to EUR247 million. Revenues fell by 6.7% to EUR6,695 million. The 9M2014 operating result was down by 79% to EUR40 million, as the deterioration in the 3Q2014 result was sufficient to reverse the improvement seen in 1H2014.

Even before the impact of the pilot strike in Sep-2014, Air France-KLM estimates that the underlying operating result deteriorated year on year by EUR64 million in 3Q2014. This was the result of unit revenue weakness in its markets (EUR130 million impact) and adverse currency movements (EUR47 million impact), partially offset by other factors, of which the most significant was unit cost reduction (positive impact on the operating result of EUR73 million).

Of course, the impact of the weak market environment was multiplied substantially by the damaging effect of the pilot strike, which hit the 3Q2014 operating result by EUR330 million, according to Air France-KLM. 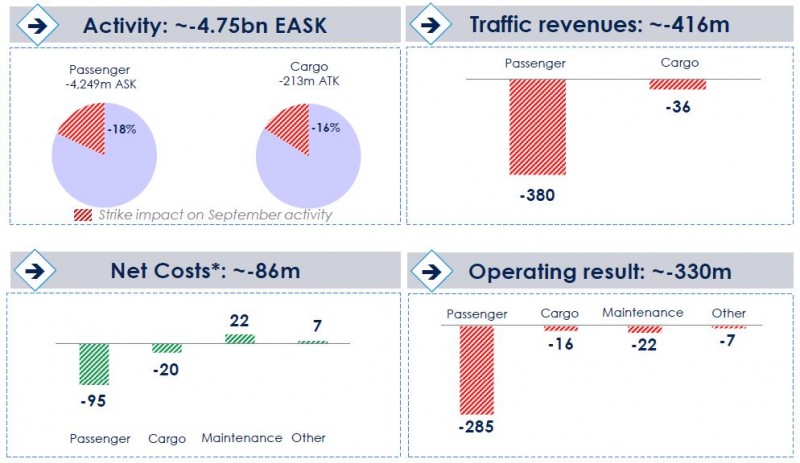 Without the strike or currency movements, Air France-KLM's 3Q2014 revenues would have been just above flat (+0.2%) and its operating result would have been EUR18 million below that reported for the same period a year earlier.

Passenger segment most affected by the strike

This like for like deterioration was principally due to the passenger segment, which remains the biggest driver of group profitability and accounted for 78% of revenues in 3Q2014. Its like for like operating result was down by EUR40 million, while its reported operating result fell by EUR373 million as it was the most heavily affected by the strike. This result, in what is typically the strongest quarter of the year for the passenger business, dealt a body blow to the group's chances of achieving its previous full year profit target.

The cargo segment only accounted for 9% of revenues, but its EUR102 million operating loss weighed on the group result. This loss was EUR18 million worse than last year (EUR2 million worse on a like for like basis), highlighting the ongoing weakness of demand in air cargo markets and the structural overcapacity that characterises this business.

The maintenance segment managed to report an improved operating result for 3Q2014, up EUR7 million to EUR61 million (a EUR27 million improvement on a like for like basis). The segment is benefiting from the growth of higher margin activities, although the strike affected its intra-group activity in the quarter.

The 'other' segment reported an operating result of EUR77 million, down EUR10 million on a year earlier (down EUR5 million on a like for like basis). This segment mainly comprises LCC Transavia (see also below) and catering company Servair. 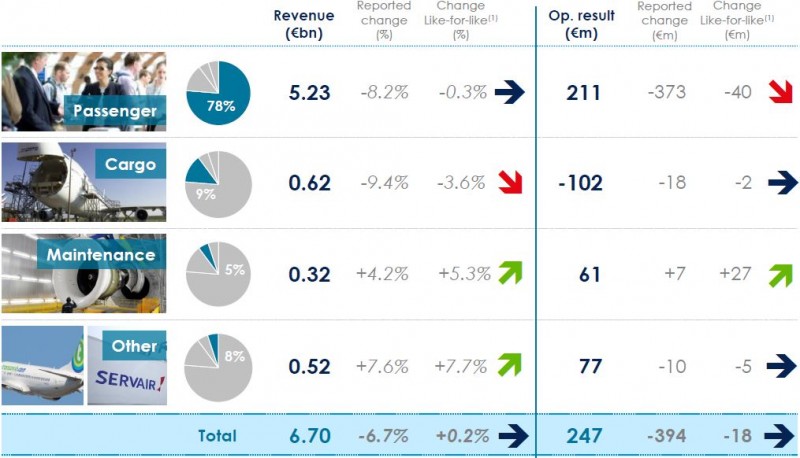 Excluding the strike and adverse currency movements, Air France-KLM says that like for like 3Q RASK would have been down by only 1.8%, but this still highlights a weak pricing environment. This was particularly noticeable in Sep-2014, when like for like RASK fell by 3.7%. Long-haul like for like RASK was down 1.3% in 3Q, with a 2.2% gain in long-haul premium more than offset by a 2.5% fall in long-haul economy RASK. 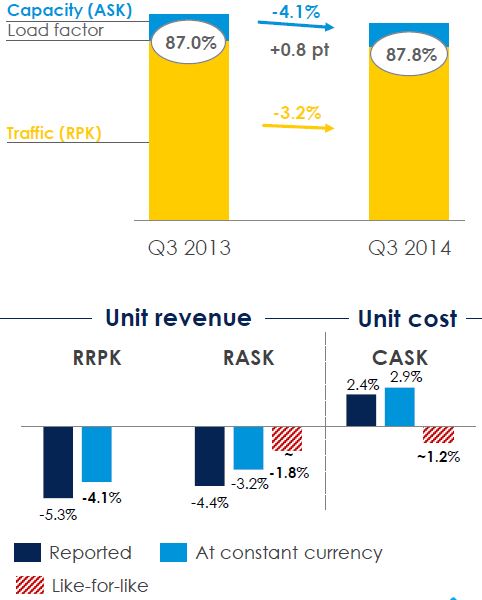 Air France-KLM's analysis of like for like passenger unit revenue development by region shows the weakest RASK performance on the Latin America network, where it fell by 10.4%. This region also had the highest rate of ASK growth for the group, up 7.1%.

RASK was also weak in Asia, where it fell 2.3% for a 2.0% ASK increase, and North America (RASK-1.3%, ASK up 4.1%). Air France-KLM CFO Pierre-Francois Riolacci, speaking to analysts on a conference call to discuss the 3Q2014 results, said that overcapacity was a factor in Asia, especially South and Southeast Asia, where Gulf carrier competition also had an impact on unit revenues.

Capacity growth in Asia could be adjusted next summer as part of the group's network management processes, according to Mr Riolacci. Although "there are certain routes we are expected to provide", he said that the medium term long-haul growth rate target of 2% did not necessarily have to be met every year. 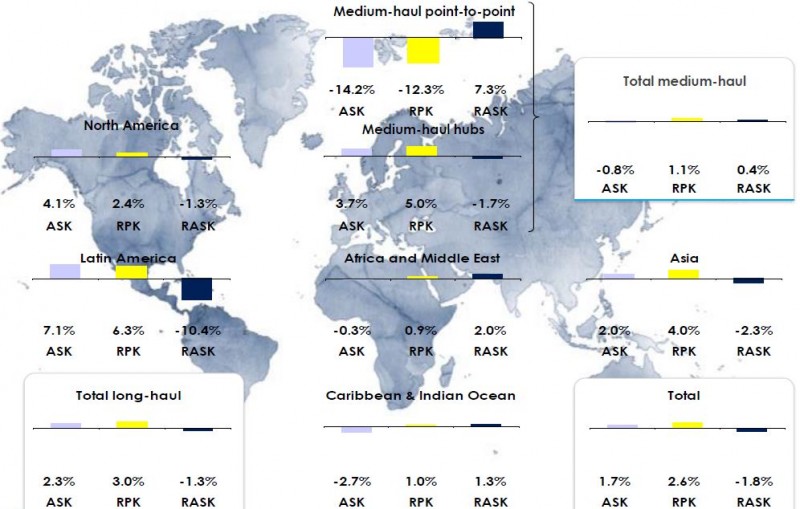 The capacity growth was driven by Transavia France, whose ASKs were up by 21% and where load factor was above 87%. This continues Air France-KLM's strategy of growing Transavia France, while the group's mainline medium-haul point to point business continues to cut capacity (see above), although there is no direct transfer of capacity from one to the other.

In Transavia's Netherlands arm, the process of moving from a charter model to a scheduled LCC continues. Scheduled capacity here was up 15.3% in 3Q2014, while charter capacity was cut by 3.7%. In Transavia as a whole, RASK fell by 0.6%, but CASK fell by only 0.2%, so that the 3Q2014 operating result fell by EUR4 million to EUR62 million.

Transavia's 9M2014 operating result was a loss of EUR2 million, versus a profit of EUR12 million a year earlier. Air France-KLM attributes the deterioration in its profits to "the rapid ramp up in France".

Transavia France will grow ASKs by 56% this coming winter, with Transavia overall growing its capacity by 13%. As indicated at Air France-KLM's investor day, Transavia looks set for a second successive full year decline in operating result in 2014. Its results are expected to start to improve only after 2015. 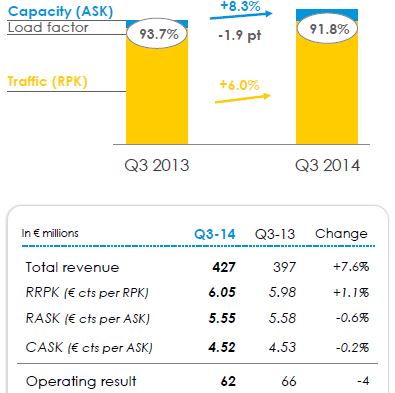 Capacity in the cargo segment was down by 5.6% in 3Q2014 (mostly due to the strike; it fell by only 0.5% like for like) and cargo load factor fell by 0.6ppts to 59.8%. The underlying cargo capacity reduction was driven by a reduction in full freighter capacity.

Cargo unit revenue (RATK) fell by 3.5%, or by 2.1% on a like for like basis, reflecting weak demand. Air France-KLM is implementing its earlier decision to cut its full freighter fleet from 14 aircraft in 2013 to just five by the end of 2016. 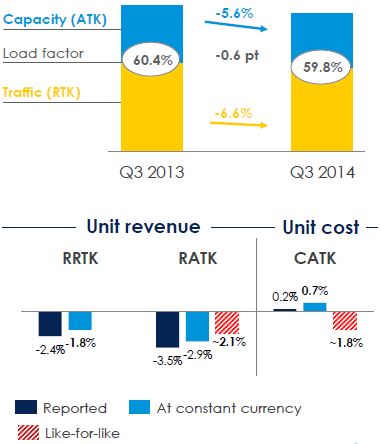 The group's 3Q2014 reported operating costs were 1.3% lower year on year, less than the reported fall in revenues and less than the drop in capacity. Fuel costs fell by 6.4% and non-fuel costs increased by 0.7%. 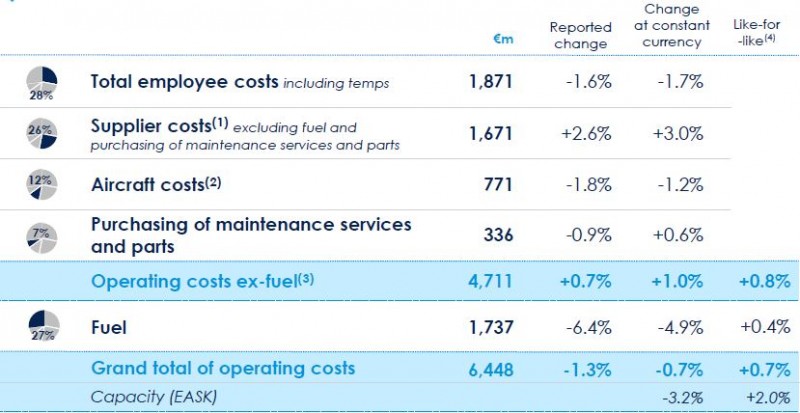 Labour expenses, which are Air France-KLM's biggest cost, were reduced by 1.6%, broadly in line with the reduction in headcount. Employee cost reductions are likely to continue into 1H2015, according to Mr Riolacci.

Speaking about the company's relationship with its unions in the aftermath of the recent pilot strike, Mr Riolacci told analysts that Air France-KLM needed to "overcome the consequences of conflict" and to explain what it hoped to achieve with its Perform 2020 industrial plan.

The draft agreement reached with pilot union representatives over Transavia showed "good progress", but needs ratification by union members. "Signing this agreement would be a good sign," Mr Riolacci said.

This is expected in early Nov-2014. Reaching a ratified deal with the unions would help Air France-KLM to draw a line under this difficult episode in its industrial relations history and allow it to focus on discussing with all labour groups the implementation of Perform 2020.

At the start of this year, Air France-KLM was aiming for 2014 EBITDA of EUR2.5 billion. This was lowered to a range of between EUR2.2 billion and EUR2.3 billion in Jul-2014 as a result of weakening market conditions.

More recently, on 8-Oct-2014, the pilot strike and further demand weakness caused Air France-KLM to estimate that its 2014 EBITDA could be adversely affected by as much as EUR500 million. It has not changed this outlook with its 3Q2014 results publication.

This suggests in a 2014 EBITDA figure in the range of EUR1.7 billion to EUR1.8 billion, less than the EUR1.9 billion reported in 2013 and only EUR300 million to EUR400 million more than the EUR1.4 billion reported in 2012. By contrast, IAG (which is smaller in revenue terms) improved its EBITDA by around EUR800 million in 2013 and expects to improve by a further EUR500 million or more in 2014 (according to its latest guidance, issued in Jul-2014).

Mr Riolacci estimated that the negative impact of the strike on the group's net debt was around EUR400 million, a little less than the impact on EBITDA (presumably because investment has been trimmed). Reduction in indebtedness remains a key aim of Air France-KLM, whose Perform 2020 plan includes a 2017 target to reduce adjusted net debt to EBITDAR to below 2.5 times from 5.4 times at the end of 2012 and 4.2 times at the end of 2013.

At 30-Sep-2014, this ratio stood at 4.4 times, the same level as a year earlier, but would have fallen to 4.0 times without the strike. There is still time for Air France-KLM to reach its 2017 target, but it will require continued strong discipline over costs and, as Mr Riolacci admitted, a possible reduction in the group's capital expenditure plans. 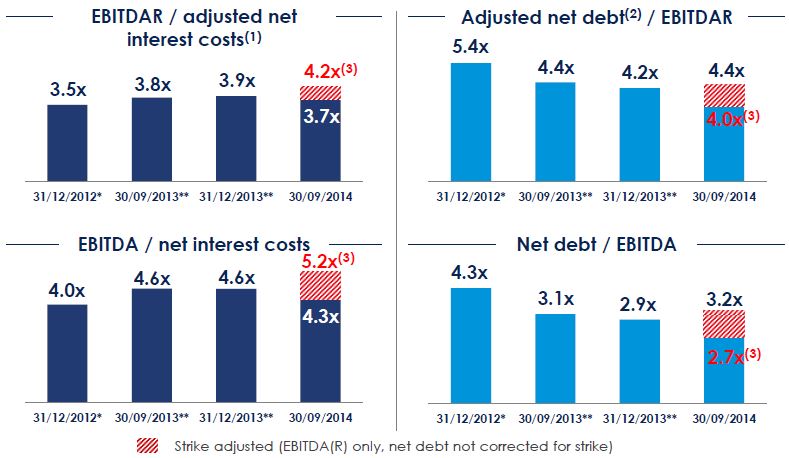 The group's book equity fell into negative territory at the end of Sep-2014 (minus EUR251 million from a positive balance of EUR2.3 billion). Although there are no immediate practical consequences of crossing this accounting line in the sand, it adds to the impression of a company whose finances are struggling to regain the successes of the years after the merger of its two main operating companies and before the global recession.