easyJet shares gained 2.8% yesterday, coinciding with Deutsche Bank commentary that stated the outlook for airlines such as Ryanair and easyJet is more positive than other European carriers.

Deutsche Bank analyst, Geoff van Klaveren, said: "In the absence of a sharp improvement in the economic outlook we believe that the recovery in demand for European network airlines could run out of steam towards the end of the year. The problem could be compounded by a significant increase in capacity on long-haul routes this coming winter. In such a weak economic growth environment we have a preference for airlines such as Ryanair and easyJet that can grow earnings by taking market share due to inherent competitive advantages."

Ryanair may close some German routes due to new tax

Ryanair (-1.4%) stated it may close some of its routes in Germany due to a new departure tax to be introduced by the German Government. Spokesman Stephen McNamara stated: "We will have to review all of our routes, and it is likely that these taxes will lead to a decline in passenger numbers."

Ryanair operates 174 routes from its three German hubs in Frankfurt, Dusseldorf and Bremen, handling approximately 11 million passengers to/from Germany p/a. The LCC has appealed the decision to the German Parliament, with the carrier intending to lobby for change through the European Low Fares Airline Association. Air Berlin and Lufthansa have also expressed strong opposition to the tax.

Meanwhile, in an interview with Bloomberg, Ryanair CEO Michael O’Leary again said he hopes that, in the future, all of the company’s revenues will come from ancillary revenue sources (up from approximately 20% of total revenues at present), meaning that passenger would fly for free.

In other Ryanair news, Swedish Consumer Agency (Konsumentverket) stated Ryanair and Norwegian Air Shuttle (+1.9%)  are exempt from new Swedish regulations (which came into effect on 01-Aug-2010) preventing carriers from charging fees to customers who purchase airfares with debit or credit cards, as their respective head offices are located outside of Sweden.

Meanwhile, The Consumer Agency has reportedly singled out three travel companies, including Wizz Air, which it accuses of continuing to charge bank card fees even after the new rules came into effect.

Wizz Air to open Belgrade base in Apr-2011

In other European LCC news, Air France-KLM is reportedly considering establishing a domestic LCC due to intensified competition from LCCs in the French market. The new airline, reportedly to be named Air France Express, could be established in 2011 with bases in the southern cities of Marseille, Nice and Toulouse if an agreement can be reached with unions. The carrier already operates a low-cost unit in Transavia. 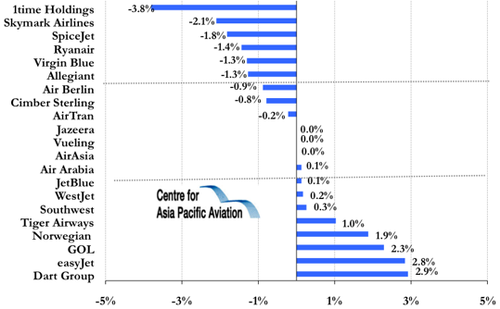