The issue of airline ancillary service charges continues to capture headlines, with Air France announcing on Tuesday that it would begin charging Economy customers USD50 to check a second bag on flights departing the US and EUR50 (USD75) on flights departing Europe for the US, effective 01-Nov-2009.

The fees do not apply to passengers in First or Business class, elite members of its frequent flyer programme and "SkyTeam Elite and Elite Plus" members. Air France is also doubling the fee for first or second bags weighing 50-70 pounds, from USD50 to USD100. Air France-KLM’s shares eased 1.1% yesterday.

Elsewhere, SWISS has responded to British Airways’ moves to drop the free carriage of winter sports equipment, which must now be included in standard baggage allowances, as BA attempts to fill a GBP1 billion reduction in its annual revenue this financial year. CFO, Keith Williams, told Dow Jones that British Airways would post the single largest loss in its history - "more than the GBP401 million pre-tax loss we saw for last year", due to the revenue loss. 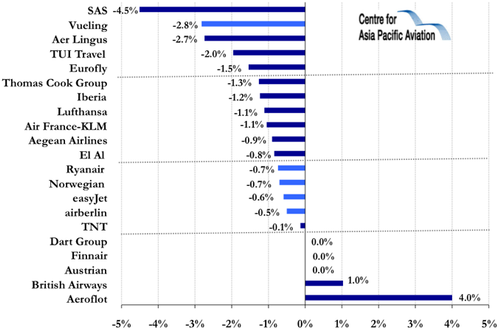