Air France and China Southern sign JV; 'As good as it gets' for British Airways

European airline shares made minor gains on Tuesday (21-Sep-2010), despite a slip in wider markets and another rise in oil prices (+0.2%) to USD74.97, albeit small. Markets declined in afternoon trading as investors became cautious ahead of the US Federal Reserve’s monetary policy meeting.

Air France (+3.3%) gained after signing a JV agreement with China Southern Airlines, effective 01-Nov-2010, based on sharing revenues on operations between the two carriers' hubs, Paris and Guangzhou. Air France and China Southern will have joint governance of the JV. A management committee will be implemented, with five working groups in charge of implementing the JV agreements in the fields of network management, revenue management, sales, products and finance.

'As good as it gets' for British Airways

British Airways (+0.3%) rose only marginally after Charles Stanley initiated coverage of the carrier with a "reduce" rating and a target price of GBP 200 pence. Charles Stanley analyst, Douglas McNeill, stated the carrier’s stock price is “as good as it gets”, based on the carrier’s performance over the past five years, over which it had “two good years, two bad ones, and one veritable cracker”.

Thomas Cook to base fourth aircraft in Newcastle

Thomas Cook Group (-0.5%) slipped for the day. During trading, its airline announced plans to base a fourth aircraft at Newcastle International Airport in summer 2011. As a result, the airline plans to resume Newcastle-Bourgas service, and add frequencies Paphos, Larnaca, Dalaman, Izmir, Mahon, Ibiza, Palma and Tenerife services. The new aircraft will offer approximately 70,000 extra seats throughout the summer season, taking the total number of seats to around 300,000. 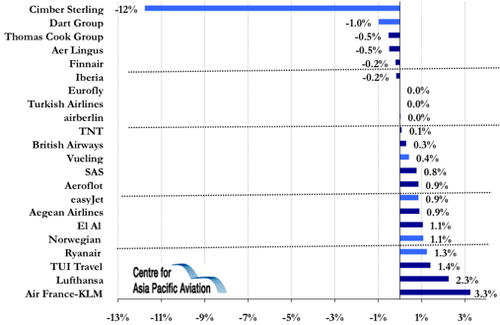