The new codeshare agreement announced this week by Air Europa and Etihad is clearly based on each party gaining access to parts of the other’s network that complement their own. Air Europa will link its Madrid hub to Etihad’s in Abu Dhabi, giving the latter non-stop access to Spain for the first time (albeit via codeshare), but this deal does not seem to be about Europe.

Air Europa’s greatest asset is its Latin American network, where Etihad has only one destination currently. Under the new deal, Etihad will have the widest access to Latin America of the three big Gulf carriers. For its part, Air Europa is currently absent from Asia Pacific and the Middle East, but it will gain better access to these regions through Etihad than its Spanish rival Iberia has through its oneworld partners.

The agreement also casts the spotlight once more on the development of airline alliances. On the surface, this is just another bilateral partnership, but it raises further questions. For example, what does the addition of another codeshare agreement between Etihad and a SkyTeam member mean for that alliance grouping, as the ties grow stronger? How will arch-enemy Delta view its SkyTeam partners' ever-closer friend? And is this new codeshare a precursor to Air Europa’s joining the Etihad ‘Equity Alliance’?

Under the new codeshare, signed on 20-Jan-2014, Air Europa will commence a three times weekly service from Madrid to Abu Dhabi in late 2014, using Airbus A330 aircraft. This Air Europa-operated route will also have Etihad’s code, as will Air Europa’s services to Amsterdam, Barcelona, Brussels, Milan Malpensa and Palma de Mallorca. In return, Air Europa’s code will be placed on Etihad’s services from Abu Dhabi to Amsterdam, Brussels and Milan Malpensa.

Etihad Airways president and CEO James Hogan said in a statement: "The fact that Air Europa has chosen Abu Dhabi for the next wave of its international expansion, speaks volumes of what the emirate and our global hub have to offer. We have been keen to offer our customers direct access to the Spanish capital for a number of years, and doing this now in partnership with Air Europa makes perfect business sense. It is the right thing to do. The new route will support the growing trade volumes between the UAE and Spain, up 75% over the last three years, introduce more Spanish business and leisure travellers to the world class city that is Abu Dhabi, not to mention, make access to Abu Dhabi, Madrid and numerous destinations across our combined networks easier than ever." 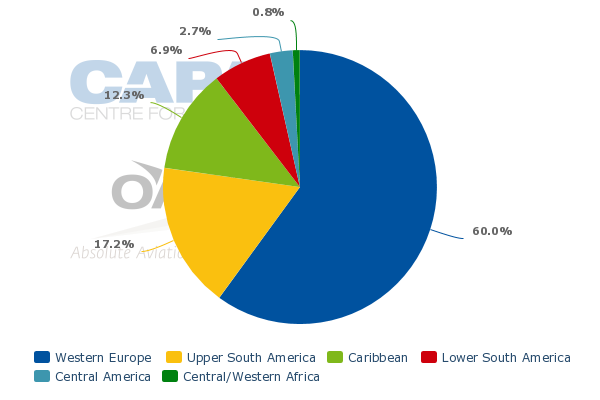 The codeshare will extend to other parts of both networks

The two carriers plan to extend the codeshare in summer 2014 to include additional Air Europa destinations in Spain and, perhaps more significantly for Etihad, in South America. Air Europa will also see its code on Etihad flights to Africa, Asia, Australia and the Gulf. The agreement is subject to regulatory approval.

Air Europa president and CEO Juan José Hidalgo said: "We have chosen Abu Dhabi and Etihad Airways as the gateway to India, China, Australia and other destinations served in the Far East. As one of the most important operators to the American continent, especially Central and South America via our hub in Madrid, for Air Europa the agreement between the two airlines is a step forward in a global market. Both airlines will provide an excellent link between America and Asia via Madrid and Abu Dhabi." 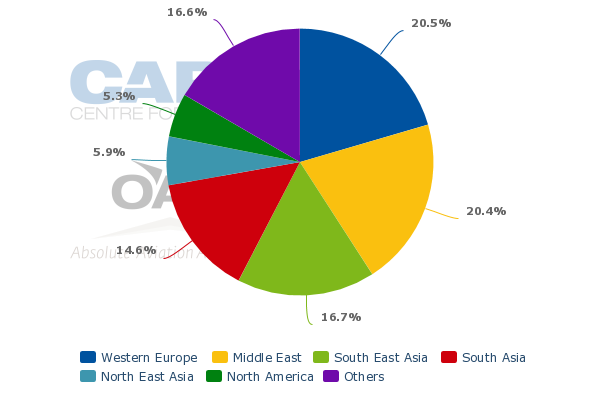 Etihad does not serve Spain, but has good connections in Europe via partners

Out of a total of 78 international passenger destinations, Etihad operates to 34 in Asia Pacific, 17 in Europe, 14 in Middle East, eight in Africa, four in North America and just one in Latin America (source: OAG, as of 26-Jan-2014). It does not serve the Spanish market – the only large Western European market that it does not serve directly – but existing European codeshare partners airberlin, KLM, Brussels Airlines, Alitalia and Air France offer EY-coded flights via their respective hubs.

Nevertheless, of greater strategic importance to Etihad than the non-stop flights to Spain will be the addition of Air Europa’s South American network to its offer. Etihad currently serves only Sao Paulo using its own equipment and has no Latin American codeshare partners.

According to data from OAG for 26-Jan-2014, Air Europa has 12 Latin American destinations in its network (and a further nine in Mexico via its codeshare partner Aeromexico). Its market niche to Latin America is an important strategic asset, especially on routes to the Caribbean, where Iberia is a relatively small player. Moreover, Air Europa has targeted Latin America for further growth.

Although the Emirates/Qantas partnership offers more destinations in the Middle East and Asia Pacific, Etihad/Air Europa will have a bigger presence in Latin America. Qatar Airways’ codeshare with Gol gives it a large indirect footprint in Brazil, but, overall, Etihad’s new deal gives it arguably the biggest presence (through codeshare) among the Gulf Three across Latin America.

Another codeshare for Etihad with a SkyTeam member

Although Etihad’s CEO James Hogan has called the global alliances “fractured” and Etihad is not interested in joining one, it is interesting to note that the Air Europa agreement gives Etihad another codeshare with a SkyTeam member.

Whether deliberate or not, Etihad has more codeshares involving SkyTeam members than members of the other global alliances. At a SkyTeam hub such as Amsterdam, there will be a series of codeshare flights forming a kind of triangular relationship between Etihad, Air Europa and KLM. In this way, Etihad’s influence with individual SkyTeam members, if not necessarily with SkyTeam itself, is growing. Air France, once the Gulf carriers' strongest opponent is increasingly seizing the opportunity to expand the relationship - if for no other reason than if they don't someone else is going to.

Certainly, any fractures that exist within SkyTeam (or the other global alliances) are likely to be further exposed by its members’ growing tendency pragmatically to seek value from an airline previously perceived as a threat and now as an option for strategic development.

Air Europa will leapfrog Iberia and its partners in Africa, Asia Pacific and the Middle East

For its part, Air Europa’s international network outside Europe and Latin America consists only of one destination in Africa (Dakar in Senegal), with no destinations in the Middle East or Asia Pacific. Almost at a stroke, the new agreement will add up to 14 Middle East destinations and 34 Asia Pacific destinations using Etihad’s network under codeshare.

Speaking at a recent joint press conference with airberlin, Etihad CEO James Hogan summarised Etihad’s partnership strategy: “Global reach is beyond the capability of any single airline”. There are three aspects of its strategic approach: organic growth, codeshares and Etihad’s ‘Equity Alliance’.

The agreement with Air Europa further extends the second of these elements, taking Etihad’s number of codeshare partners to 42. It is also bound to raise the question of whether the relationship may evolve to embrace Air Europa in Etihad’s equity alliance, adding to the seven investments already made?

This is not part of the agreement and neither party has suggested that it could be. Nevertheless, Etihad’s recent history of taking stakes in a range of European carriers (airberlin, Aer Lingus, Air Serbia and Darwin Airline/Etihad Regional) makes it reasonable to consider the possibility. Etihad may see this as a way to cement the codeshare relationship and to strengthen the co-operation with Air Europa. Moreover, there appear to be both financial and strategic reasons why Air Europa’s parent company, the privately-owned travel group Globalia, might be open to an equity relationship with Etihad.

Air Europa and Globalia were loss-making in 2012, according to Globalia’s annual report. At the end of 2012, the Globalia group had a cash balance of EUR57 million, equivalent to only one week of revenues. While its balance sheet net debt had fallen to just under half of the book value of its equity, the addition of capitalised operating leases meant that adjusted net debt was more than eight times equity. This brief analysis of Globalia’s balance sheet suggests that the group may be open to an influx of funds. This would give it a comfort cushion and also help it rise on the wave of new access it gains from the Etihad partnership.

In a report in Aug-2013, CAPA concluded that Air Europa was a cost efficient operator, but that its product and network were not strong enough to attract the necessary revenue premium. Etihad has strengths in both of these areas, which could potentially be of benefit to Air Europa if a deeper relationship were to evolve. Moreover, if synergies in areas such as procurement could be developed, thereby further improving Air Europa’s cost efficiency, it might be able to be profitable without a significant revenue uplift.

Whether or not equity involvement is on the cards, this arrangement has strong mutual benefits

Financially and strategically, then, Globalia/Air Europa could potentially benefit from selling an equity stake in the airline to Etihad. However, the case is not clear cut. Globalia’s finances may have improved during 2013 and/or it may prefer to rely on existing investors. In addition, Air Europa may feel that its own network and product development, supplemented by the Etihad codeshare, sufficiently fulfil its strategic aims.

Moreover, Etihad cannot be expected to invest in the equity of every one of its codeshare partners and it is reported currently to be considering an investment in Alitalia. Etihad has a lot of relationships to manage already, whether codeshare, equity, or both, and this presents a not insignificant management challenge.

On balance, it seems more likely that Etihad and Air Europa will focus for now on extracting as much value as possible from the codeshare agreement without adding an equity relationship. There should be plenty of time for that as the relationship deepens.