Start-up Air Côte d’Ivoire is working towards an Oct-2012 launch, having delayed from Jul-2012 due to regulatory and aircraft delays. Initial services will be international, with a regional network eventually due to increase to nine cities in west and east Africa. Domestic services, initially scheduled to commence by end-2012, will now commence in Jan-2013 to eight cities from the carrier's hub at Abidjan, the country's largest city and former capital.

The carrier's network includes destinations that will be operated by sister carriers Air Mali and Air Burkina, which have a common shareholder – the Aga Khan Fund for Economic Development (AKFED) – with Air Côte d’Ivoire. AKFED has a 15% stake in the start-up while Air France has a 20% interest and the Côte d’Ivoire Government the remaining 65%. The carrier is one of many recent start-ups in bustling west Africa.

Air Côte d’Ivoire's first of two A319s arrived in the country last week. The aircraft were formerly operated by Air France's VIP division. While the aircraft are eight years old, Air Côte d’Ivoire director general René Décurey told the Côte d’Ivoire Economie that due to the aircraft primarily being used on long-haul sectors, they had accumulated a low number of cycles.

The A319s will bring considerable operating advantages over the Boeing 737-500s Air Ivoire used prior to its collapse in 2011. A319-sized aircraft are becoming common in the relatively compact west African region (FastJet will also use them while Air Nigeria, prior to its collapse, mainly used 737-300s and Arik Air uses 737s but also CRJs). Other carriers are using regional jets (Fly Africa World with ERJ145s and Starbow with BAe-146s although Starbow has also been seeking to acquire A319s). Regional jets may be more appropriate for the short term but depending on how carriers are able to develop the market, enough demand could be stimulated for A319-sized aircraft to gain favorable economics.

As for the delay, Mr Décurey cited a number of factors including regulatory delay and longer than expected reconfiguration time of the aircraft, which had been in a premium configuration.

Route network will include services from sister carriers

Air Côte d’Ivoire, according to marketing material, is planning a regional network that, in its first phase of an undisclosed period, will cover from Abidjan to nine international destinations, six in west Africa and three in east Africa. The east African points are unconfirmed, but indications suggest they could include Addis Ababa, Ethiopia; Dar es Salaam, Tanzania; Kampala, Uganda; and Nairobi, Kenya. All but Nairobi would represent new destinations for Abidjan. Under AKFED, the carriers are referred to as the Celestair Group and work to reduce costs and gain synergies, such as through a common frequent flyer programme.

Mr Décurey said Air Côte d’Ivoire would partner with two of Celestair Group carriers – Air Mali and Air Burkina (both of which are not on firm ground) – but did not mention the third Celestair carrier, Air Uganda. Air Uganda, however, still flies only within east Africa. 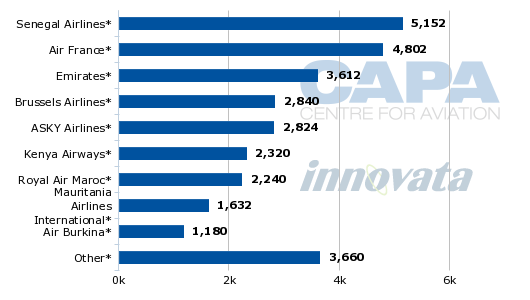 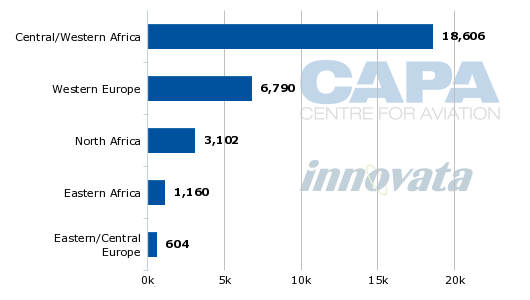 The new carrier, which faces no local competition owing to the 2011 bankruptcy and collapse of former national carrier Air Ivoire, has selected the three largest international routes from the country: Accra, Cotonou and Dakar. The fifth, Bamako, was also pegged but likely to be operated by Air Mali. The four, sixth and seventh largest routes from Abidjan (Casablanca, Lome and Nairobi) were skipped (although Nairobi may be one of the unconfirmed east African destinations).

Casablanca sees service only from Royal Air Maroc, and not LCC Air Arabia Maroc, while Lome is home to ASKY (affiliated with Ethiopian Airlines) and Nairobi likewise with Kenya Airways. Competition with these intercontinental and large groups could be challenging.

The tenth, eleventh and twelfth routes (the only three other international routes now served from Côte d’Ivoire) are to Tunis, Monrovia and Bobo Dioulasso.

All of Air Côte d’Ivoire's initial routes, operating and virtual, are former destinations of Air Ivoire, which also served points around west Africa (Tomo, Libreville amongst others), Republic of the Congo and France. Mr Décurey has said the anticipated passenger mix would be two-thirds local and one-third foreign.

Whereas Air Côte d’Ivoire predecessor Air Ivoire only operated internationally, Air Côte d’Ivoire is planning to operate to eight domestic destinations from Abidjan beginning in Jan-2013. Like domestic networks in other small growing countries, flights are short but time savings are large owing to slow ground transport on often unpaved and small roads.

Mr Décurey is hopeful Air Côte d’Ivoire's cooperation with fellow Celestair carriers will give it network feed. The country has an estimated population of over 20 million, slightly behind Ghana, which is having a booming domestic expansion, albeit driven by increased competition with profits unclear. Air Côte d’Ivoire could expect a notable domestic network but with less – no – competition. The carrier has made no remarks about fleet expansion, either in reference to size or type. The A319 would be significant over-sizing of capacity for thin routes that need to be served multiple times a day; smaller aircraft will need to be on the cards.

Network benefits also extend from Air Côte d’Ivoire, benefitting other Celestair carriers as well as Air France, which may be sitting on a huge potential for long-haul feed if plans follow through. Air France in May-2012 signed codeshares with Air Mali and Air Burkina and is open to expanding the relationship. More interesting locally are the synergies across the Celestair carriers. There are pan-African ambitions occurring in the form of Fly540, to be re-branded as FastJet, as well as South African Airways mulling the establishment of its Mango or, less likely, SA Express brand elsewhere on the continent.

Benefits of branded pan-continental operations are well-documented but it remains to be seen if the Celestair group can achieve the same synergies now with four carriers, each having a local brand. Africa has the running themes of nations wanting their own flag carrier but the African industry needing consolidation. There are nearly 60 countries on the continent and with the liberalising Yamoussoukro Decision still not implemented, growth is stunted, dictating carriers be small. A common shareholding, like Celestair, to generate synergies could be appropriate for where nations are unwilling to forgo a distinct national carrier.

Also to Celestair's advantage the airlines are flag carriers and could be expected to enjoy elements of protectionism, even if it is to the continent's detriment. But with LCCs and cost-minded carriers making inroads internationally, the Celestair carriers must be efficient. There is no shortage of potential in Africa, but implementation remains the challenge.