Air China, like most of its domestic peers, remains focused on the long term outcome of China becoming the world's largest aviation market. It is the short term that is challenging.

Domestic economic growth lags the targets set for aviation under previously stronger years. Airport slots remain in short supply and competition is fierce amongst China's airlines, even though the majority of capacity is from state-owned carriers.

The response has been to grow as space becomes available, not as demand requires. This helps satisfy national objectives, where any increase in throughput makes a larger economic contribution than would capacity discipline designed to boost a carrier's financial position.

The outcome of these seemingly conflicting goals is that Air China has performed well in difficult conditions. Its 2013 load factor held up while yields decreased 9%, some of this offset by a change in accounting. Top level results show a 51% decrease in group operating profit to RMB4.1 billion (USD785 million), a 4.2% operating margin, helped along by forex gains. Although 2014 ASK growth will slow compared to previous years, it is still high at 14% overall, driven by 9% domestic growth, 22% international growth and 12% regional growth.

Air China favours North American and European routes, but overall it still prefers the long term potential of its domestic heartland. This poses some further short term challenges as premium travel at home has been hit by government imposed austerity measures.

The flag carrier has nonetheless increased premium travel's share of revenue from 15.6% to 16.5% in 2013, although this has occurred mainly through discounting and greater long-haul exposure.

Air China's near-8% system ASK growth in 2013 proved too much to be absorbed. Load factors held flat but at the cost of yields decreasing overall (although this is partially – not entirely) offset by accounting changes. Air China did not provide exact adjusted yields. 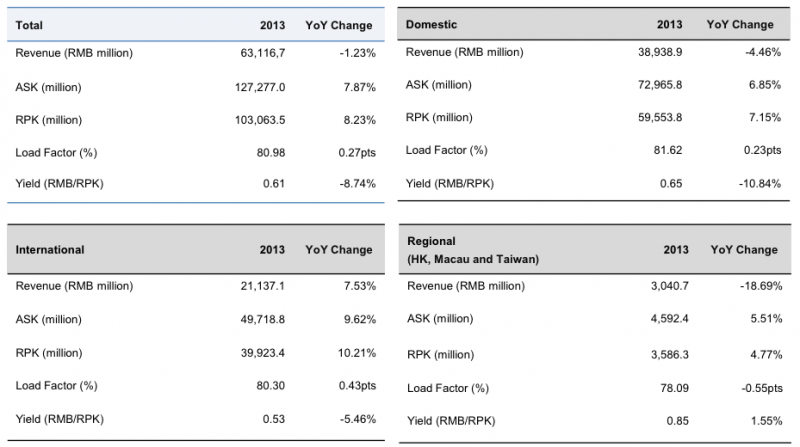 Air China Limited (the group) overall grew ASKs by 8.86% compared to 2012 while RPKs grew slightly faster at 9.40%, leading to a 0.40ppt increase in passenger load factor. This growth is larger than in recent years but below peaks over the past decade (2010 was impacted by the acquisition of Shenzhen Airlines and 2004 as the market recovered from the SARS downturn). 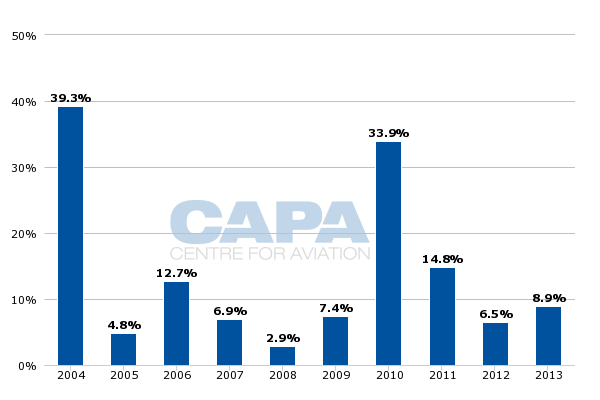 Adding to woes from the slowdown in the economy, China's government has implemented austerity measures that include restricting government travel, both in volume and class of travel. China Southern was early to sound the alarm bell by saying it might re-configure aircraft to reduce premium seat exposure, while China Eastern and Hainan Airlines have commented on decreased premium revenues.

Air China stated it expected to see a decrease in premium revenue since approximately 10% of premium revenues are from those in the public service for work-related travel. However, Air China managed to grow premium revenue in 2013, increasing premium's share of revenue from 15.6% in 2012 to 16.5%.

The probability is that this was only achieved through aggressive price discounts to woo leisure passengers into premium cabins. Additionally, a shift in overall revenue from mainland China to long-haul markets – North America especially – would increase premium sales, offsetting any domestic decrease.

Domestic market to have 9% ASK growth – high, but slower than in past years 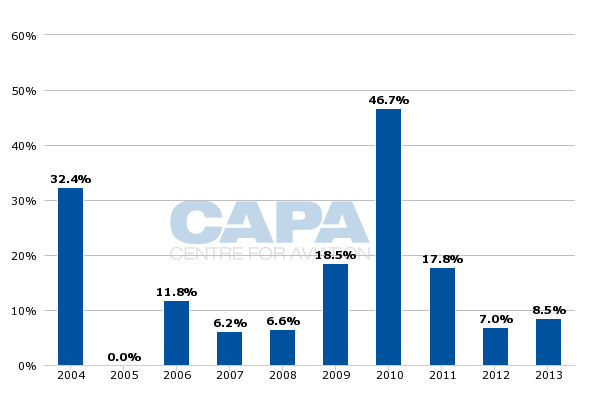 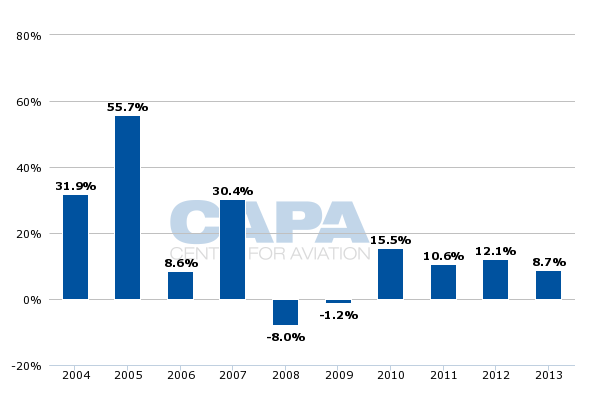 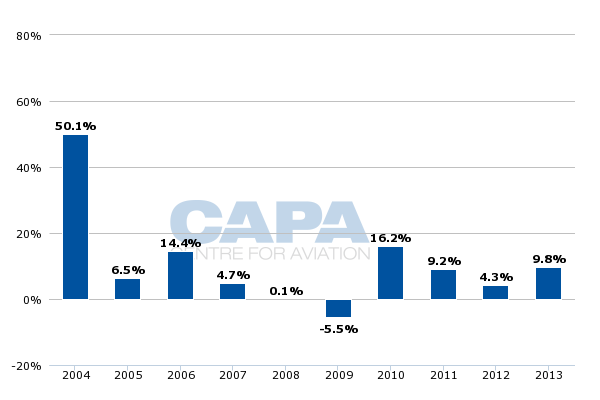 The large growth will be made possible by aircraft deliveries. Air China Group plans to take delivery of 68 aircraft in 2014, including 39 for Air China. Of the 39, 30 will be net growth (due to nine retirements). Air China has not stated a net figure for the group fleet.

Air China Group ended 2013 with 497 aircraft, an increase of about 13% (although the proportion of widebody aircraft increased). 2014 may see group fleet expand at a slower space than in 2013, but still fast at around 10%. This would be in line with growth over the past decade. 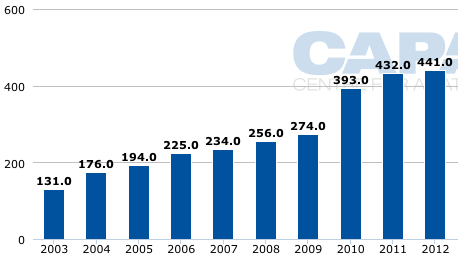 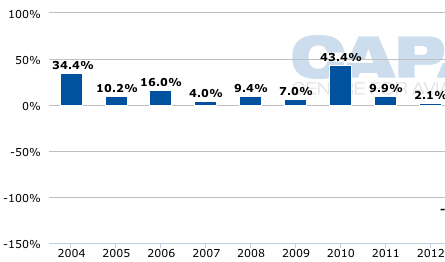 Air China is most bullish internationally on Europe and North America. In 2013 Air China grew 40% in the United States, according to its statistics. Further growth for 2014 includes increasing the frequency on Beijing-Houston, opening Beijing-Washington Dulles service and the already launched (in Jan-2014) Beijing-Hawaii service. Air China will also launch Shanghai-Toronto service.

While Air China has grown its position in North America, profitability has also been helped by moving to more fuel-efficient A330s and 777-300ERs on North American routes.

Later in 2014 Air China is due to overtake United Airlines as the largest carrier between China and North America (United will retain an edge over Air China in the larger Asia-North America market.) 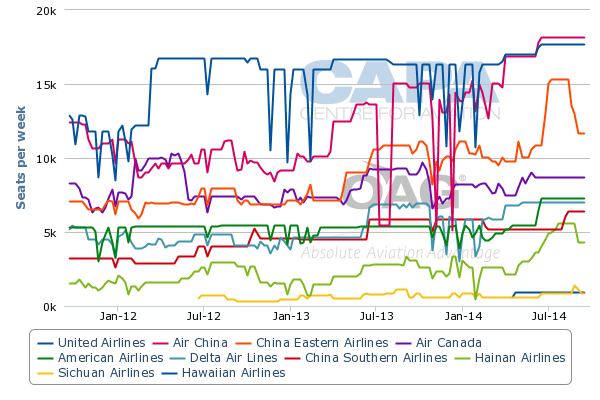 In Europe Air China bedded down seasonality challenges by adjusting capacity. 2014 growth in Europe includes Barcelona and Vienna while Munich will be linked from Shanghai. Germany is China's most important trade partner in Europe, and in 2013 Air China launched Chengdu-Frankfurt services. 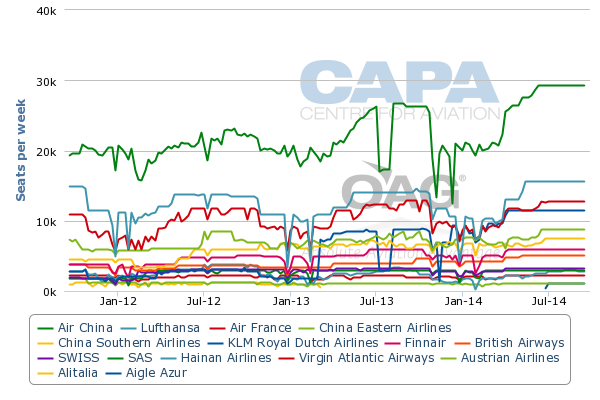 Air China is not optimistic about prospects in Australia-Pacific

Air China's bullishness for Europe and North America contrasts with its pessimistic view of the Australia-Pacific market. This is unsurprising. The Asia-Australia market faces over-capacity. China Southern has made Australia-Pacific its focus, and is aided by a geographical advantage of being based in Guangzhou in southern China, which allows it to pull traffic efficiently from across China.

In comparison Air China's Beijing hub in northern China is not an ideal hub for Australia. Sichuan Airlines, a new entrant in the China-Australia market, has experienced headwinds. Additionally, Air China's strategic and equity partner Cathay Pacific has a large presence in Australia. 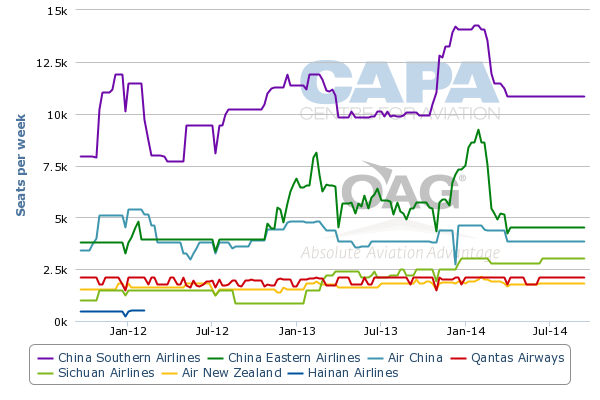 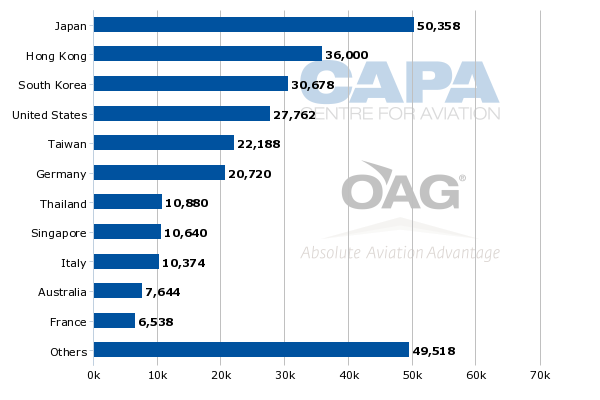 While Chinese carriers are restoring Japanese capacity taken out 18 months ago due to regional conflicts, yields still lag. However, these yields are still high by global standards. 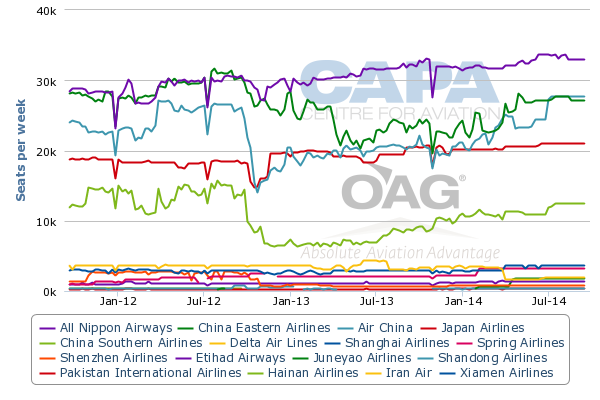 Air China is experiencing an encouraging though not outstanding start to 2014, with year-on-year yield increases in Jan-2014 and Feb-2014 (which must be viewed jointly to adjust for the different holiday period in 2013) but decreases in yield in Mar-2014 – although overall yields are showing gains.

Important cost saving measures will be implemented in 2014 at Air China's cargo division as it retires 747 freighters and takes delivery of four 777 freighters, which Air China expects to reduce operating expenses by 20%. Consequently Air China expects cargo losses to decrease faster in 2014 than in 2013. Dedicated freighter operations continue to be challenging, with Air China reporting better underlying results in cargo carried in the belly of passenger aircraft.

Air China has already taken delivery of one 757 freighter for use in cooperation with EMS. China's express shipment market is growing rapidly, and Air China expects to receive two additional 757 freighters in 2014.

Other cost savings are less forthcoming despite the opportunity

Aside from cargo, other controllable cost savings will be less likely. For Air China to be facing an uncertain revenue outlook without securing improvements through reduced operating expenses is not a good place to be.

This is not due to lack of opportunity. Employee costs continue to rise largely above capacity increase as workforce productivity gains are not realised, a familiar story across Chinese carriers. Being a state-owned enterprise, employee restructures are nearly impossible. Likewise some headwinds were encountered in 2013 with domestic route access charges increasing.

The only bright spots came from reduced jet fuel costs and small gains from lower catering costs. Maintenance costs also decreased, but with Air China retiring some of its older aircraft further gains are difficult to see. Additionally, the lower maintenance costs were more than offset by higher aircraft impairment costs due to retirement. 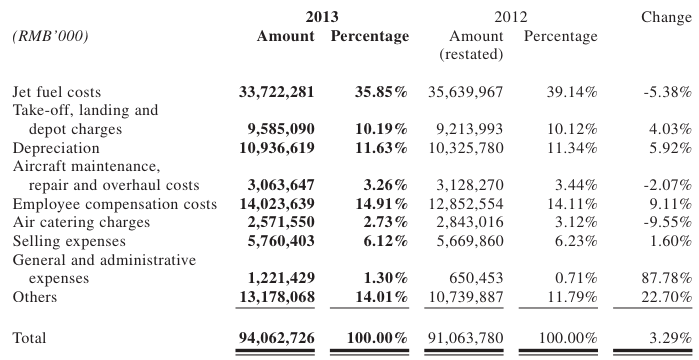 Air China Outlook: A consistently long term objective that could be tested with Beijing's new airport

Air China's outlook must be viewed with a longer than normal telescope. While Air China is managing well despite the significant factors outside its control, its year-to-year performance in almost any other market would leave room for improvement. There are two factors entering the limelight that are relatively new and could challenge Air China.

First is the government's new policy direction supporting home grown low-cost carriers. While an LCC is unlikely to launch at Air China's Beijing Capital hub due to capacity constraints, China Eastern's China United Airlines at Beijing Nanyuan airport does intend to become an LCC and rapidly grow its fleet.

At least one LCC will surely be based at the new Beijing Airport, and there are indications it may include dedicated LCC facilities. More immediately, LCCs are taking shape in other parts of the country where Air China is exposed: Chongqing (near Air China's Chengdu hub) is home to LCC West Air while Spring Airlines is eyeing a larger position at Shenzhen, the main hub for Air China's Shenzhen Airlines subsidiary.

Air China has no official LCC plans as yet but will undoubtedly enter the fray and could look at following China Eastern in converting smaller subsidiaries (especially in China's north) into LCCs.

(2) The effects of added capacity at the new Beijing Airport

The second factor is the medium term impact of what the likely growth profile will be when the new Beijing Airport opens. Not only will Air China face greater competition, it could be forced to respond with greater capacity growth than it has put in the market before – potentially very high levels, if it is to maintain its dominant role in its capital city.

Undoubtedly growth, at that time – and leading up to it – will be flavoured heavily by the long term objective; but this undefined period is constantly being extended, with most of China's airlines continuing to grow unproductively.

So long as the major airlines are subject to this neo-public service role, they will continue to be that much harder to reform. This begins to build an expanding dilemma for Beijing's policymakers.

By opening up the market explicitly to encourage more efficient and often private operators (the CAAC has enthusiastically endorsed the frugally efficient Spring Airlines as a role model) in order to maintain high growth levels, the powerful Big Three are subtly being squeezed into a position where failure to adapt will eventually become fatal. Yet the paradox is that they are not in complete control to adapt.