Air China (-8.6%), Thai Airways (-6.0%), Korean Air (-5.6%) and Malaysia Airlines (-5.2%) were among the leading flag carriers in the region to lose substantial ground in share prices yesterday. Only the Japanese flags, ANA and JAL, remained virtually unaffected, as most airlines moved down in generally negative markets.

The investment market is becoming increasingly uneasy at the financial outlook for the region's airlines, as traffic continues to be slack.

As Thai Airways re-consolidates its operations at Bangkok Suvarnabhumi Airport, the carrier still appears to be floundering as it seeks a government guarantee to help it find its way through a round of refinancing that is vital to continued independence. It does not help in this process that Thai still does not have a permanent CEO - even though permanency at Thai typically has a very temporary nature.

Thai still has no recovery plan and, among other things, has been unable to find a buyer for its A340-500s, with six new A330-300s due to arrive this year. As Thai cuts back on long haul operations, and its debt position becomes more critical, it will almost certainly be looking to delay these deliveries. 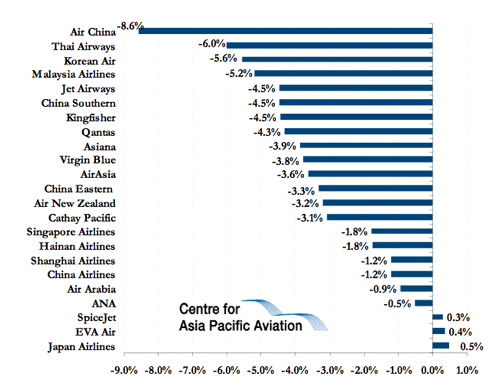 Air China, meanwhile, appears not to have pleased investors, as it pursues "preliminary talks" with East Star Airlines with a view to taking the carrier over. Privately owned East Star ceased operations on 15-Mar-09, but had a useful network in central China, which would fit in well with Air China's network.