Air China’s headline net profit result for the six months ended 30-Jun-2009 looks impressive – a 155% leap to CNY2.88 billion, according to international accounting standards. But remove the significant fuel hedging gains (CNY1.5 billion), government subsidies and grants (CNY971 million) and its share in profits from affiliates, including Cathay Pacific (CNY316 million), this is an airline that is barely turning a profit, after deep losses last year. 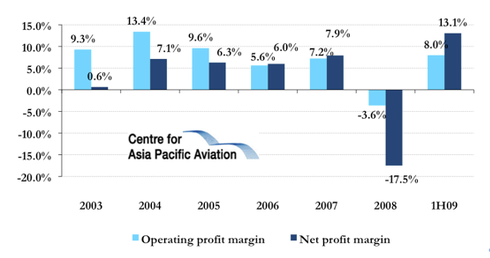 This is despite high growth and a dominant market position. That said, it is performing considerably better than its peers.

Air China’s bottom line also benefitted from a 42.5% reduction in first half jet fuel costs, despite a 6.4% increase in capacity, as traffic rebounded. Air China stated the domestic air passenger market “did better than expected” in the first half of the year.

But it was profitless growth, as yields slumped 11.87% amid the intensely competitive domestic market. Cargo yields have also fallen to their lowest levels in Air China’s history. During the first half of the year, the Group’s air cargo operation handled 1.5 billion FTKs and 423,200 tonnes of freight with a load factor of 49.39%, down 17.7%, 16.2% and 9.3 ppts, respectively.

Overall, Air China stated the continuance of global financial crisis and the swine flu outbreak in the first half of 2009 “brought enormous difficulties for the aviation industry”. First half air traffic revenue slumped 12.7% year-on-year. 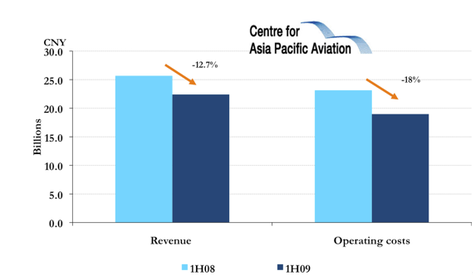 The Group maintained a “prudent” strategy of fleet expansion and reacted to changing market conditions. In the first half of the year, ten new aircraft were added (most of which were narrowbody aircraft such as A321s and B737-800s). At the same time, 11 older B767s, B737-300/600s and B747-200Fs were retired.

In the second half of this year, Air China “anticipates the impact of the global financial crisis on international air passenger and cargo business will continue”.

It sees no upside for yields, stating, “the overly rapid increase in traffic capacity by the domestic airlines and the intensified price competition will affect the ability of the Company to improve its yield…despite the increase in demand in the domestic air passenger market”.

Exchange rate fluctuations and rising fuel price will “further increase the difficulty of the Group’s operation”, according to Air China.

Relatively speaking however, Air China’s performance and outlook is fairly solid. It has manoeuvred China Eastern Airlines into a strategic black hole, is well entrenched within the Star Alliance and has gathered up just shy of 30% of Cathay Pacific’s shares, which positions it well for the eventual economic upturn. See related article: Air China-Cathay Pacific move to shake up Star Alliance and oneworld