China's Big 3 carriers – Air China, China Eastern and China Southern – are operationally performing well, posting 1H2012 operating profits that are down from recent years but well above 2008 when fuel prices were lower. While globally a sound result that many peers would be pleased with, the carriers are fretting over local dynamics with a mixed outlook. The relative slowdown in China's economy is seeing capacity outstrip demand, although this is expected to improve later in 2012 and 2013 with a possible government stimulus.

Premium traffic and frequent flyer revenue are typically up, but so too are labour costs, rising with wage increases. Room for productivity gains is large, although the focus for the remainder of 2012 and 2013 is double-digit capacity growth. Outside of the operating area, a growing concern are large exchange losses as the yuan depreciates against the US dollar, sharply reducing profits. 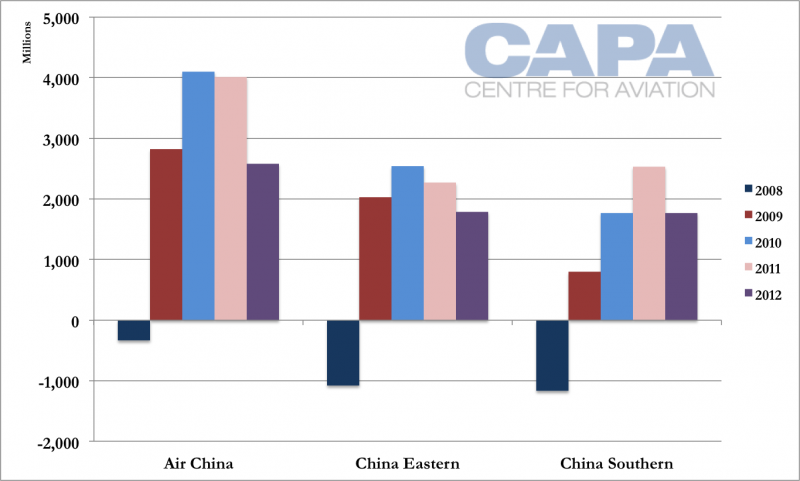 Revenues at the Big 3 were up across the board on the back of an increase in flying, although the outcomes varied by carrier. Air China, with its largest hub by far at capacity-constrained Beijing Capital, flew only 1.7% more RPKs. China Southern, having implemented significant long-haul expansion, saw the highest RPK and revenue growth of double digits in both categories.

As is typical, China Southern had disproportionately lower revenue in relation to passengers flown.

This growth, however, was not enough to offset growth in three areas across the board at the carriers: fuel, yuan depreciation and wage increases.

The increase in fuel prices is a global story and the Big 3 were not immune, but being largely outside of their control and a global occurrence (although the Big 3 do not practice fuel hedging), two domestic cost concerns are higher. First is the depreciation of the yuan against the US dollar, causing shifts higher than fuel price increases (this is reflected at the pre-tax, not operating level).

The depreciation is a sensitive state matter as it is likely being used to reduce the cost of Chinese exports during an era of global demand decrease, thus making Chinese exports more attractive, often to the chagrin of the importing countries. The matter is unlikely to subside in the near future, with consensus being a 1% yuan depreciation is to be expected.

Echoing the larger business community and its concerns, wages are increasing at the Big 3, being driven mainly by salary increases, not the addition of more staff (that is a smaller factor). Wages are the highest expense after fuel, although landing charges can be a close second.

Passengers up but load factors fall

Passenger traffic was up across the board except in two scenarios: Air China's domestic passengers and China Eastern's regional (Hong Kong, Macau and Taiwan) passengers. Air China reduced the domestic share of flights from 59.0% in 1H2011 to 57.4% in 1H2012 and re-deployed the capacity to regional and international markets. This was partially spurned by fleet changes (Air China in 1H2012 had a net increase in fleet by only one aircraft as it took five widebodies in 1H2012 but retired only two while taking seven narrowbodies in 1H2012 but retiring nine).

Air China says it is also seeking to optimise capacity to improve efficiency, with revenue and yields up in the domestic market despite capacity and load factor decreases.

Air China is constrained at its main hub of Beijing Capital, which is slot restricted. It managed to increase capacity in Beijing by 2.7% on the back of 198 additional weekly slots. Growth at its base in Chengdu was 2.6% while it grew Shanghai operations by 8.6%. 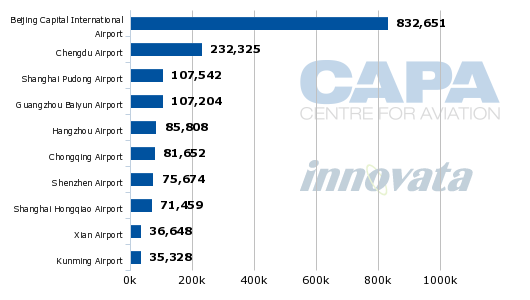 China Eastern saw a 0.7% decrease (RPKs) on regional routes on the back of a 5.8% drop in capacity (ASKs), giving a load factor improvement of 3.4ppts with total revenue for the market down 3.6%, but with yields up 2.5%

China Southern was the story in the international market, increasing RPKs by 27.3%, although this was too much for the market to absorb – even at low prices. China Southern's load factor fell by 1ppt, compared to modest load factor gains at Air China and China Eastern, which had nearly 10% growth on the back of a short-haul international growth, with a focus on North Asia, which tends to be more profitable from China than southeast Asia owing to reduced competition and fewer LCCs.

Yield growth, on the back of fuel surcharges, typically not enough to offset fuel cost

Yields were a mixed story. Air China's domestic yield premium continued while China Southern's international yields drastically decreased on the back of severe discounting in long-haul flights (economy class between Europe and Australia was offered for as low as AUD1000 (USD1037), nearly a 50% discount from typical fares).

China's aviation regulator says Chinese carriers in 1H2012 carried 8.7% more passengers than in 1H2011 while China Southern estimates the total market growth of supply was 7.5% with only a 6.5% increase in passenger numbers. This trend will continue in 2H2012 and 2013 as the Big 3 plot double-digit capacity growth.

Its capacity is currently split between approximately 28% in international markets (including Hong Kong, Macau and Taiwan) and the remaining 72% in domestic. Its objective is to achieve a 30-70 split in the near-term and in recent years has been growing international traffic faster to reach that target (international ASKs grew 27% in 1H2012).

Once China Southern reaches the 30-70 split, expected at the end of the year, it will slow down the rapid expansion. It is coy on long-term traffic balances as it falls under heavy pressure to bring its international network to profitability. Currently the carrier says the 30-70 split is "appropriate", but this could be revised as the international market becomes profitable and as the larger dynamics within the Chinese market change.

The fleet growth in 2013 will permit a 11% capacity increase to correspond to a 10% demand increase. China Southern expects a domestic rebound in 4Q2012. In 2013 it wants to enhance its domestic network while stabilising its international network, although 2H2012 will see some large changes of their own: A380s will finally be deployed on long-haul markets, first on Guangzhou-Los Angeles, replacing Boeing 777-200 service, and then a new Beijing-Paris CDG route operated in partnership with Air China. (The relationship is convoluted, and not finalised, but Air China is already on the route, which under Chinese practice would prohibit a second Chinese carrier, but China Southern needs suitable markets for its A380s.)

Domestic growth will be concentrated in second and third tier cities, with capacity in regions in China's fast-growing western and southwestern provinces to grow over 10%. About 40% of China Southern's revenue is from flights reaching Beijing, Guangzhou, Shanghai and Shenzhen but airports in these cities are restricted. Urumqi, in China's far west, is being established as a China Southern hub to link the country with west Asia and Russia/CIS.

China Eastern in 2H2012 will add a net of 21 aircraft (25 additions but four retirements) with growth following China Southern's 30-70 goal posts; 69% of additional capacity (ASKs) will be added to the domestic market, 31% internationally and none to regional routes. This will see 2H2012 end with domestic accounting for 72%, international 25% and regional 3%.

International growth at China Eastern will see A330s add frequency to European destinations while short-haul international growth will be concentrated in Japan, catering to the outbound tourists growth of 19% year-over-year. Domestic growth at China Eastern has been driven by routes to northern and western regions, including Lanzhou to Beijing, Chengdu to Jiuzhai and Xian to Jiuzhai. Additional growth has been to Lhasa in Tibet as well as inner Mongolia, two markets where Air China has been growing.

Air China, being restrained in Beijing, will take approximately two-thirds of new deliveries over coming years while subsidiaries will take the remaining third. It has not given further details about growth except to say that it will increase long-haul frequencies while growing to Japan, following China Eastern's growth profile.

Cargo has mixed, but not overwhelming, outlook

China Southern is taking a brighter look to 2H2012, expecting new technology – especially in smart phones – to drive growth. Cathay Pacific, which like China Southern is based in the manufacturing hub of the greater Pearl River Delta area, has said it would see encouraging signs for its cargo business if new consumer technology emerged. China Eastern saw an overall 2.4% increase, driven by increases in international cargo but offset by shrinking performance in domestic and regional markets. Load factors saw marginal improvement of 1.6ppts while yields on average fell 4.8%. Its outlook is mixed, reflecting less prime geography for transporting freight than China Southern.

Air China is less confident, calling the situation with cargo "severe". Cargo revenue was down 7.4% in the domestic market and down approximately 26% in each the regional and international markets. Load factors fells 2.8ppts and yields dropped 2.3%.

Outlook: The worst behind, opportunities still abound but greater efficiency is needed

Air China, China Eastern and China Southern all see that the worst is behind them. Although fuel is once again upwards – and the carriers are raising fuel surcharges – the carriers expect the traditionally stronger second half to hold true this year and to be matched with a demand recovery.

But as air transport continues to expand, growing pains are becoming more evident. As the carriers seek to have a better international market, especially China Southern with its rapid long-haul expansion, they are looking to catch up on service. The relocation of Kunming airport as well as a new terminal at Xian, both key cities for China Eastern, allowed the carrier to open new and improved lounges.

Catering costs are growing and not just due to the increasing passenger numbers. With further increases in per unit costs – be it for meals or staff salaries – the carriers will need to become more efficient, a drive that has not been strong as long as there is a government hand to fall back on. Xiamen Airlines, for one, is privately owned (by Chinese standards) and efficient, posting not only consistent profits but respectable margins.

China Southern acknowledges there is a "huge gap" between the health of itself and Xiamen Airlines, which it has a stake in. China Southern is looking to study Xiamen's model in hopes of increasing its own efficiency. Air China already learns from Cathay Pacific, which have cross-equity stakes.

The disappointing 1H2012 may be behind, but Chinese aviation is still two steps forward and one step backwards.