Asian markets rebounded on 15-Dec-08, led by Japanese stocks, as investors brushed aside a survey showing business confidence plunged, on hopes for a US interest-rate cut and after the Bush administration stated it would step in to prevent a failure of US car industry.

Once again rumours of a China Eastern-Shanghai Airlines merger - and the resulting expected improvement in their operational performance - has hit Air China (-8.7%) and China Southern's (-7.5%) share prices. Whether the expectations are well founded will remain to be seen. Despite the atmosphere, China Eastern (-2.8%) - with a questionable future, after all, still fell, but Shanghai Airlines (+3.4%) is obviously considered to be getting the better part of any bargain that emerges.

Meanwhile, as cross-straits direct services begin in earnest today, EVA Air (-4.3%) and China Airlines (-4.2%) shares each fell, with the prospect of greater competition and the erosion of their highly profitable Hong Kong services.

At the other end of Asia, Spicejet continued its resurgence, based on its brighter outlook as a revived LCC in a slowing Indian market. An airline to watch. 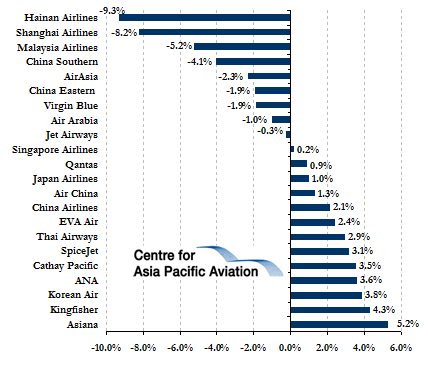