Cargo payload capacity is outperforming passenger capacity, falling less at the depths of the COVID-19 crisis and recovering more quickly, according to weekly data from CAPA and OAG.

Monthly traffic data from IATA highlights an even stronger outperformance of freight traffic transported. In 8M2020, cumulative ACTKs (available cargo tonne kilometres) fell by 24.8% year-on-year, compared with a 14.0% fall in FTKs (freight tonne kilometres), taking freight load factor up by 6.7ppts, to 53.0%. This is still much lower than the depressed level of passenger load factor (down by 15.6ppts, to 67.4%, for 8M2020), but high for the freight sector.

Although capacity operated by freighters has risen, thanks to higher daily utilisation, belly space in passenger aircraft has fallen due to depressed levels of passenger flights. The overall reduction in freight capacity, plus much more robust demand for air cargo versus air passengers, has pushed up cargo yield and load factor. This has the potential to offset lower volumes and drive cargo revenue to positive growth in 2020.

Nevertheless, this is of little comfort to the airline industry and will not offset haemorrhaging passenger revenue.

CAPA tracks freight capacity trends by combining flight schedules data from OAG with cargo payload (in kg) for each aircraft.

There are also significant variations in the percentage decline in cargo payload capacity for each region.

For all regions, these are the lowest percentage declines since the early weeks of the crisis.

Passenger seat capacity is also down heavily in each region, but the fall in freight capacity is several ppts narrower in each case. Asia Pacific is the only region where passenger seat numbers have been reduced by less than 50% year-on-year. 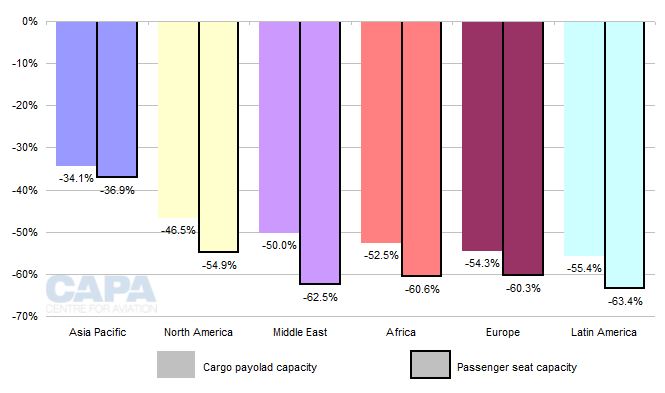 At the lowest phase of the crisis, in Apr/May-2020, the year-on-year fall in passenger seat capacity ranged from -61% for Asia Pacific to -90% for Europe. All regions outside Asia Pacific sank as low as -80% or below for at least one week in that period. 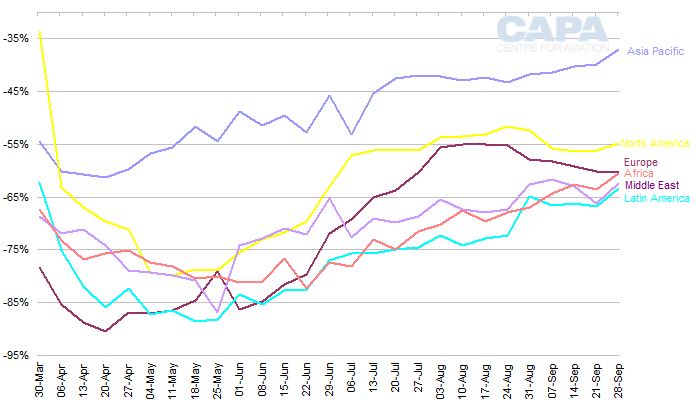 North America bottomed out at -64%, while all other regions (apart from Asia Pacific and North America) sank to -74% for at least one week in that period. 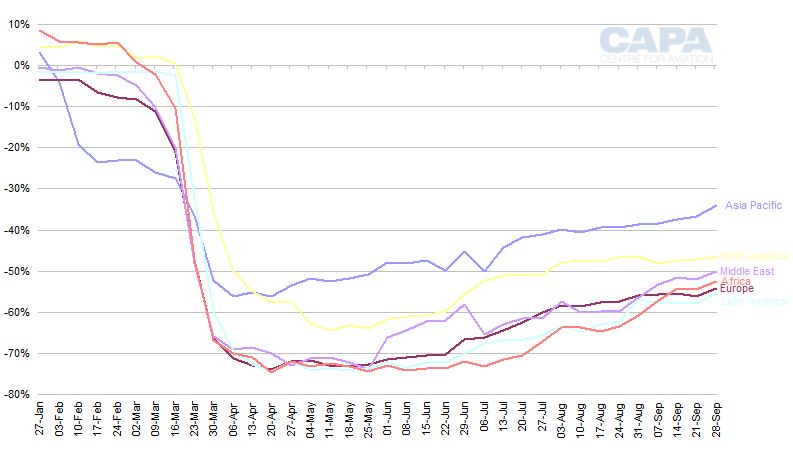 The gap between the two is much wider than seen in the weekly capacity data noted above.

The worst month for both was Apr-2020, when global RPKs fell by 94.3% year-on-year – an almost total shutdown of passenger traffic.

However, FTKs fell by 'only' 27.7% year-on-year in Apr-2020. This was still a cataclysmic fall by any normal standards, but this is not a normal crisis, and it was hugely better than the performance of passenger traffic.

The year-on-year rate of decline has narrowed for both freight and passenger traffic in each subsequent month. However, in Aug-2020 RPKs had only recovered to -75.3%, while FTKs had reached -12.6%.

Although freight traffic is performing much better than passenger traffic, the year-on-year rate of decline for freight has been levelling out. This suggests that its recovery may be losing momentum. 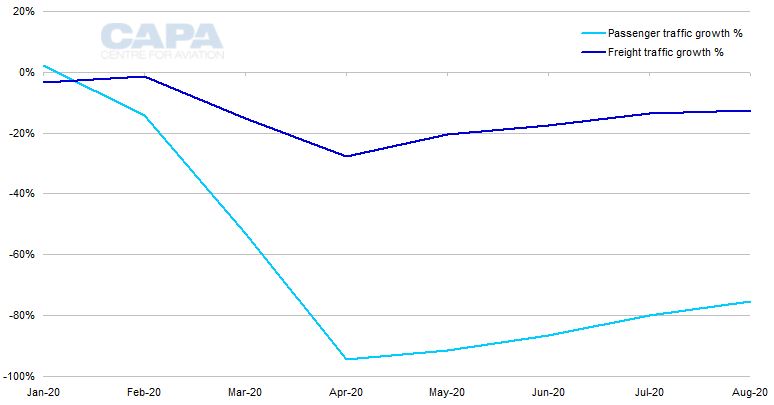 As noted above, data from CAPA/OAG indicate that cargo payload capacity has not fallen as rapidly as passenger seat capacity.

This reflects an increased role played by dedicated freighter aircraft (and a trend of using passenger aircraft as temporary freighters). Freighter capacity has actually risen sharply during the crisis, while cargo capacity in passenger belly space has fallen heavily.

Widebody freighter daily utilisation is close to 11 hours/day – the highest level since IATA began tracking this measure in 2012.

According to IATA, available cargo tonne kilometres (ACTKs) in freighters was up by 28.1% year-on-year in Aug-2020 and has been up by double digit percentages every month since Apr-2020. 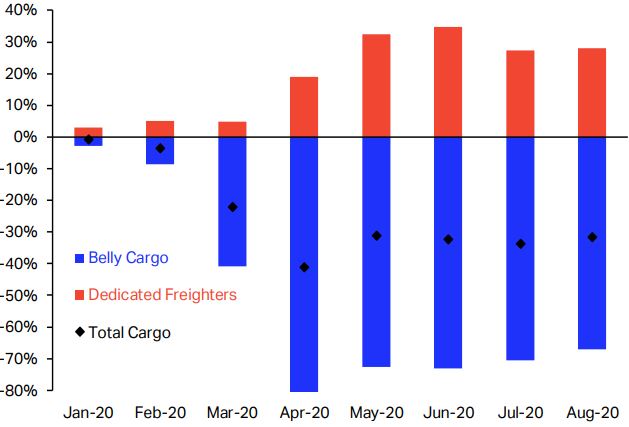 The declines in monthly FTKs reported by IATA are much narrower than the falls in cargo payload capacity from CAPA/OAG data.

(There is also some difference arising from the fact that cargo payload only reports weight, whereas FTKs also take account of distance, but that is less significant.)

Weekly cargo payload capacity from OAG/CAPA data excludes leading integrators such as the express operators FedEx and UPS. Schedules for cargo airlines representing somewhere around half of all freighters in service are missing from the cargo payload analysis.

Given that ACTKs operated by freighters is growing, this means that the OAG/CAPA cargo payload data is understating total air freight capacity and overstating its year-on-year percentage decline.

Nevertheless, this data is useful in identifying trends – such as improving weekly cargo capacity and the outperformance of cargo capacity versus passenger capacity in each region – before the more delayed monthly IATA traffic figures.

Freight load factor is up

The COVID-19 crisis has pushed freight load factors to much higher levels than usual.

This reflects the lack of passenger belly capacity, which is usually more important than freighter capacity, and a much more robust level of demand for air freight compared with demand for passenger air travel.

Outlook for air cargo: volume to rise, but yield to ease back, from current levels

Some Asia Pacific airlines returned to profit in 2Q2020, after big losses in 1Q2020, as a result of strong cargo revenue. Even with cargo volume down year-on-year, revenue grew thanks to strong cargo yields, supported by low capacity and demand for time sensitive shipments.

Air cargo yields reached record highs in Apr/May-2020. They have eased back since then, but remain above pre-crisis levels.

The outlook for air cargo volumes is supported by improving business confidence surveys, although volume could continue to be constrained by capacity issues (driven by a slower than expected return of passenger aircraft).

The return of more passenger aircraft into service, and the consequent addition of belly capacity, could put pressure on cargo yield. IATA's Jul-2020 survey of cargo operators anticipated rising volumes, but falling yields, in the following 12 months.

The airline industry would welcome falling cargo yields and rising cargo volumes relative to their current levels, as this would signal a return to more normal conditions.

However, the outlook for the passenger side of the industry (responsible for 73% of revenue in 2020) remains precarious.

At its most recent forecast of industry economic performance, in Jun-2020, IATA forecast an 8% increase in cargo revenue for 2020. However, it forecast a 61% drop in passenger revenue and a halving of total airline revenue.

Since then, IATA has cut its RPK growth forecast for the year from -55% to -68%. This can only be negative for the yet to be updated revenue forecast.

Even if cargo revenue manages to achieve positive growth, this will not be enough to offset plummeting passenger revenue. The conclusion of previous CAPA analysis reports on the impact of the COVID-19 crisis on air cargo remains unchanged:

Air cargo revenue is more virus-proof than air passengers, but is not enough. Cargo alone cannot save airlines.