Air cargo: few other industries would tolerate its structural overcapacity

IATA's most recent air freight market analysis, published 1-Oct-2014, said "The outlook for air freight markets has started to look better again", but it added that "the extent of future gains could be limited". IATA cautioned that trade volumes are expanding at a slower pace than global economic growth and that gains in business confidence have been slow due to the presence of political and economic risks. Recent concerns in the financial markets about the outlook for global economic growth add to this note of caution about future air cargo demand.

However, air cargo faces much more fundamental problems. It accounted for just 8.6% of total airline industry revenue in 2013, down from 12.4% a decade earlier. Freight load factor was just 45.3% in 2013, compared with almost 80% for the passenger business.

Very few other industries would tolerate such a degree of overcapacity. Perhaps the approach of many LCCs - to ignore cargo - is the right one.

But cargo traffic growth is improving

The contrasting performance of passenger and freight traffic since the financial crisis is further illustrated in the chart below. Passenger traffic has enjoyed a consistent recovery since mid-2009 and has resumed its previous growth trend (albeit from a lower point in 2009 than it would have attained if the financial crisis had not occurred).

Cargo volume also recovered quickly and exceeded its pre-crisis peak in 2010 before falling back to its pre-crisis peak in early 2012 again and then stagnating until early 2013. Since Apr-2013, air cargo growth has been positive for 17 consecutive months (through to the most recently available data for Aug-2014). Seasonally adjusted cargo traffic volume is now above its 2010 peaks and the growth trend is approaching pre-crisis rates. 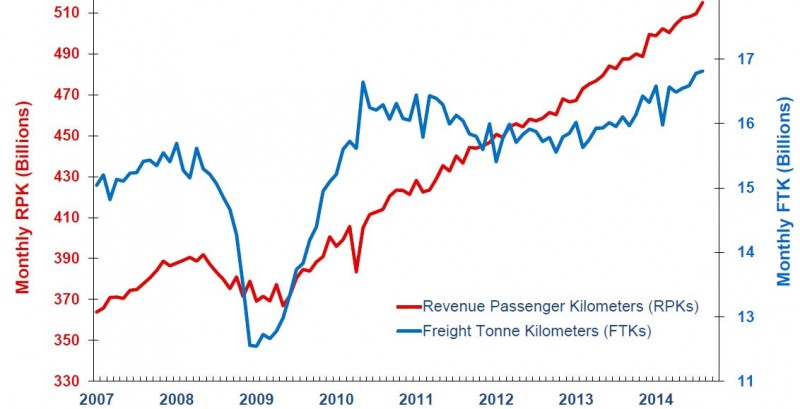 The Middle East is enjoying the fastest growth

Regionally, the fastest growth in air freight volumes for the first eight months of 2014 continued to be in the Middle East, with growth of 9.6%, followed by Asia Pacific with 5.2% (which saw weak cargo performance in 2013). Africa's growth of 4.2% has been close to the world average, while North America (3.0%), Europe (2.7%) and Latin America (just 0.3%) have lagged the other regions of the world so far in 2014.

Air cargo traffic from Europe to Far East and across the North Atlantic were hardest hit in 2009 by the global financial crisis. In spite of this, these two route areas had the weakest recovery in 2010, when the regions 'Within Far East' and North & Mid Pacific led the strong resurgence in cargo traffic.

In 2013, all the major routes were close to zero growth, while 2014 has seen all the major trade lanes return to positive growth in air cargo. North & Mid Pacific has enjoyed the strongest growth so far this year and Within Far East has also performed well. Air cargo growth from Europe to Far East and across the Atlantic is lagging the other two major route areas. 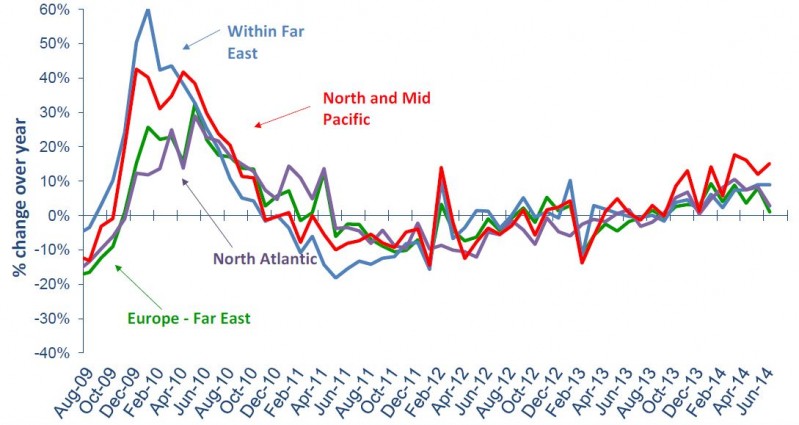 The 4.5% year to date growth in air cargo traffic was faster than the 3.5% increase in capacity (available freight tonne kilometres) and the freight load factor for the first eight months of 2014 of 45.0% was 0.4ppts higher than that reported for the same period of 2013.

The modest gain in year to date freight load factor to Aug-2014 is a small glimmer of hope in an otherwise pitiful trend of freight capacity utilisation by the world's airlines.

Hovering around 46% in the years before the global financial crisis, seasonally adjusted freight load factor fell to around 39% at its lowest point in late 2008, according to IATA data. The rapid recovery drove this measure up above 50% in mid 2010, but it had fallen back to hover around the 45%-46% level by 2012. It has remained stubbornly in this area for almost two years, although recent months hint at a slight upward trend. 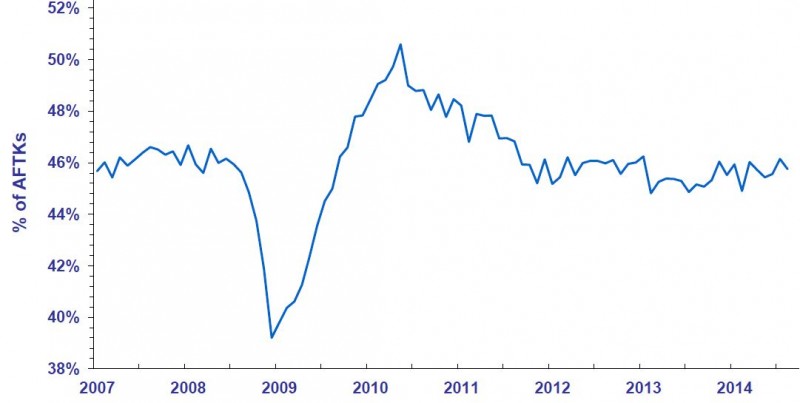 Nevertheless, a global cargo load factor in the mid-40% range compares badly with the 53.8% level reached in the bounce-back year of 2010. It is even below the 49.1% load factor of 2009, when cargo traffic fell by 9%. The industry better adapted capacity to demand at the trough of the recession than it is doing today.

Freight load factors compare horribly with their passenger counterparts, which almost reached 80% in 2013, an improvement of close to 4ppts since 2009. By contrast, the 2013 freight load factor of 45.3% was nearly 4ppts below its 2009 level.

This woeful load factor situation owes much to the split personality of the air cargo sector, with both dedicated freighters and passenger belly holds carrying freight.

According to Boeing, freighter aircraft carry a little over half of freight traffic (around 56% by freight tonne kilometres) and this percentage is expected to remain fairly stable through to 2033. Although freighters carry slightly more than half of the cargo traffic, they account for well under half of cargo capacity. 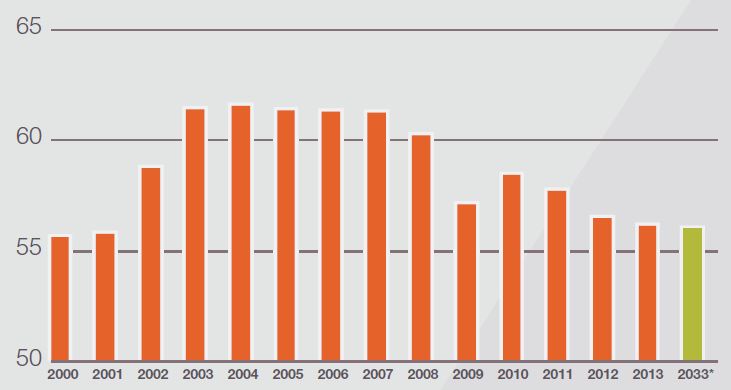 We do not have separate monthly data for the development of freighter and belly hold load factors, but daily utilisation rates for freighter aircraft are on an upward trend in 2014 as demand picks up. Nevertheless, the strong impact of passenger belly space on cargo capacity utilisation remains a crucial factor in the sector.

The size of the global freighter fleet has been reducing since 2005, particularly since the global financial crisis, but the wide body passenger fleet has continued to grow. The accompanying increase in belly freight capacity has countered any positive effect on freight load factor that might have arisen from the reduction in freighter capacity. 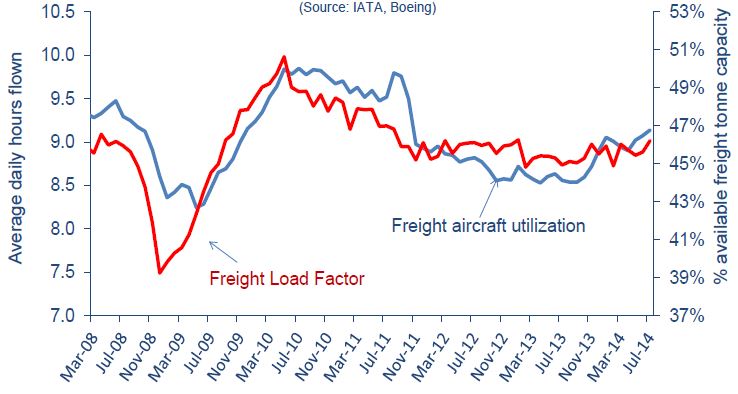 The increase in overall freight load factor in 2010 (see above) coincided with a cut in the size of the freighter fleet and a jump in demand. Although there was also an increase in the wide-body passenger fleet, whose belly space accounts for most of the world’s air cargo capacity, this was relatively modest compared with the 19% increase in demand in 2010. In 2011, cargo demand was flat, but both the freighter fleet and the number of passenger wide-bodies grew, sending freight load factor back down again.

In spite of a further decrease in the freighter fleet in 2012, load factor fell once more as demand fell and belly space increased. In 2013 and 2014, freight load factor has been more stable, in spite of further increases in the wide body passenger fleet, but cargo yields have continued to fall. 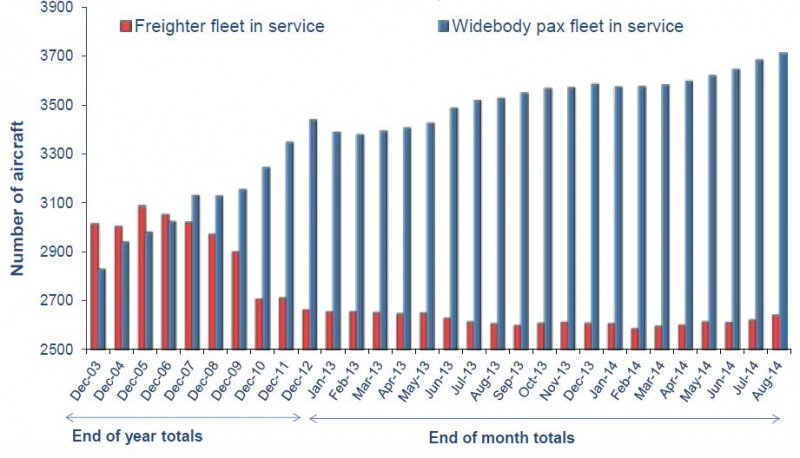 Cargo yield has also under-performed against passenger, but may be stabilising

According to IATA data, cargo yield growth under-performed against passenger yield growth in seven years out of 10 from 2004 to 2013. Cargo yield fell by more than 4% in each of 2012 and 2013, although IATA's most recent forecast points to a lesser fall of 1.5% in 2014. Data published by IATA and sourced to Drewry and CASS shows that air freight rates were falling in the first half of 2014, but that they had stabilised by Jul-2014. 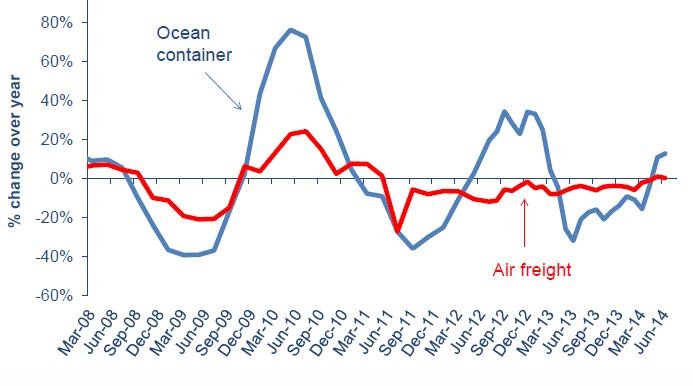 Positive indicators for air cargo, but a note of caution too

Perhaps taking their cue from the modestly improving trends on cargo traffic and yield, air cargo heads surveyed by IATA in Jul-2014 had a positive expectation for the development of both traffic and yield over the next 12 months.

More broadly, air cargo demand is closely linked to world trade and business confidence and both of these factors are on an upward path. Nevertheless, the clouding global economic outlook underlines the need for some caution with respect to demand. 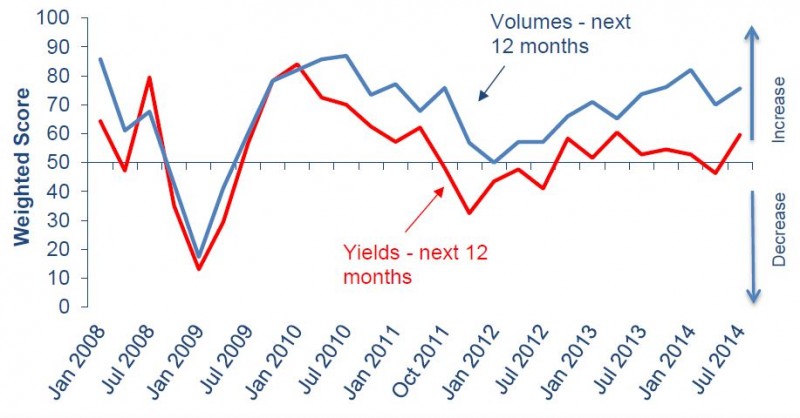 Belly space is not free

Regardless of the demand outlook, an industry that uses less than half of the capacity that it offers is in serious need of structural change. Demand follows the cycle, but air cargo capacity seems to be in a permanent state of oversupply. The capacity offered is almost always more than twice the level of demand.

This argument seems to engender an attitude that sees belly freight capacity almost as a free resource. This ignores the impact that belly capacity has on the overcapacity situation in air freight markets, placing downward pressure on yields across the industry. Moreover, it ignores the capital costs of acquiring this space. If belly space cannot be filled, it should not be designed into aircraft.

It is incumbent on the aviation industry, including airline management - both passenger and cargo - and airframers, to apply the capacity discipline now widely adopted in the passenger business to air cargo.